When was the last time you spent a quiet moment just doing nothing - just sitting and looking at the sea, or watching the wind blowing the tree limbs, or waves rippling on a pond, a flickering candle or children playing in the park? 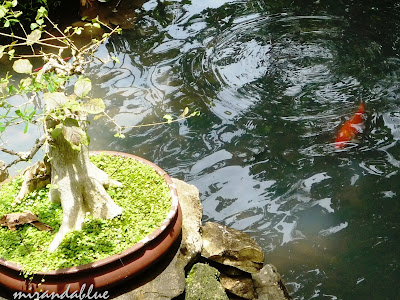 I spent some quiet time at this koi pond in Palaisdaan, a restaurant in Tayabas. Koi are cold-water fish but they do not react well to long cold winter temperatures. The best temperature for koi is 15-25 degrees C. Common carp or Koi in Japan were developed in the 1820's, and are still very popular in Japanese culture as a symbol of love and friendship.

Japanese legend says that if a koi succeeded in climbing the waterfalls at a point called Dragon Gate in the Yellow River, it would be transformed into a dragon. Based on that legend, koi became a symbol of worldly aspiration and advancement. In Buddhism, koi represent courage. Humans "swim" through the "ocean of suffering" without fear, just like a fish swims through water. This is probably why the Japanese generally associate koi with perseverance in adversity and strength of purpose. 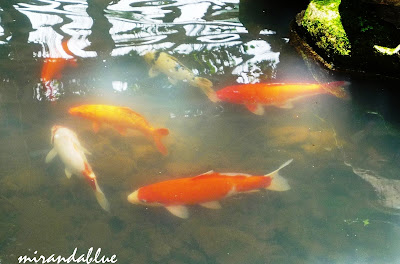 Koi can recognize the person feeding them and gather around him or her at feeding times. They can be trained to take food from one's hand. Koi can live for centuries. One famous scarlet koi, named "Hanako" (c. 1751 – July 7, 1977) was owned by several individuals, the last of which was Dr. Komei Koshihara. Hanako was reportedly 226 years old upon her death. Her age was determined by removing one of her scales and examining it extensively in 1966. She is (to date) the longest-lived koi fish ever recorded. (Source: Wikipedia) 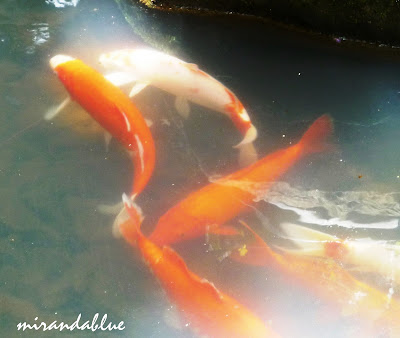 Get wet at Watery Wednesday

Very interesting info about Koi... if I am not mistaken they are quite expensive...

Koi...
seems to be one mythical being but still there's a lot of them in pet shops

Me, too I can just sit in the Japanese Garden and be at peace with nature. That's an interesting story about Hanako. I never thought of the longevity, very informative post.

I have quiet moments everyday, not at a pond, just in my comfi living room or out on the porch under the sky.

The last time I was sitting doing nothing was about four years ago. I was watching the sea waves toss the sun's reflections on the water. I got dizzy and almost puked. LOL I was on a ship and I was being tossed as well.

In any event, you have good shots of the koi fish. And I learned something about them here.

Wow, what great story and info. Never thought it would be associated with a dragon. :) Great post for WW.

I wonder how long will Koi survive in my house. The kids may give it some psychological disorder :) Move fishie move... I learned a lot from your story. I wish I could spend time at that pond - so colorful...

Nice and fitting post for Watery Wednesday! I love kois, I think they are very lovely to look at especially if they swim in groups. Oh and thanks for those wonderful infos about them!

wow! before it man made ponds only contain tilapias now it's koi. the colors of each koi makes the pond beautiful.

They are so cute, Luna. We still have that here in our school little pond. :) I wish i can hold them. hehee

MIne is now up!

The pond look very relaxing but the story with the photos was great, it's nice to learn a little something throughout the photo challenges!

Very interesting post about a very colorful fish! I had no idea they could be so old! Great shots also!

Lovely photos and I really enjoyed the information you shared about the Koi. I like the story of them swimming upstream to become a dragon. I didn't now goldfish could get as big as Koi until I had some long enough to see it.

I searched the net, and found many references to the 226 year old koi. Strange that supposedly they only average 20-30 years.

Fun post, Miranda. One of my customers keeps koi ponds, and I will ask her what she has heard...

I've only been to the Palaisdaan in Tayabas once, but I didn't see the koi pond then. I guess it didn't help that we went there at night ;)