The Rizal Diorama [My World-Tuesday] 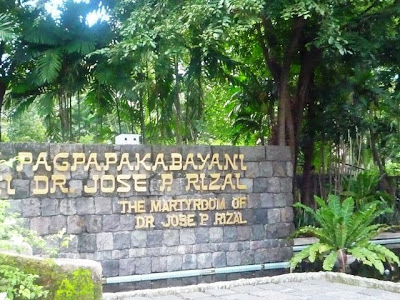 As promised in my last week's Luneta post, I returned to the park on Saturday afternoon to see the Rizal Diorama.  The Rizal Diorama is the actual location of his execution on December 30, 1896.  It is located on the north side of the Rizal monument, in a small enclosed section of the park. 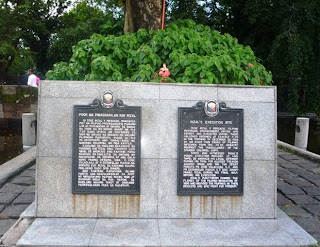 The area is protected by a  stone wall, a moat with a stone bridge.  The small bridge leads to a black marble wall where Rizal's poem "Mi Ultimo Adios" is engraved. 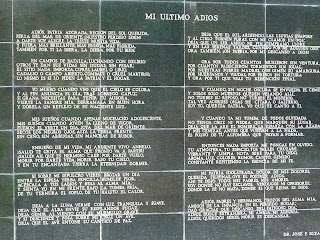 The poem, "Mi Ultimo Adios" (My Last Farewell), was written by Rizal on the eve of his execution as many believed.   The poem was actually untitled, undated and unsigned when Rizal's sisters found the folded paper hidden in a small alcohol stove.  On the afternoon of December 29, 1896, a day before his execution, Rizal was visited by his mother, sisters and two nephews.  When the family was about to leave, Rizal told his sister Trinidad, in English (the Spanish guards didn't understand English), that there was something in the small alcohol stove.   The Rizals reproduced copies of the 14 five-line stanzas and sent them to friends in the country and abroad.  The poem was published in the first issue of La Independencia in 1898 entitled "Ultimo Adios", thus Rizal's poem became popularly known as "Ultimo Adios" or "Mi Ultimo Adios".


Before and after Rizal, many innocent Filipinos have been executed in this area of Bagumbayan (the old name of Luneta) by the Spanish colonizers.  Falsely accused of masterminding the Cavite rebellion, the 3 priests, Fathers Gomez, Burgos and Zamora were garroted here in 1872.  In 1897, 13 Filipinos were also executed in Bagumbayan---casualties of Spanish pressure against the revolutionary Katipunan, an anti-Spanish revolutionary society.  Many unsung heroes died in Bagumbayan--patriots from Bicol, Capiz and other parts of the country were brought to Manila and executed in Bagumbayan.  The Spanish version of the "Killing Fields". 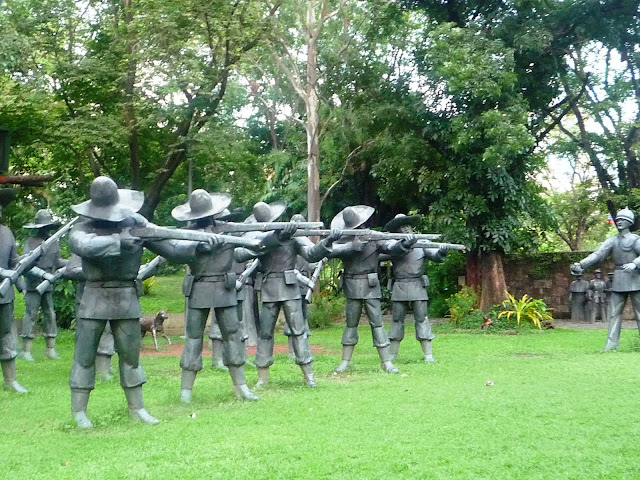 Larger-than-life dioramas show Rizal's final days in captivity and his death at the hands of his countrymen.  The Spanish authorities used Filipino, not Spanish, soldiers for his firing squad.  I was awed by the size of these bronze statues--they're about 8-10 feet tall.  It costs about 22 cents to see this diorama; about a dollar to see the light-and-sound  presentation at 7 pm.  I wanted to see the light-and-sound presentation but the gate-keeper said that there were only 6 of us who wanted to see it, they needed at least 15 people.:( 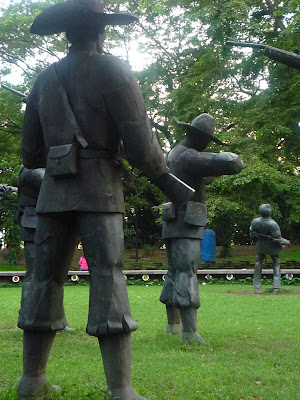 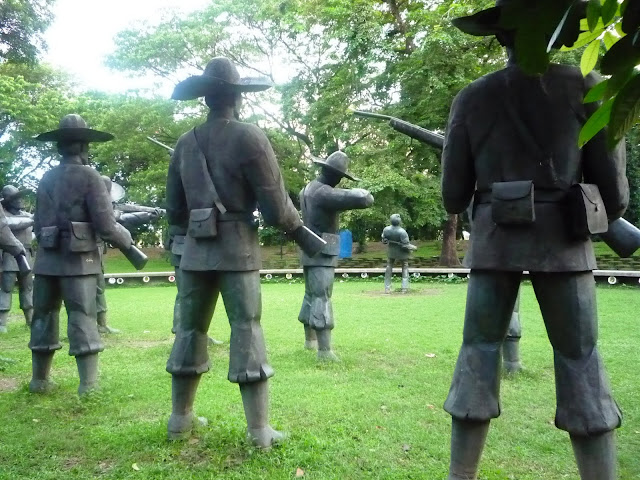 I have read some articles that Rizal's last act of defiance was to face away from his Filipino firing squad.  That is a bit incorrect because his statue here is supposed to represent him spinning away from the firing squad in a last effort to die looking up to the sky, instead of breathing his last facing down.

Some historians wrote that Rizal's last request was to be shot facing his executioners, but the Spaniards refused, citing a Spanish law that seditionists are to be shot in the back.  Legend has it that as bullets hit his back, with superhuman effort, Rizal spun himself so he could die facing the sky. 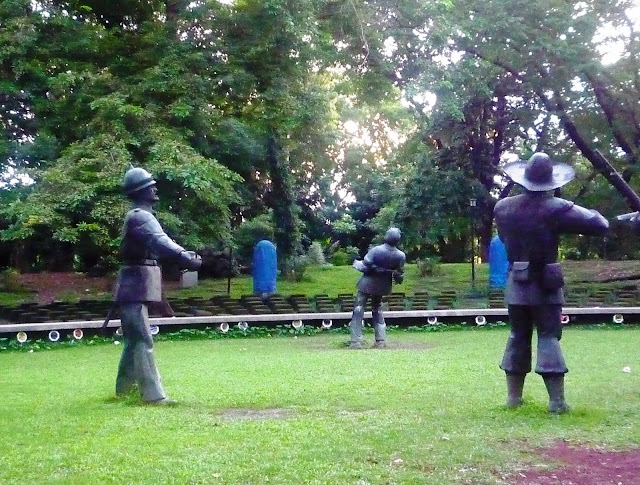 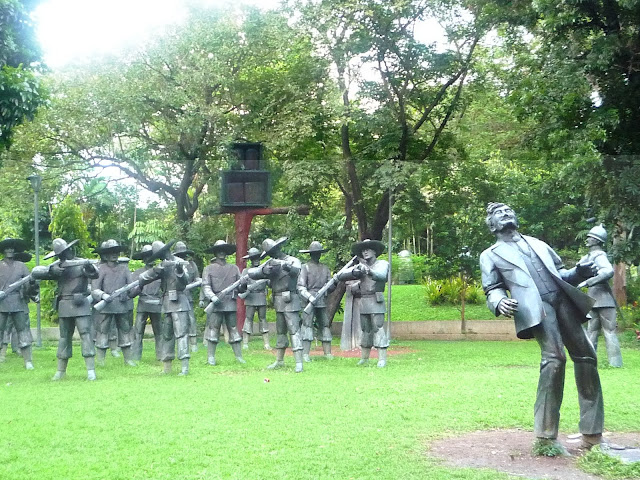 I sat on the concrete stool and contemplated  at the horrible scene...I almost cried.  I  regret that I never paid much attention to my Rizal classes in school.  His books "Noli Me Tangere" and "El Filibusterismo" are obligatory for high school students in the Philippines, and truth be told, I only read those books because I needed to.  I think it's about time I reacquaint myself with the works of Rizal. 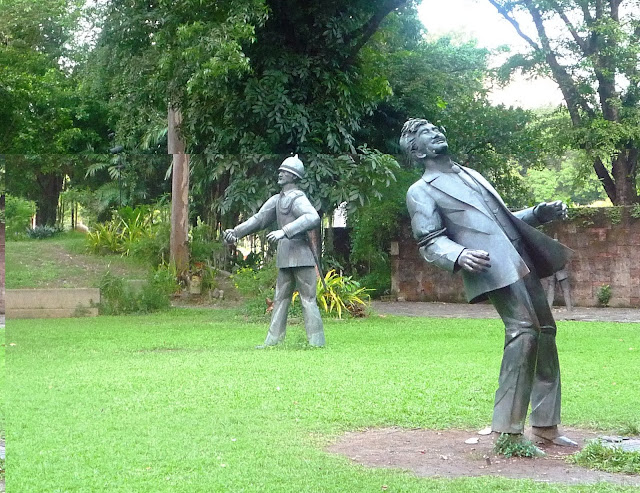 The Rizal monument viewed from the stone bridge. 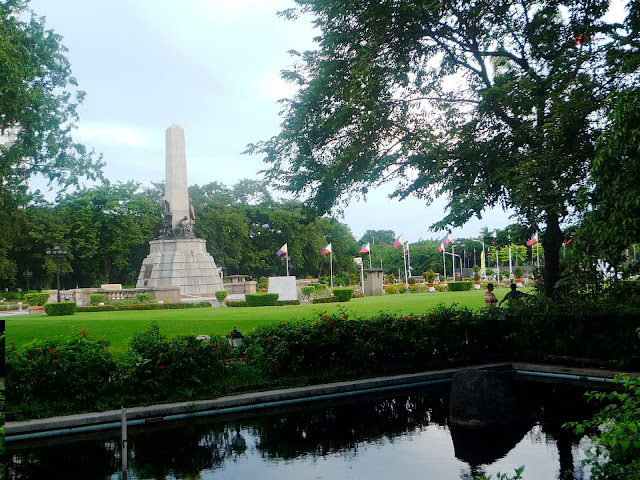 P.S.  Across the Rizal monument, at the Quirino grandstand grounds,  a hostage crisis involving a dismissed police officer and a bus with more than 20 tourists from Hong Kong happened today.  The hostage crisis ended after a 10-hour negotiations, the police assaulted the bus, and the hostage-taker killed by a sniper's bullet earlier this evening.  At least 7 wounded hostages were brought to the hospital.  Aside from the 9 hostages released earlier today, there are no news on others survivors.  A sad day, indeed.

Thank you so much for sharing this very sad history with us! What a moving scene the statues create! Amazing! Your photos are superb as always. And the hostage crisis had to have been frightening. It's sad that those kinds of things continue to happen all over the world these days. Incredible post for the day!

A very nice tribute to our national hero Luna! Yes it was a sad day yesterday.

Colonialism is and was horrible for denigrating entire groups of people in the name of wealth. Awful.

Rizal was a brilliant hero. I remember in our Spanish class, we had to memorize Mi Ultimo Adios. Like you, we read it because it was part of the curriculum. I wish I could understand the deeper meaning of his writings.

laughing here. because the truth is i havent been to that area of luneta. i dont even know where it is in that area. i should find it.

What sad history in such a lovely place.

I haven't been to this part of Luneta yet & my list of "must-see" place there is getting longer. These is such a fantastic post honoring our hero. Thanks for that. :)

Very interesting post and the sculptures are amazing ! so lively !

Oh, what a sad story and incredible memorial. It's doubly bad to execute artists.

Really touching! I can understand your pain at these sights, but these are necessary reminders for the future generations.

Hope everybody else survived from the bus.

These impressive statues come to life through your photos and detailed account of events as they happened in history. Innocent lives are lost in heroic battles as well as in senseless acts such as the current bus episode. Sometimes being at the wrong place at the wrong time turns an ordinary day into tragedy. A lot has happened and you explained events as they unfolded in an excellent way.

WIll make time to visit this next trip to Manila. Great info & pictures.... Now I am re-reading Jose Rizal's Noli... great read.

Lucky you to be able to take photos of the Rizal diorama. I've always wanted to take photos but there were too many people around the rare times I went there. By the way, you should check out Ambeth Ocampo's Rizal Without the Overcoat. The book has some really interesting personal facts about our hero, a must-read for every Filipino.

The Philippines have had such a sad history of occupation. It boggles my mind that humans can be so cruel to each other.

Yes, I heard on the news about the bus hostages. What drives people to do these things? I dunno!

Funny that I was also thinking of re-reading Rizal's books while reading your post. Never really paid attention during high school. Tsk tsk.. Thanks for the tour, I too never even thought that there is such a lovely diorama at the park.

And not to end on a sad note, I grieve not only for the HK people but for us as well. It truly was an unfortunate event that we wish to erase from our history.

I have never seen the diorama. Very nice reporting for MY World.

I had a tough time memorizing Mi Ultimo Adios for Spanish IV class in college. The professor would pick out from a box a small piece of paper with a stanza number written on it and that's the stanza you would recite. So it's doubly tough than just reciting the poem from start to end.

what does the tableau depict? thanks!