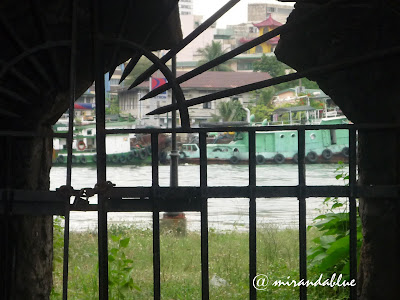 A rusted padlock secures this recessed gate in Fort Santiago, one of the oldest Spanish stone fortresses in the Philippines. The view from this locked postern far north of Plaza Armas is the dying Pasig River, choked with industrial waste and garbage. This gate is called Postigo de la Nuestra Senora de Soledad (Postern of our Lady of Solitude), an escape passage of a Spanish Governor-General in 1762 when British soldiers captured Manila. 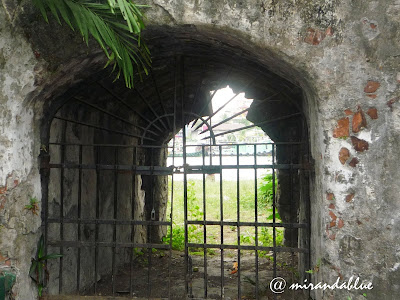 Posted for Photo-Hunt
Posted by Unknown at 12:19 AM

I wonder if there's any hope for that river. It seems a shame to spoil a super view like that. Great post for the theme. My ”Lock” entry is up. Hope you can stop by!

Nice take on the theme. I love the way you made the gate a frame of the photo. Great shots.

What a cool looking old lock!

Great shots! I love the "looking through" perspective.

Great photo! Sorry the river is in bad shape! You have to write to Bobby Kennedy, Jr who helped clean up the Hudson River in New York!

Love these old fortress, so much history and character. Wonderful shots.

Re my post: yeah that was in a pool. But that water lock is a lock for the water in the bathrooms.

Thank you for dropping by.

Neat. A pitty about the river, but the gate is great.

I just happened to read about when the Spanish had to leave the wonderful Philiphines - this very very Saturday.

Your Lock Photos are fabulous - I adore them, really.

It is a beautiful gate, but a somber place indeed. Mine is up here.

Nice take on the theme and fantastic shots!!

Those are beautiful shots and a great take on the theme. That's sad that the river is dying from industrial waste.

I can just imagine the history behind these gates.

lovely shots and i agree it's very sad.

Those are great shots. It has been a while since my last visit to Fort Santiago. I'd like to take my son there.