Palawan, more than the usual beach 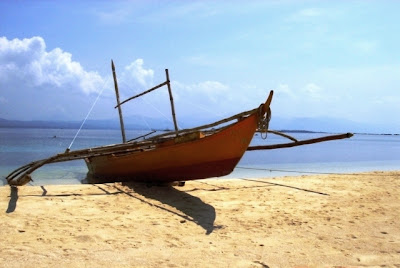 illegal parking
Enough has been said about the natural beauty of Palawan---it is said to be the Philippines’ last frontier and has been declared as a nature sanctuary of the world. Who has never heard or seen the astounding natural beauty of El Nido, Calauit, Coron, Tubbattaha Reefs, the outstanding dive sites, rainforests, primeval caves, and pristine beaches? I’ve been saving for an El Nido vacation but blame it on the never-ending ‘Sale’ at the malls, food trips, and other pocket-draining activities, I still couldn’t afford a trip to El Nido. To satisfy a long-time dream of setting foot in Palawan, I spent my 6-day vacation in Puerto Princesa with my friend Cecille last summer. 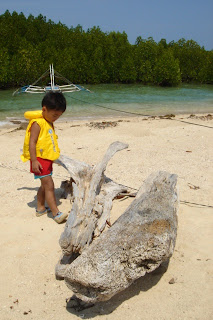 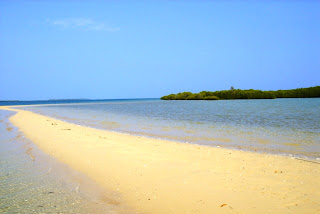 Framing the intriguing and rugged coastline of Puerto Princesa is Honda Bay. Islets with white sand beaches dot the crystalline blue waters. Snorkeled in Snake island and fed the fish---I've never seen such explosion of colors underwater before in my life! Schools of fish are everywhere...in various shapes and colors. I can say now that I've swum with the fishes. :D We island-hopped to 2 other islets, the Starfish Island and the Lu-Li Island (as in lulubog-lilitaw...the island disappears at high tide during the rainy months of June to September). 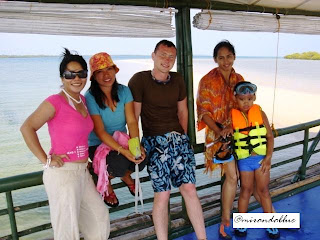 cecille with our tour group 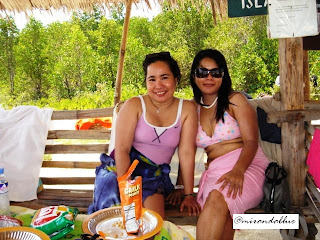 after lunch at snake island 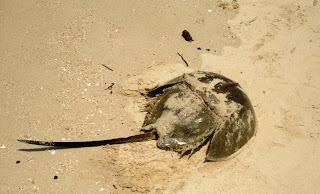 what creature is this? 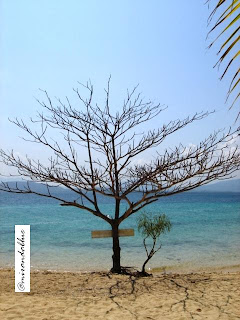 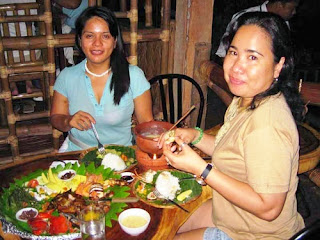 The best part of my Palawan vacation is the food! Fresh seafoods were so inexpensive. We tried the best restaurants in town--Kalui, Bilao at Palayok, Kinabuchs...they are all value for money. But we missed having dinner at Badjao Seafront Restaurant---we fell asleep after a whole day at Honda Bay and woke up around 10pm. Badjao was already close when we got there. 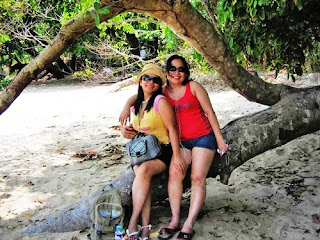 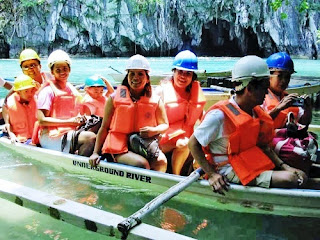 boat-ride to underground river
A two and a half-hour drive from Puerto Princesa and a 20-minute boat ride from Sabang brought us to the Subterranean River National Park in Bahile. It takes the first time visitor like me into the breathtakingly rugged beauty of Ulugan Bay. Limestone cliffs standing guard over crystal waters, most of them uninhabited. Millions of years of wave action have carved and shaped these rocks into something awesome and majestic. 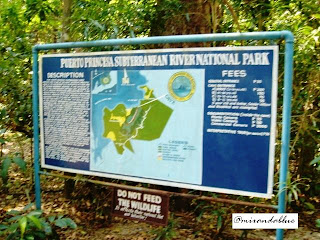 puerto princesa subterranean river, a world heritage site
Canoeing into the subterranean river was a mixture of excitement and fear of the unknown. With only a small spotlight lighting our way, our boatman/guide told us that the underground river has a total length of 8.2 km but we're only allowed to navigate 2.3 km. It’s one of the world's wonders and reputed to be the world's longest underground river. Inside the cave are various shapes of stalagmite and stalactite pillars---some in shapes of corn, puso ng saging, mushroom, a melted candle ( a guy in front of me said it looks like a rotten tooth ); there are even formations that resemble the Holy Family and Jesus' face! There were bats, a shy snake, marble cliffs and the highest cavern reaches up to the 65 meters. There were some marks on the walls of the cave...one was "1937", perhaps made by some explorer.
At the camp site, the monitor lizards were walking around, curious of visitors invading their neighborhood. The monkeys were also quite sociable...they even grabbed some bananas and watermelon from the picnic table! 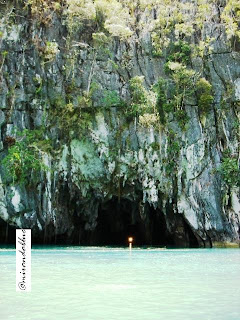 one of the world's wonders 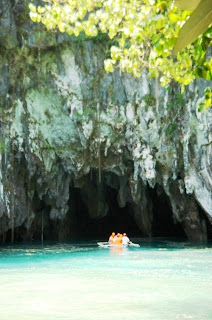 Somebody said that like clouds, the limestone formations in Palawan are subject to interpretation---like these jagged marble pillars pointing to the heavens. 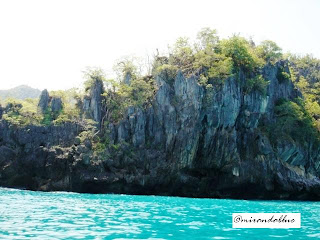 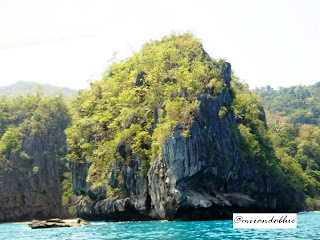 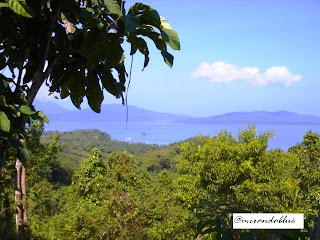 We hired a tricycle and visited Iwahig Penal Colony, the butterfly farm, Mitra's Farm and the WW II American cuartel near the cathedral. We walked the streets after dinner, had coffee at Itoy's (Puerto's version of Starbucks), cooled down at the fountain in front of of the capitol. We ate halo-halo at Chowking every afternoon and had a massage. Life's great! I wished I'd never go back to Manila! 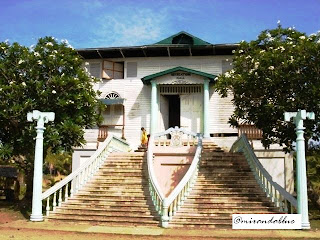 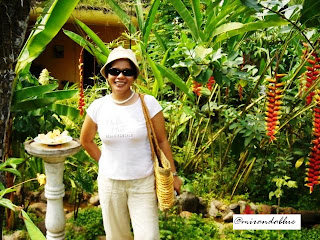 cecille at the butterfly farm

It was Holy Week so on Viernes Santo, I followed the faithful climb the Calvary Mountain. The innkeeper told me that there's a Sinakulo with 'real' crucifixion. We waited and waited---no crucifixion. The Dutch guy, the German with his Filipina girlfriend, the married couple from England, the two Filipino guys from Singapore and myself walked back to the city, disappointed. Good thing the German guy bought mango shake for everybody! :D 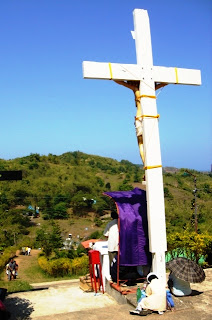 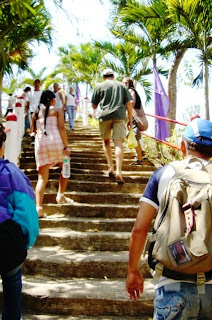 The Plaza Cuartel was a Japanese garrison during World War II where 143 American soldiers were burned alive. 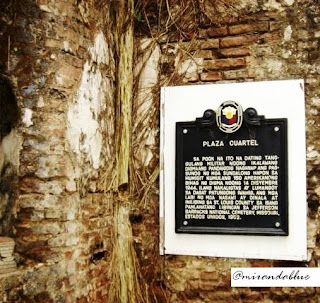 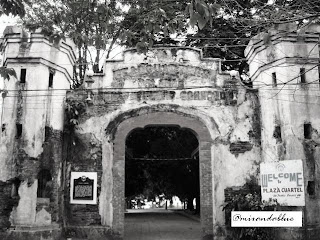 with a dark past 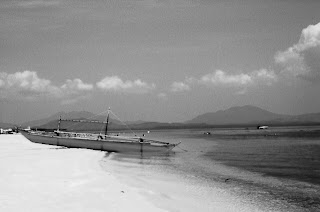 snake island, honda bay
Palawan has indeed extraordinary scenic wonders. But don't just take my word for it---go and see for yourself.
Posted by Unknown at 5:36 PM

You just made a sale! I am going to go and see Palawan with all its glory. When is a good time to visit?

I really love Palawan and given a chance, I wont hesitate to go back there again. Such a beautiful place.

It seems you had a great time there!
I really want to go to Palawan soon!

May convincing power pa pala ako! hahahaha Summer is still the best time to visit Palawan, bertn. If you're making a trip to Puerto Princesa, I can give a contact person to arrange your underground river and honda bay tours. :D

I agree, Lawstude. I've only seen the Puerto Princesa part of Palawan. Planning to explore Coron in May. Thanks for visiting.

I did have a great time, Sidney. Palawan is a 'must-see' in the Philippines. Looking forward to your Palawan photos soon. Salamat!

Maybe one of these days I'll get to experience Palawan and the fresh and affordable seafood that you speak of.

that strange-looking animal is a horse shoe crab...