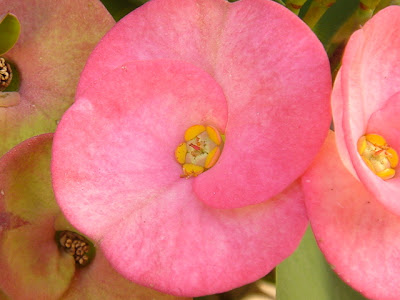 I took photos of this flower in my friend’s garden in Angeles City last week, and posted it in my last blog. Gzel asked for a name of this plant and I had to ask around. A co-worker identified it as Euphorbia. I googled and found that it is also called “Crown of Thorns”. Euphorbia is a very large genus with over 2000 species. The sap is poisonous, can burn skin, and can cause temporary blindness if it goes in the eyes. 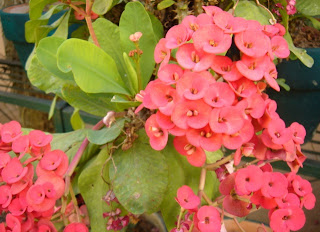 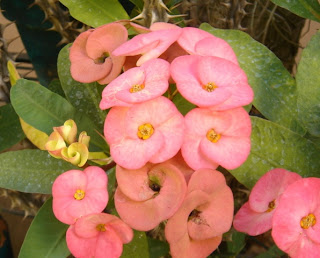 Euphorbia milii var splendens is a straggly, spiny shrub bearing bright red bracts and, given a chance, will grow to 2m. Euphorbia milii was named by Des Moulins in 1826 and, while not a succulent, can withstand long dry periods when the plants will shed their leaves. The stems are furrowed and furnished with stout, tapering spines about 2cm long. The leaves occur at the top of the shoots and the branched inflorescences grow from the leaf axils. The variety splendens is simply a larger form than the species itself and occurs naturally. In fact there is considerable variation in the wild in south-west Madagascar and several have been named, including a yellow flowered form, also grown for the pot plant industry. 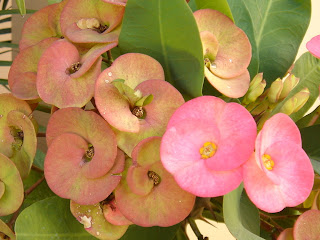 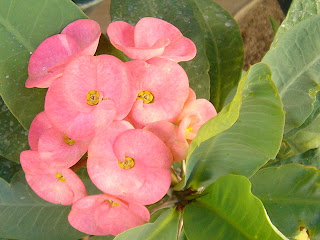 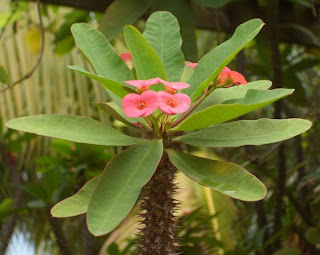 Arni, whose garden these photos were taken, is a former colleague vacationing from NYC. She took care of me when I visited New York for the first time a few years ago; gave me a tour, and brought me to Broadway to see “Mama Mia”. I drove to Angeles City last week, stayed overnight, and we went to see a movie in SM Clark---Arni and I were movie buddies and we had been teased in the office that we attended more "Lupang Hinirang" in the theater than in school because we were fond of going to the movies during the last full show. After Arni left for New York, I was a regular patron of Greenbelt's "midnight workaholics" with screening time after midnight on Fridays and Saturdays. Oh, those were the days! :D

And one shouldn't leave Pampanga without dining at the famous Aling Lucing’s, home of the original Sisig. We braved the smoke from the ihaw-ihaw just to taste the appetizing Sisig one more time. 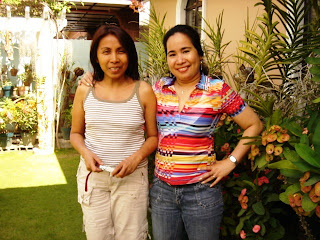 I had the impression that they are small flowers, are they not? Lovely but a little dangerous...ay! di pwede for us because Daniel loves picking on the plants lol.

Yes, they're tiny---each flower is only about 1 inch in diameter, and they have thorns, too. Not advisable as house plants when you have kids...mahirap na.

oh my mother and my aunts went gaga on this euphorbia fever last year!!! they all have different colors and variety of this flower

LOL @ having attended the anthem in the movie theater

Indeed, the vivid, lovely colors of this flower are appealing. So there was really a euphorbia fever! I thought it was just my aunt’s menopausal quirk! :D

Our office in Makati was a block away from Greenbelt and it was a ritual that we would see new movies each week. And because we worked until late in the evening, we would take out food from Wendy’s, go to the movies and eat dinner inside the theater. Most often than not, we’re in for the last full show---so yeah, we sang more Lupang Hinirang in Greenbelt than we did during our school days (hehehe).

Thanks for dropping by, pusa.