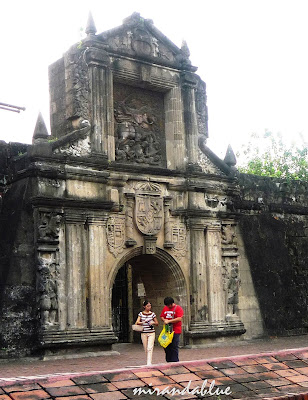 Two weekends ago, I was an accidental tourist in Fort Santiago. It's been more than a decade since I visited the old fortress. I brought an American friend there once upon a time, then a client from UK. Driving from Caloocan on late Sunday afternoon after attending the first birthday party of my niece, together with my mom and my friend S, we stopped by the Manila Cathedral then walked towards Fort Santiago to cool off. It was a hot and humid afternoon. 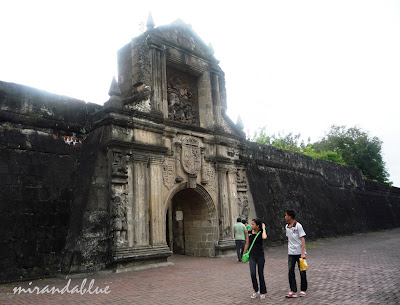 Fort Santiago, or Fuerte de Santiago in Spanish, is a defense fortress built for Spanish conquistador, Miguel Lopez de Legazpi, in 1571. It was named in honor of a Spanish patron saint, James, Slayer of the Moors (Santiago Matamoros), whose wooden relief decorates the main gate of the fort. Fort Santiago is part of the structures of the walled city of Intramuros. One of the oldest and most dramatic colonial buildings in the Philippines, Fort Santiago was built to guard the entrance to the Pasig River. The site where the fort stands was originally the settlement of Rajah Sulayman, a Muslim chieftain and the last ruler of pre-hispanic Manila. The original structure made out of log and earth was destroyed in the Spanish-Chinese War of 1574-1575. It was in 1589 when the Spaniards constructed the fort using hard stone and finished in 1592. It became the main fort for travels and spice trade to the Americas and Europe for 333 years. The famous Manila Galleon trade to Acapulco, Mexico started sailing from the Fuerte de Santiago. 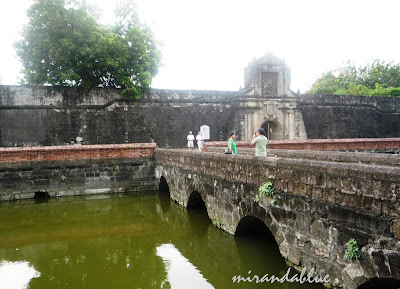 The fort is protected by 22 feet high walls, with a thickness of 8 feet and a gate measuring 40 feet high. The gate of Fort Santiago was built together with the military barracks in 1714. It was destroyed in the Battle of Manila in 1945, and was restored in 1982. 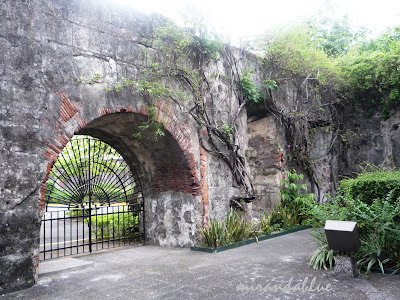 Fort Santiago was used by the Spanish as its base of power, which they wielded unforgivingly. It housed the military, Spanish officials and dignitaries and also served as a formidable prison with infamous dungeons and torture chambers. More recent memories of tyranny include the legacy of wartime Japanese occupation, when Philippine freedom fighters suffered and died here. In another cell block, American POW's were left to be drowned by the rising tide. This fort was one of the rumoured resting places for the legendary wartime trove of Yamashita's Gold and the victims' final resting place has been much disturbed by treasure hunters. 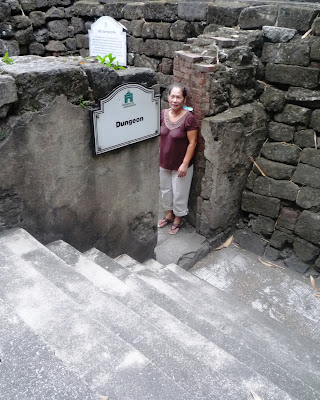 my mom, checking out the dungeon


The prison in Fort Santiago also held in confinement its most famous prisoner---Dr. Jose Rizal, the national hero, until his execution on December 30, 1896. It was during his final days in Fort Santiago when Jose Rizal wrote his death poem, Mi Ultimo Adios. 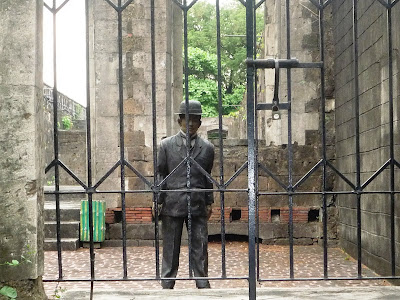 Now embedded onto the ground in bronze, are Rizal's final footsteps from his cell in Fort Santiago to Bagumbayan where he was executed by a firing squad. 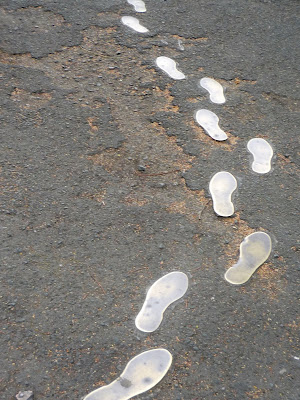 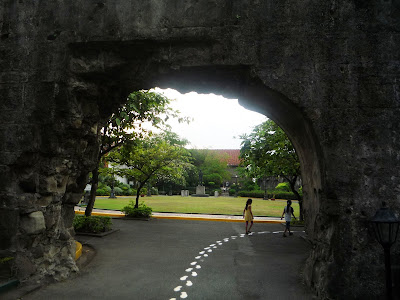 At the heart of Fort Santiago is the Rizal Shrine. The shrine is dedicated to Rizal's lifework and home to various memorabilia, books, manuscripts, artworks belonging to the martyr. It's a pity the shrine was already closed when we got there that Sunday afternoon. I would have loved to see the relics of our national hero---one of his vertebrae, the first draft of his novel Noli Me Tangere (1887) and the original of Mi Ultimo Adios. 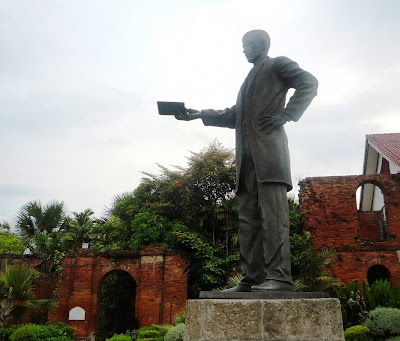 a statue of Rizal at the Plaza de Armas 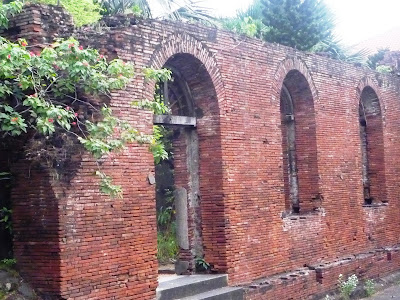 The brick ruins are part of the oldest building in Fort Santiago. Built in 1593, the structure was a barracks for Spanish soldiers. During the American period, army officers and their families lived here. 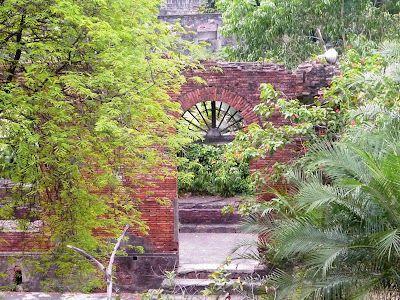 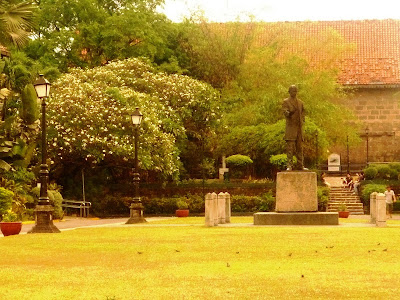 The Fort Santiago I visited that Sunday was a lot better than the Fort Santiago more than 10 years ago. The fort is now well-maintained, the rest rooms and grounds are clean---a national shrine every Filipino can be proud of. Fort Santiago may have lost its old grandeur after World War II but its significance to our culture and history should not be lost on us.

Posted for Weekend Snapshot
Posted by Unknown at 4:46 PM

I'd love to visit that place again with my kids. My WS entry is here.

That's quite a fortress. The builders meant to keep the people inside safe!

Very nostalgic, and beautiful photos. I've been there only once and I did not see these detailed visual tour. And the centuries old architecture is just so fascinating. And I love the footsteps.

This was a fascinating post and you took some wonderful photographs. Thanks for the tour.

Great photos. That place has a rich history behind it. It has been many years since my last visit there.

I felt bad that i wasn't able to bring the kids there during our vacation, hopefully next time.

Great shots! I think you are a great tour guide, too! Wish i can tour that place too..been there once and it was at night! So i only enjoyed the night view and the lights.

Thanks for the trip, I was there last when I was in gradeschool...:D napakahistoric pa din ng dating...

btw, i love your playlist!

Wow! Have not been to Fort Santiago since my school days. It is indeed a good place to bring guests. And yes, nice yung playlist mo. :-)

may i ask po if meron ka list ng mga fromer prisoners sa fort santiago because i was told by my late father that my Lolo Herminigildo Atienza was a former prisoner of fort santiago and his cell bears his name up to now...

hello, Anonymous! i don't have a list of prisoners in fort santiago, and i'm not sure if the national library has documents about the prisoners. but you can check. oh, i remember the wall at Plaza Moriones...i don't remember what those walls are called but there are names of prisoners listed there. Ferdinand Marcos' name was there. visit fort santiago and ask the information center about that wall...i hope you'd find your grandfather's name there.