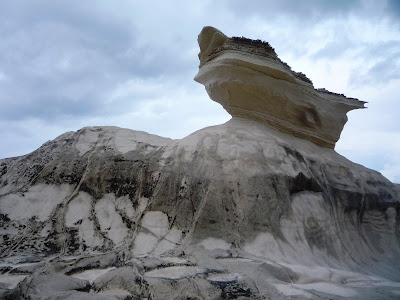 According to my Ilocano friend, "Kapurpurawan" means "white" when loosely translated.  The rock formations here are all natural---formed, washed and shaped by nature.  A hill of white limestone (or sandstone), a sedimentary rock that seems out of place in this blackish rocky coast facing the South China Sea.  The rock surface felt like fine grit sandpaper, and it's not dusty. 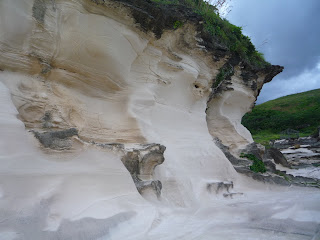 We were the last people who arrived here that late Sunday afternoon.  According to a tricycle driver whom we met along the way, Kapurpurawan is about 3 kilometers from the highway.  But with the very rough terrain, it felt like 10 agonizing kilometers.  I wish we had a 4 x 4!

Afraid that the car would give out, we decided to park on the side of the dirt road and walk the rest of the way.  The place was isolated---no houses in sight, tall grasses and trees on both sides of the road, we were virtually in the middle of nowhere!  We eventually caught up with 2 guys, who like us, looked lost even with the tricycle driver as their guide.  At the end of the dirt road is a tidal marsh and towards the coast is Kapurpurawan. 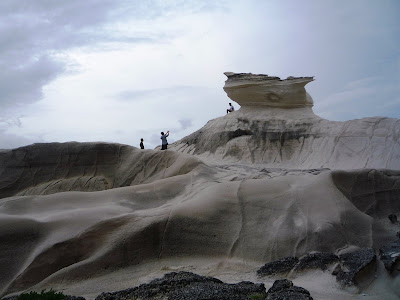 This place is amazing. We expected to see the sunset here but the weather suddenly changed and before we knew it, clouds turned dark and rain started to fall.  Worried to get stranded here in a rain storm without shelter, we ran all the way to the dirt road, across the marsh, and climbed the 18 or so steps to a makeshift hut.  I wish I got a video of the running! We ran like crazy---Sally was so pale and couldn't speak, I thought she was having a heart-attack;  Franzia was screaming like a banshee; I could hear Zhallyn giggling and running like I've never seen before. I was out of breath (from running and laughing at the same time) and felt the jiggling all over!  I am in stitches just thinking about it!

Oh, what an experience.  Definitely the best part of our Ilocos trip. 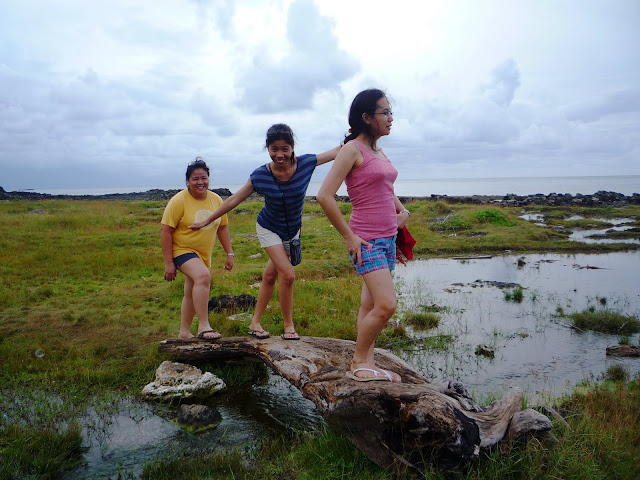 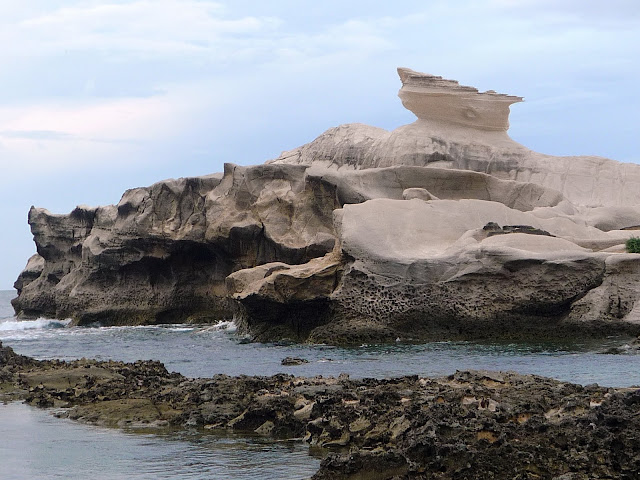 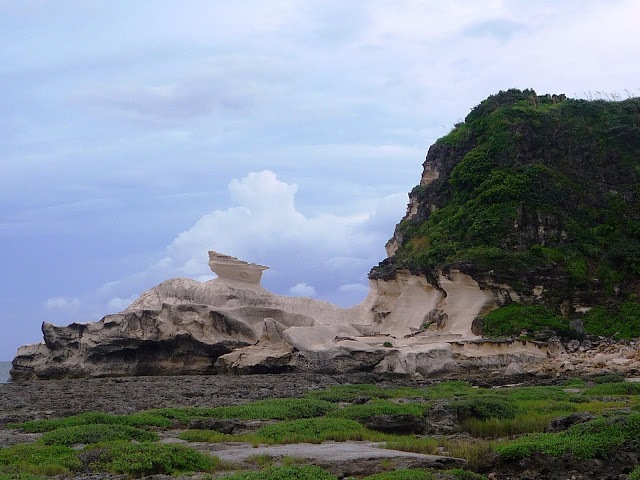 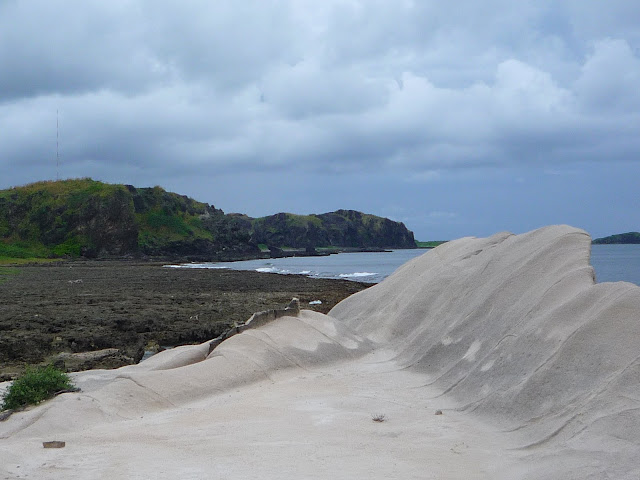 This post is linked to Photo Hunt
Posted by Unknown at 7:38 AM

I liked my sunrise this morning until I saw these pictures. Oh, how I were there with you all. The rock formations for magnificent. I can just see you all hoofing it out of there in flip-flops. It brought back memories of 1999 when Buddy, Ridge - middle son - and I were hiking up on Arenal...an active volcano in Costa Rica. All was quiet and then suddenly the earth began to shake and rumble loudy causing us all to freak out.We, too, started running as fast as we could to get out of there...it was sosososoo scary. I have never run so fast in my life!!! Our family LOVES rock formations so please post more.

I had a good time looking at all your photos, I know you had a lot of fun!

Wow...this is superb! I missed that when I was in Ilocos Norte.
Postcard perfect pictures !

lovely shots of the natural rock formations. great take on the theme.

this place has been hunting me as i view it frequently on blogs i follow. really beautiful one; kailan kaya kami makakapunta ng pamilya ko dyan? ...nice pics, luna. =)

those are wonderful photos! I love the rock formation, reminds me an ark. =)

beautiful from any view. an underrated spot. nobody goes home disappointed after seeing this rock.

Goodness me... honestly hadn't realized that there were parts of the Philippines that looked like that! ;O

Wow that formation is absolutely amazing! It was well, well worth the trip! Have a great weekend

That's an amazing spot, love the naturally carved rock. Your story was fun too, I almost felt like I was there running for shelter from the rain. . .

What a wonderful series of shots. That rock reminds me of a hill near to where I lived in the desert.

It looks like a man made boat to me, How unusual.

what a gorgeous place and the photos are breathtaking.

One word "Wonderful" All those beautiful photos of the natural sandstone.

Itsy Bitsy spider was playing while I was here... you need to come see my take on the theme...

omg...it looks foreign to me. thanks to ur blog. uve introduced a lot of places to visit.

this is simply beautiful! great choice!

What an exceptionally beautiful place. Thank you so much for showing us the natural beauty there. It is a wonderful sight.

Wow, gorgeous! Just goes to show what an amazing artist Mother Nature is. Love your take on the theme!

Wow, I like those rocks. So smoooth! The waves probably smoothened them naturally.

ah..i need to get to this rock formation. I keep seeing it everywhere and I feel like i'm now the only one who haven't been there. Anyway, great shots and really scary, hilarious adventure you had. Happy weekend!

that rock formation is so beautiful. I didn't know we Ilocos have this. thanks for sharing.

What an incredible place. I love what nature does to limestone.

Those rock formations are fantastic!


my natural post is on my plant blog today.

What a beautiful peaceful place. I would like to see this one day. Thanks for sharing.
Su-sieee! Mac
This and That. Here and There. Now, Sometimes Then.

the white rock formations are such a stark contrast to everything around it. Just couldn't help but notice na naka-tsinelas kayo - with all that running involved later, buti walang nadapa.

What an interesting rock formation! Would like to see that in person.

My goodness, Miranda - these are totally mindblowingly amazing photos! I have to go there. I'm serious!!

Is it okay if I post this to my fb page?

I'm still here with my mouth wide open and I've since called Wayne over to look at these marvelous photos.

To quote Wayne "The Philippines would be great!" Thanks one hundred times, as it may one of destinations one of these years!!! Honestly, I have to go there. It likes like I would surely talk to god there. :-)

The form is wonderful art.