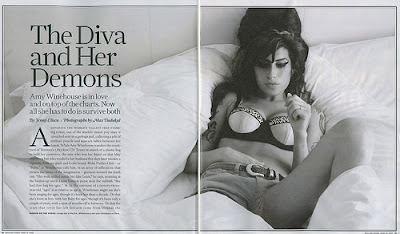 Who wouldn’t have heard of Amy Winehouse by now? She’s all over the news, not only because she won 5 Grammy’s last week, but because of her self-destructive habits, her jailbird hubby who traded her signed photos for heroin in prison. It’s been a while since I watch the MTV Channel that I didn’t know who Amy Winehouse was, until about 3 weeks ago. I heard “Rehab” on the radio, and was captivated. Her voice reminds me of Billie Holiday, one of my favorite jazz/blues singers of all time; and I love the funky, bluesy melody of the song. Downloaded the song from Limewire and it was the first time I learned of the artist’s name---Amy Winehouse. I listened to her other songs, and this is one of my favorite, “Wake up Alone”. Let’s hope that Amy Winehouse would shape up soon and clean up her act, and wouldn’t suffer the same tragic fate as Billie Holiday.
Posted by Unknown at 7:01 PM

I love the neat, new layout! It feels like I'm staring at a museum-worthy piece of really expensive wallpaper.

By the way, I love Amy Winehouse just as much as the next old-fashioned music fan, but someone has got to give love to the most talented songwriter in the planet! By that I mean of course Rufus Wainwright.

hopefully umayos na sya, i think her latest stint in the rehab did her some good

Hi Dagul! Thanks for dropping by and leaving a comment.

Thank you, Migs. I'm glad you like it! My old layout hurt my eyes (hehehe) so I thought I'd try a new one.

I heard about Rufus Wainwright from a cousin who loves his music. I love his version of Lennon's Across the Universe. Will check him out...it's always good to 'discover' great new talents.

I saw one of her not so decent photo earlier this week hehe..wala, no comment(which summarizes it all)..=D