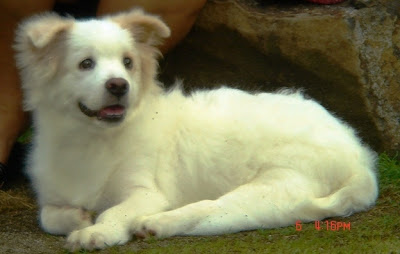 too adorable for words
I never had a dog since I was a teenager. Spinks [named after Leon Spinks who knocked-out Muhammad Ali in '78], our pet Shih Tzu was hit and killed by a car when I was 15. He ran after my brother who crossed the street, didn't notice Spinks was behind him. After a flood of tears and condemning my brother to the depths of hell, I was reluctant of having a pet again. My mother continued to take care of Nadia Comaneci, a dachshund and Spinks' partner, and I kept an emotional distance. I tried cultivating a cactus about a decade ago...but even a cactus could die from drought! Any animal or plant didn't fit into my lifestyle. I thought of buying an aquarium after a friend told me that staring at his aquarium soothes him. Then another friend told me that even fish gets depressed when left alone for days---an aruana commits suicide (ouch! who wants to be blamed for that?), so I abandoned the idea. An officemate brought a bonsai as a housewarming present, but it drooped and shriveled after a few months. A girlfriend who breeds lovebirds as a hobby has been offering me a pair but I was afraid the birds would just drop dead (kamikaze birds?) and I'd be heart-broken. Yes, I have serious issues... which I am trying to overcome! :D 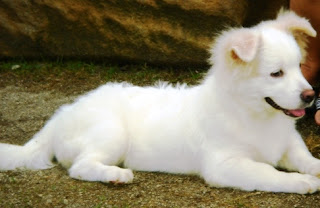 girl-watching
So to hone my nurturing skills, and declare that I'm indeed a responsible adult, I decided to have a real, living, breathing dependent. Here he is--- TaDaaaaa... meet Fritz, a Japanese Spitz, and the love of my life. I took him home when he was about a month old, and he’s almost 8 months old now. Fritz has a congenital defect which makes him a lot more loveable. He has splayed legs so he walks like a penguin but runs like an Olympian! He runs to the door as I open the gate every night when I come home, wags his tail and kisses me all over. Fritz is playful and affectionate...he loves being scratched especially on the belly, and nibbles at my fingers while we’re watching TV. 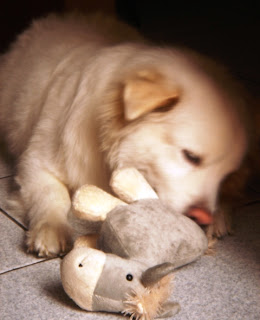 chewing the horse' tail
During the vaccination period, I asked the vet if there’s anything he can do to correct his hind legs and the vet said they’re hopeless. Well, it doesn't matter...he's a well-adjusted and happy dog. And I love him to bits! In early January, Fritz got a scare of his young life. We drove that Sunday afternoon to Bonifacio High Street so he could socialize and run on the grass. I parked and was about to turn off the car engine when there was a loud bang, and smoke coming from under the car. From the passenger seat, Fritz jumped onto my lap, he was trembling. I couldn’t get out from the driver’s seat because he was clinging to me, and making small noises. It took me awhile to calm him down and carried him out of the car. Turned out, my radiator hose burst. :( 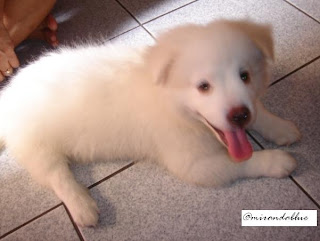 a 3-month old cutie
He peed twice when I put him down, he was trembling. At his favorite playground, he was jittery and didn’t want to leave my side. Other dogs were running around but Fritz was not in his usual sociable mood, instead he inserted himself between two rocks. He was jumpy for the next couple of days. His body would jump at the sound of a door closing, or a distant roar of car engine. When asleep, a leg or parts of his body would tremble---perhaps he was having bad dreams. Then he lost his appetite, and wouldn’t eat unless I feed him by my hand. 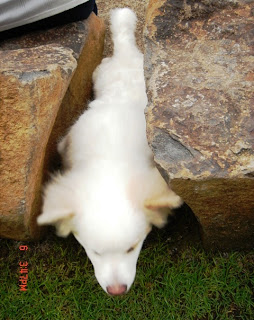 anti-social mood
That really worried me…hell, I even cried about it! Brought him to the vet and was prescribed an antibiotic, vitamins, appetite stimulant, and a water-soluble powder for his drink. When he wouldn’t drink his milk, I would feed it to him through a plastic syringe. The morning after we were at the vet, he was really in a bad shape. He was falling like a drunken master---his knees couldn’t support his body. Maybe it was from hunger because he ate too little the previous night. He really gave me a scare! He wouldn’t eat dog food from the can so I cooked chicken liver adobo for him. When I put food in his plate, he demolished it like there’s no tomorrow. He quickly regained his balance but I called the vet anyway---I was like a hysterical mom! :D 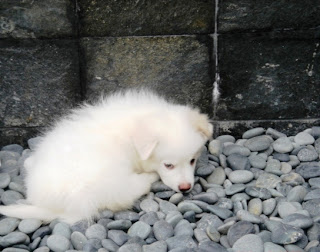 pebbles therapy
Happily, Fritz is back to his old happy self. His appetite has returned and is gaining weight again. He loves snacking on milk cookies, and wrestles the stuffed toy I bought for him. I pamper him with lots of attention, lots of hugs, scratching his belly and head. And every time he wags his tail, I’m the happiest girl in town. 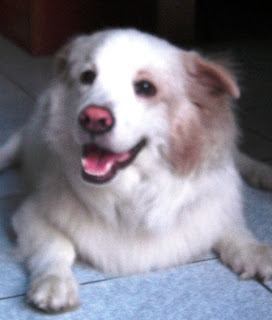 Fritz today
I think we are drawn to dogs because they are the uninhibited creatures we might be if we weren't certain we knew better. They fight for honor at the first challenge, make love with no moral restraint, and they do not for all their marvelous instincts appear to know about death. Being such wonderfully uncomplicated beings, they need us to do their worrying.
~George Bird Evans
Posted by Unknown at 6:00 PM

The average dog is a nicer person than the average person.
-Andy Rooney-

That is a cute dog you have...no wonder you like him.
Great to hear he is back to normal!

I had a cocker spaniel that lied to be 17 years, instead of the expected 14. Loved him like a child instead of a dog ... hehehe. Anyway, as much as the desire would strike now and then, I shy away from the thought of getting another dog. Maybe later on when I'm really old and completely grey :)

He really is a cutie! I like the white balahibo hihi, sobrang linis tingnan. I always have a soft spot for dogs, I would cry whenever mine gets sick or die..=( (like you!) I think I've played more with dogs as a kid than with dolls! lol.

What I like most about them: "Dogs will love you and see you innocent even if you are found guilty..." Something to that effect.

I didnt know about the aruana and we have one here...hope he won't get depressed though lol...Oh just thought: try watching Kimi wa Petto! (You are my pet) hehe. But thats a different story than yours, naisip ko lang, after reading that Fritz would run to the door welcoming you home.

He's white after his bath---give him half a day and he becomes dirty-white.:D Yes, dogs love unconditionally...even when you smell bad and crabby, your dog will love you anyway. He used to run after me when I leave in the morning---he has somehow outgrown the habit. Mukha lang syang kawawa pag paalis ako sa umaga...I'd like to take him to the office! hahahaha

I still watch him closely, Eric. Paranoid nga daw ako when it comes to my doggie.:D Now, I even think of bringing him with me during my vacation!

"Maybe later on when I'm really old and completely grey :)"---you're thinking of a guide dog? hehehe dogs are great company, I talk to Fritz and he looks at me as if he understands! :D

I agree, Sidney...and yes, I'm thankful he's well again. He is cute as well as gentle.

what a cute dog, but i'm afraid of them i know i shouldnt but im scared ;p

you're probably a cat-lover, pusa...dogs are not as independent as cats, but they're as loveable. don't be scared, dogs would sense your fear. have an exciting valentines'!