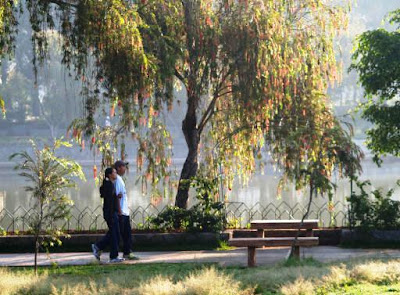 I accidentally met an old flame this morning, at the doctor’s clinic, of all places! It was my follow up check-up with a gastroenterologist, and he was with his wife and daughter to see a pediatrician next door. Waiting to be called in, I sat outside the clinic with the other patients, eyes closed, earphone plugged in my ears, and was surprised when my shoulder was tapped. I haven't seen him in a long, long time. I said hello, and was caught off guard when he kissed my cheek! His wife was staring and it was a bit awkward for a few seconds. After some kumustahan, he introduced me---telling his wife that we used to be neighbors! Kissing neighbors? Hah! Now I’m relegated to being an ex-neighbor, I thought! Funny!
When they entered the clinic, I returned to my music but couldn’t help thinking about our 'past'. More than a decade ago, we were "in love" but things didn’t work. We were both young and the relationship was full of drama (on his part mostly)! Most of our arguments were silly really, now that I think about it. One of the unforgettable dramas was when I walked out of our friend’s party because he was getting drunk and started saying stupid things. When I got home, it started to rain, then my roommates told me that he was at the gate asking for me. I told my roommates that he’s drunk and I wanted him to leave. He didn’t leave…instead he kept on calling my name and it was raining...he was soaked to the skin (di ba parang sine? hahaha)! My roommates were looking out the window feeling sorry for him, while I went to bed. Yes, I was a cold-hearted bitch! :D
I remember he liked being alone, and he was shy with strangers. People would mistake his shyness and reclusiveness for arrogance. I guess it was a convenient label slapped by those who see only the surface of things and nothing more. But alcohol loosened up his tongue---he would talk endlessly and sometimes, cry. It was like he had a split-personality disorder! He was this shy, thoughtful and gentle person when he's “normal” but after a few beers, he became a totally different person---nasty, jealous, offensive and just strange. He and his wife lookeed happy though…maybe she enjoys listening to his rants and could manage his psychotic breaks.
So there I was, sitting outside the doctor’s clinic, with a smug look on my face when he said goodbye. And I thought of my life now…a life of slightly unsettled contentment, all right in general but cut through with an aloneness that I simultaneously treasure and dislike. It’s a blend of contentment and weariness of being happy where I am and yet wishing I am somewhere else. But not with him, that’s for sure! I wish him and his family all the best.
Sometimes you have to get to know someone really well to realize you're really strangers.
~Mary Tyler Moore
Posted by Unknown at 2:54 PM

I never married because there was no need. I have three pets at home which answer the same purpose as a husband. I have a dog which growls every morning, a parrot which swears all afternoon, and a cat that comes home late at night.
-Marie Corelli-

hahahaha that is funny, Sidney! but i see her point.:D I already have a dog---so I should think of getting a parrot and a cat??!!

Inspite of the hurt, you wished your old flame and his family all the best. That is very sweet of you.

You did not lose anything that truly belonged to you and you are all the better for it.

I am sure a man, if he is not already there, will come into your life that truly deserves you, your love and more. I want to wish you good luck but I think you already have it.

Hmm...did your heart felt like its going to run away when you saw him Luna? Hehehehe, just teasing. In the movie 'Meet the Robinsons,' Lewis proposed that our forgotten memories are stored somewhere in the brain and he invented a device that could make a person remember, but I believe the trigger to remembering is (in your case) the person himself! hehe the meeting did made you appreciate more of yourself...

"Sometimes you have to get to know someone really well to realize you're really strangers." - I like this!

I patted myself when I walked away from that guy many years ago, Gzel. But we had some good times, too...and it's nice to remember the laughter shared with someone you used to care about. But no, my heart didn't do a somersault when I saw him again. It skipped a beat, then went back to its regular rhythm (hehehe).

All is forgiven, bertn. Once it’s over, it’s over---brooding over heartache is a self-defeating exercise. But I’m not giving up yet on that man who deserves me---baka na-traffic lang! hahahaha I am an indefatigable, hopeless hopeful. :D

And yes, nothing good gets away.

LOL and i'm sure your have congratulated yourself heartily seeing him today after a long time, that you made the right decision saying good bye =D

its just weird seeing old flames and you get to ask yourself what have i seen in the man!

hehehe something like that, pusa. i try not to remember the bad things na lang...i'd rather remember moments so i can smile and say 'hello' when i meet an old flame.

You must've been really startled when he tapped you on the shoulder, huh? Hehehe.

By the way, love your photographs. Did you get your dream camera, yet?

Let's just say I was surprised to see him at the clinic...but I recovered quickly! :D

Thank you, Eric. Di pa rin (huhuhu)! I still plan to go to Hidalgo. Problem is, I can only go on Saturdays...timing lang kailangan ko (hehehe).