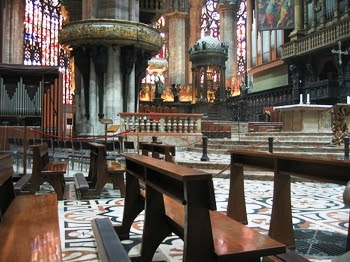 inside the Duomo di Milano
Milan and design. They go together like Dolce and Gabbana. Milan is the center of creativity in Europe, and when an American client invited me to meet them at the Macef International Home Show in Fiera Milano, I was beside myself with excitement. I bought a pocket Italian-English dictionary, practiced ‘grazie’ in front of the mirror, and I was ready to go!
After meeting the clients at Grand Hotel Verdi, Tess, my colleague, and I walked towards the exquisite Galleria Vittorio Emanuele II, a glass-roofed arcade with marble floors that was built in 1867. There are high-end stores, restaurants and cafes inside the galleria. 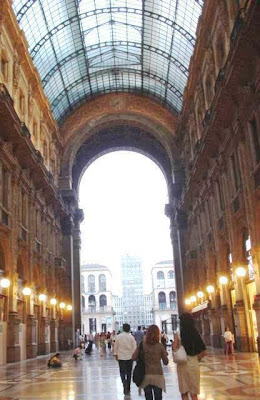 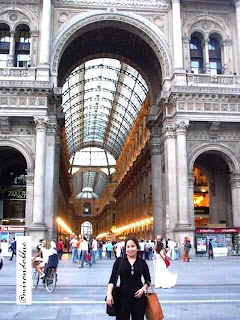 Our destination was the magnificent Duomo di Milano, an elaborate Gothic cathedral on the main square of Milan. Building this vast cathedral started in the 5th century, generations of kings and popes changed the design a couple of times that it took more than 400 years to complete. Breathtaking statues and intricate stained glass adorn the cathedral. 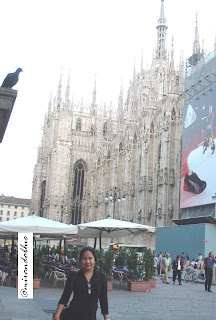 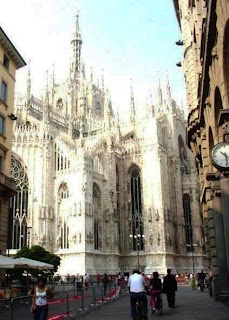 back of the Duomo
Unfortunately, the Duomo was undergoing renovations and cleaning when we visited, scaffolding obscured its glorious façade. 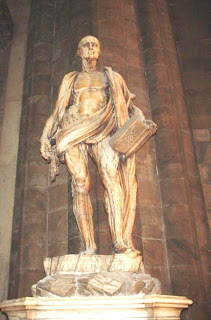 a scary statue inside the cathedral 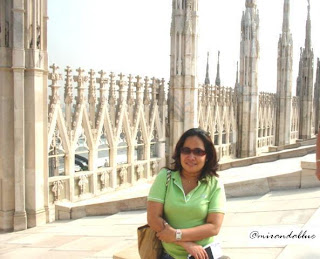 on the roof
We rode an elevator to reach the roof top of the Duomo. There are pinnacles punctuated by a grove of spires, topped with statues overlooking Milan. The intricate marble design was astoundingly mind-boggling. 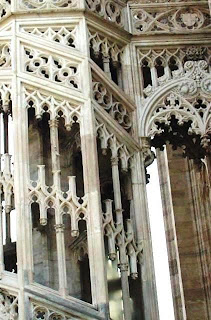 Armed with a map, Tess and I decided to look for Da Vinci’s Last Supper. The famous painting is in the refectory of Santa Maria della Grazie, a church built in the 14th century. Taking photographs was not allowed inside the museum. I noticed this wrought iron floor candelabrum in one of the church’s chambers. 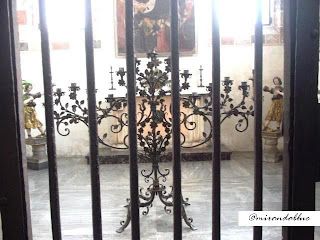 My feet were already blistered by the time we arrived at the Castello Sforzesco, a castle built in the 14th century. The Castello houses several museums---works by Michaelangelo, Mantegna, Bellotto and Canaletto are displayed at The Museum of Ancient Art. 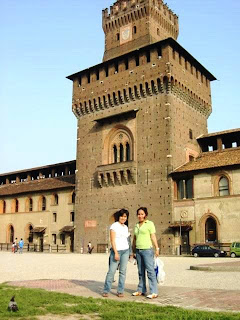 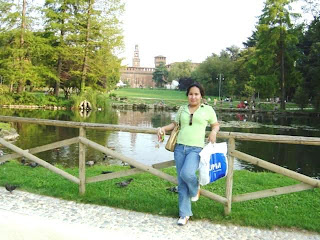 a park behind the Castello
At the far end of Castello Sforzesco is the Arch of Peace constructed in early 18th century. This arch was Napoleon’s idea to celebrate his victory but after his Waterloo, the arch was left unfinished until 1838. 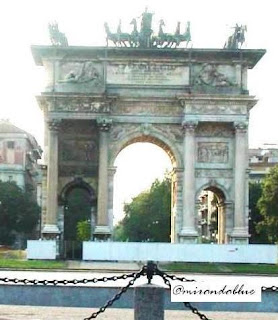 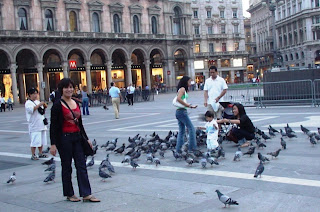 Tess with the doves at the piazza

We met a lot of Pinoys in Milan…waiters, domestics, exchange students, wives of Italians and tourists. Our hotel manager enthused about the Thrilla' in Manila when he learned that we're from the Philippines. For a minute, I had no idea what he was talking about. Then I realized he was talking about the Ali-Frazier boxing match in the 70's at the Araneta Coliseum. I remember my father going gaga over that match. Like Filipinos, Italians, I realized, are crazy about boxing.
We also chanced upon a Ferrari launching at the piazza where Tess was star-struck by F1 driver Michael Schumacher. She panicked and asked me to take his picture---alas, I didn’t know who Michael Schumacher was, didn't recognize him waving in front of me! I was busy admiring the cars and the drop-dead gorgeous Italian men all around. 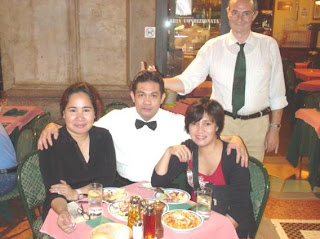 dinner at the Galleria
with our Pinoy waiter and his boss 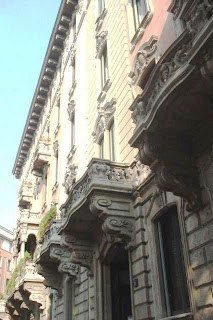 facade of our hotel
It was a short and memorable visit---my first taste of Europe. Shopping was out of the question because it was extremely expensive! After roaming the luxury shopping areas of Via Montenapoleone, Via della Spiga and Via Sant Andrea, and drooling over the windows at Fashion Quadrilatero, we ended up shopping in Benetton’s outlet store! How can a peso-earner shop in an expensive city like Milan???? Sigh.
Tess and I comforted ourselves by drinking espresso at Zucca, and dining al fresco-Milan style.
Posted by Unknown at 3:23 PM

You're right, Sidney. I wished I had the euros for a Milan shopping spree. :D

I love the shot of Arch of Peace. So beautiful. Have a pleasant day Miranda.

Milan is a great city indeed! My memory of our stay there was the astonishingly short time spent at the US consulate to get a replacement passport for my buddy whose passport and other personal stuff where stolen on a night train while we were enroute from Rome to Nice.

It only took us half a day to get him a new passport - bless the US consulate for their efficiency!

I wished I had more time to explore Milan, bertn. But it was business trip, and my boss was nice enough to let me and my colleague stay a few more days longer than we were supposed to.

Wow! Lovely! This is another city I wanted to visit. Ironically, its near Vienna but hubby wants Spain better lol. I like the Galleria Vittio photos! great architecture no?

The doves seem to be a must have photo too! hehe. =)

The architecture is certainly beautiful, Gzel. It's a great place to have coffee, shop, dine, or just watch people. Yeah, a photo-op with the doves is one of the tourist attractions! :D

Spain, I'm sure, is an interesting place to visit, too. In fact, it's one of my dream places to visit before I permanently close my eyes. :D

hi luna..we are planning to go milan on feb6 to feb 9..where can we find affordable hostel or do you know pinoy there na nag papaupa only for 3 nights? I will appreciate your reply..Thank you
donna_mgm@yahoo.com