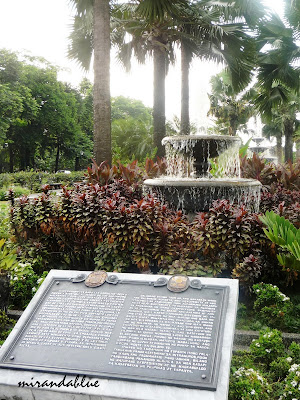 Sounds of water greet the visitor upon entering the gates of Fort Santiago in the walled city of Intramuros. There are two fountains at the center of the plaza known as Plaza Moriones, named after Governor General Domingo Moriones (1877-1880). Plaza Moriones is a public promenade with benches and tree-lined walk ways. Near the fountain is a historical marker established by the Spanish Embassy to commemorate the 1792 political and scientific expedition to the Philippines made by Alejandro Malaspina and Jose Bustamante.
The information center, cafe and souvenir shop are housed at the ten chambers of the stone wall near the gate. An old building, a former soldiers' barracks of the Spanish and Americans, has been slowly disintegrating and no longer open to the public. Cultural performances are also shown here---we caught a drum and bugle corps during our visit. I also noticed picnic tables, and the archeological excavation of Artillera de Maestranza, a foundry during the Spanish regime that cast cannons and ammunition. Flowering kalachuchi (frangipani), old narra and huge anahaw trees provide shade in this part of Fort Santiago. 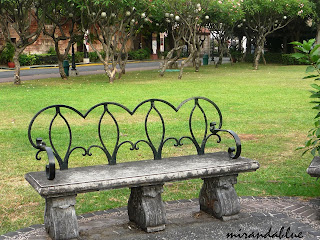 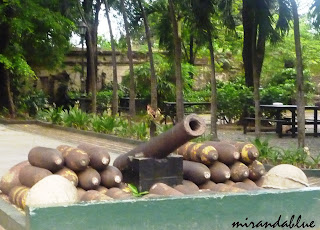 Remnants of the past---a cannon and mortar shells on display, either from World War II or the Spanish period. Fort Santiago, one of the oldest Spanish stone fortresses in the country, is definitely a cool place to visit.


"The whole history of the world is summed up in the fact that, when nations are strong, they are not always just, and when they wish to be just, they are no longer strong." 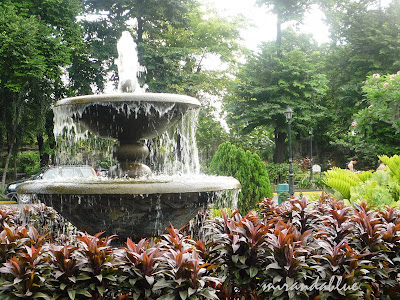 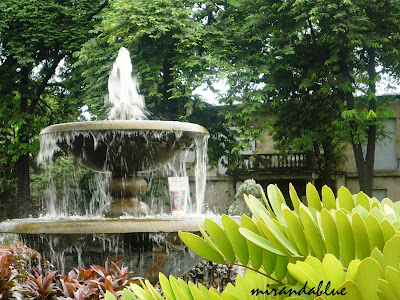 Posted for Watery Wednesday
Posted by Unknown at 12:45 PM

Looks like a perfect venue for a romantic date ! :-)

I really quench my thirst with you pictures which i miss hmmmm nice ones.

That's a stately looking fountain and a well kept garden with a bit of history.

I like historical places. This looks like a great one to visit. Love that fountain. Great shots. :-)

it's one of the best restored place in intramuros. i enjoyed watching the historical video as shown on their small theater.

Great shots and so watery indeed. I love the simplicity of the fountain's design. Never been there before.

Lovely photos. It has been ages since my last visit at Fort Santiago. I would like to take my son there soon.

Fantastic fountains, it is always a treat to see your posts.