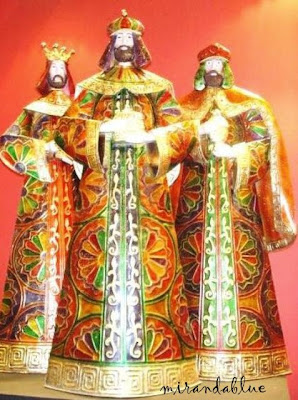 16-inch set of 3 Wisemen from Creative Treasury, crafted from stamped tin and resin

The Three Kings are those who came bearing gifts or gold, frankincense and myrrh for the newborn Jesus in the Biblical stories. They were named Melchor, Gaspar and Balthazar.

For Catholics, the Feast of Three Kings (or Araw ng Tatlong Hari) is the official end of the liturgical Christmas season in the Philippines. It is also known as the Feast of the Epiphany, which commemorates the manifestation of Jesus Christ to the Gentiles as represented by the Magi. It is also known as the Pasko ng Matatanda (Feast of the Elderly), the day that specially honors senior citizens.

The Feast of the Three Kings was traditionally commemorated on January 6th but is now celebrated on the first Sunday of the year. For hundreds of years the Three Kings, not Santa Claus, were the traditional bearers of Christmas presents for children. The children left their polished shoes and fresh socks on the window sill, ready for the gifts from the Three Kings on their way to Bethlehem. (Source: WikiPilipinas)

Posted for Ruby Tuesday
Posted by Unknown at 9:50 PM

Between the music you post and your clear, thoughtful writing...truly...one of my favourite blogs that I follow. Thank you! Happy New Year.

These are lovely!
Growing up I always enjoyed this part of the Christmas story and We Three Kings was a favorite Christmas song.

What festive and mighty Three Holy Kings you have pictured.
I like the fact that their day is rememered from the Philippines to Norway. We share a common treasure.
From Felisol

This post brought me home. =) I remember my late grandmother who never failed to attend the Feast of 3 kings celebration in a neighbor town.

What an interesting post, the Three Kings look so tall and regal, and I love that there's a day to honor senior citizens too.

These are terrific works of art!!

My Ruby Tuesday is posted HERE --scroll down below the Heads or Tails Meme to find it tho!

Happy day to you.

I always like to leave the Christmas tree up until Three Kings Day has passed.

Happy New Year and thanks for the visit!

Lovely 3 Kings and I didn't know there is such a festival.

Oh gush that is beautiful the robe is well design and the colors is awesome. Happy 3 Kings!

Their names are Gaspar, Baltazar and Melchor, right?Happy Three Kings!