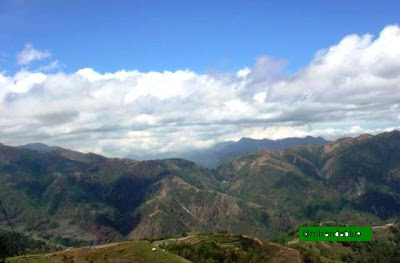 Clouds over the majestic Cordillera Mountains

I took this photo while in a bus, traveling from Sagada to Baguio in March 2005. I don't remember the exact place where this photo was taken, but it was probably in Benguet.

Cordillera is the highest and largest mountain range in the Philippines. Located in the northern central part of Luzon, the Cordillera connects 6 provinces (Benguet, Abra, Kalinga, Apayao, Mountain Province and Ifugao), and the region is home to numerous indigenous tribes collectively called the Igorot.

The world famous 2,000-year old Banaue Rice Terraces, a UNESCO World Heritage Site, is found in Ifugao. Baguio City, the country's summer capital is in Benguet. There are other natural attractions in the region---such as the ancient burial caves in Sagada, Benguet and Moutain Province; with 4 national parks: Cassamata Hills, Mount Pulag (the 2nd highest mountain in the country), Mt. Data and Balbalasang-Balbalan in Kalinga. For extreme sports enthusiasts, there's a world class white-water rafting in the mighty Chico River in Kalinga.

Exploring the Cordillera is not for the fainthearted.
For more Photo-Hunters, visit TN Chick.
Posted by Unknown at 2:38 PM

This is beautiful beyond words... thanks for sharing this magnificent view!

Haven't been to that area yet but we plan to explore the place, when the kids are bigger :)

Looks nice! Thanks for dropping by. Re: my photo. Actually it was taken in Blue Waters Resort. Paradise Garden Resort is too crowded!

I took my photo this week from a moving vehicle as well. It's not nearly as beautiful as yours, though! Nice job. :)

Looks like the clouds are resting on top of the mountains..beautiful!

Wow that is an amazing scene. Have a great weekend

The mountain slopes, the puffy clouds...this looks like a piece of heaven.

My clouds are posted, a bit different in 'take' this week, stop by if you can and see what you think! Have a great weekend.

Nice choice of photo! Have a great weekend!

Great photo! The colors are wonderful! Not to mention that it feels like we're standing there on the mountain with you.

That's a beautiful view. How far you can see... What a mountain range that must be.

What a lovely photo.

Beautiful view without a doubt. The clouds just seem to go on and on.

Wow! We are going all over the world on the Photo Hunt this week. Wonderful choice for our "clouds" theme. What a view.