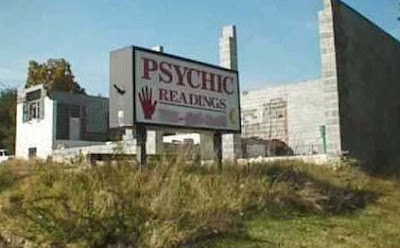 "We're sorry, our building was destroyed due to unforeseen circumstances."

A friend living in California forwarded to me an email about the prophecies of a certain Brazilian psychic Jucelino Nobrega da Luz. This psychic is said to have psychic dreams since he was 9. In the email, Jucelino claimed that he warned the US president in 1989 about the terrorist attacks in 1993 and 9/11. He allegedly sent letters to the Indonesian president in 1997 to warn him of the 8.9 earthquake on December 2004 that killed thousands of people in Aceh.

Jucelino has psychic dreams of disasters happening until 2011. He has predictions of tornado in Brazil, tsunami in Japan, earthquakes in China, Turkey, Sumatra, deadly temperatures in Africa and the Middle East, a cure for cancer, a new incurable disease, and another terrorist attack in the US. One of his predictions is an 8.1 earthquake to hit the Philippines on July 18, 2008---16 days from now.

My cousin living on a 5th floor condo asked me what she’s going to do with her breakable things at home. She was obviously shaken and has internalized the predictions. I told her in jest that instead of worrying about her TV set and DVD player, she can bring a sleeping bag and stay at my place on July 18th. A friend and I are organizing a party for July 18th, and she asked me yesterday after reading the email if we’re pushing through with the party. I said yes, we’re going ahead with the party---but our friends may be surprised if both of us would show up with helmets and flashlights. We could tell our friends that it's our fashion statement, or we move the party to July 17th...Of course, July 19th is out of the question if the prediction would come true! My friend went on to suggest that I forward the email to Phivolcs (or the Philippine Institute of Volcanology & Seismology) in case they haven’t received the email yet. Sure---then Phivolcs would tell me that there’s no scientific basis, therefore, the prediction is crap, and besides, nobody can predict earthquakes, right?

I was grinning like a lunatic as we ended our crazy conversation.

But kidding aside, a lot of people are taking the predictions seriously. Some call Jucelino the new Nostradamus, and Edgar Cayce's reincarnation. Most of my officemates are planning to file a leave of absence on July 18th; some are too scared to even finish reading the email. Since our office is on the 15th floor, and located near a fault line, it would be wise not to be there on July 18th, if you believe in Jucelino’s dreams.

I was a dream groupie in my 20’s, and up to this day, I find dreams fascinating. I believe in the existence of psychic dreams and paranormal phenomena. But I am often called a “non-believer” because I seek rational and natural explanations first before I believe that something is “unexplained”. Dream appreciation and interpretation didn’t begin with Sigmund Freud, the Father of Dream Analysis. For thousands of years, people have been fascinated with dreams and visions and their meanings. Ancient cultures have always given dreams respect because they believed that dreams are spiritual and a way of gaining insight, wisdom, and guidance for everyday life.

The Bible was written by prophets or seers as they were called during that time, and many of God’s messages came to the prophets in a form of dreams and visions. One prominent figure in the Bible is Joseph (popularly known as Joseph the Dreamer), Jacob’s son, who had a God-given talent to interpret dreams. Muhammad who is regarded by Muslims as the messenger and prophet of God, received his first “revelations” from God in the month of Ramadan in the 6th century. There’s also the 16th century French astrologer and healer, Nostradamus who claimed to base his published predictions using judicial astrology. According to Wikipedia, judicial astrology is an art of forecasting future events by calculation of the planetary and stellar bodies and their relationship to the Earth. Edgar Cayce, also known as "The Sleeping Prophet", is a 20th century American psychic who was known for his ability to channel answers to questions while in a self-induced trance. Considered as America’s most documented psychic, Cayce claimed to have predicted World War II in 1935 responding to a channeled question about global affairs. In a reading given in 1927, he predicted blood as a diagnostic tool of the future as well as the La Nina and El Nino phenomena.

It is safe to say that every culture in history has its very own psychic. Some cultures call them soothsayers, diviners, seers, and prophets.

My curiosity was piqued by this Jucelino Nobrega da Luz so I googled him last night. One calls his prophecies “pure esoteric”, another calls him a mad man, a con artist. I read articles in the net about Jucelino’s claim of the $25 million reward offered by the US government for capturing Saddam Hussein. He claims to be a psychic detective and he was able to able to know Saddam’s location through his supernatural mental powers, a technique called “remote viewing”. He allegedly sent letters to the US president detailing the exact location of Saddam in Tikrit. And for that, he says, he deserves the reward money.

My question is, could he use his “remote viewing” ability to locate Osama bin Laden? Or how about a few crates of Yamashita's treasures?

Before you panic and pack all your breakable treasures and heirlooms, buy sacks of rice and sugar, boxes of canned goods, a trunk-load of bottled water, please consider that Jucelino’s predictions are not quantum physics, and so far, none of his predictions have been proven true. My brother suggests that we all read an earthquake preparedness handbook here, just in case (hehe).

So let me whisper to you telepathically, like the royal elf of Middle Earth Galadriel whispering to Frodo of the Shire---"Don't be afraid your life will end; be afraid that it will never begin."

I love your last line in this entry. :D I'm not going to lose any sleep over this guy's predictions. I'm just way too busy living to worry about dying.

i dunno miranda. i have nothing against psychics but i am not just a fan of them. maybe because of your photo above, how come they did not predict it lols.

I am open-minded about the psychic phenomenon, lawstude, but so far I haven't been personally convinced.:D And despite the lack of proof, there are no shortage of believers. Sabi nga sa X-Files, "The truth is out there..." Haha

Thanks for droppin' by.

We can't avoid danger 100% of the time, and indeed there is much in the world to make us afraid. But living half-paralyzed with fear is not living at all. There is time to listen to our fears, and there is a time to turn a deaf ear when fear knocks on our hearts. Thanks for visiting, Panaderos.

this july 18, 2008 thing is so creepy. it smacks so much of a twilight zone episode.

hey luna... great meeting you last saturday! cheers! ... and nutart too. funny, i've never thought that nutart was someone i knew from a very distant past. ;-)

It was great meeting you too, Daniel. Small world talaga e.:)

Hi Luna! I'm back in the island and had to tag along a favorite cousin who's visiting from Arizona.

We had a lot of discussion about our spiritual journeys and we're actually believers of the saying of Frodo of the Shire's quote at the end of your post.

Nice post! My hubby and I believe that we all have an intuitive feel where to be at a specific point in time kaya nothing is by accident. If by chance all our breakables break then it is time to buy new ones, di ba? ;-D

I truly enjoyed our meeting (also with Palma Tayona! It was fun although still brief for my sense of camaraderie. Thank God, natuloy rin!

Welcome back, Bernadette! Yeah, our meeting was indeed too short. But your island is not that far...who knows, my itchy feet might lead me there one of these days.:D