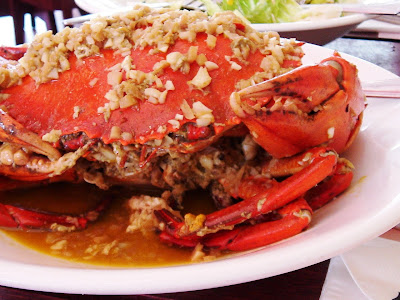 Much of my day is spent managing my food cravings. Holding them at bay, really. The things I desire right now are inevitably fats (bacon, sisig, and crab with aligue), sweets (chocolates, cheesecake) or carbs (pasta)---or a combination of all three (baked potato with cheese and bacon bits). It takes up a lot of brain space, thinking about what I should and shouldn’t eat, and it’s not so rewarding, since in the end I usually give in to my urges.

When I looked up the meaning of craving, I came upon words I’d expect to find in a romance novel: consuming desire, longing, urgent need. Food cravings embody all those overheated descriptions, notoriously defying good sense. I respect my mysterious cravings for cheese, chocolate, fried and creamy foods and indulge them as often as possible without compromising my well-being. 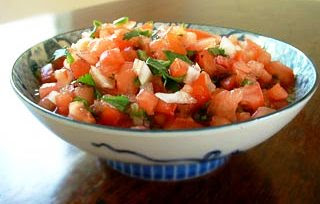 my favorite Mexican salsa
Thank goodness that there are now new ways to cook that figure out how to indulge cravings without guilt. I gravitate toward tomato-based pasta not only because it safely satisfies my longings for carbs, but also because tomatoes contain large amounts of vitamins C, A, potassium and iron. It’s also an antioxidant that lowers the risks of certain cancers. I’m also addicted to salsa…no, not the lively, ballroom Latin American dance. It’s also of Latin American origin, made from fresh tomatoes, onions, peppers and cilantro (plus olive oil, lime juice, salt and pepper). It’s a standard accompaniment to tortillas and tacos, even with fried fish and steak. 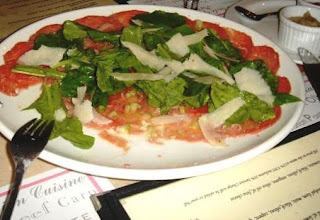 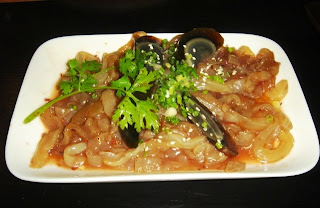 I also have cravings for mushrooms---not the mind-altering specie that gives a trip of visual hallucinations, causes a lot of laughter, and an intense trip to never-never-land. I crave for mushrooms my grandmother used to gather at the banana grove after a stormy night. My grandmother said that mushrooms grow where lightning had hit the ground. For a long time, I believed that indeed mushrooms are food from aliens brought to earth by lightning, like manna from heaven (ha-ha). Aside from that, mushrooms are also rich in protein, fiber, vitamins B and C as well as calcium. Researchers believe that maitake, shiitake and reishi have phenomenal healing potential. These mushrooms have shown to lower the risk of cancer, ward off viruses, reduce infection, combat allergies, boost heart health, and help balance blood sugar levels. I love grilled fresh mushrooms like my grandmother’s---toss with a little oil, a pinch of salt then wrap mushrooms in banana leaf and place it over the grill. Dried and fresh mushrooms are also great ingredient in pasta dishes, sotanghon (vermicelli) guisado, mixed veggies, beef and oyster sauce, or just sautéed in butter. 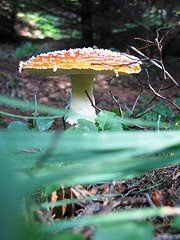 “Death by Chocolate” would probably the headline in the tabloids after I was found dead from consuming too much of this dark concoction. Chocolate is one of my comfort foods. And who can blame me? Chocolate has captured the taste of people throughout the ages. The Aztecs and Maya associated chocolate with the goddess of fertility and had been drinking chocolate since 400 AD. Aside from being reputed as an aphrodisiac, dark chocolates are believed to have anticancer benefits. A study reported by the BBC indicated that melting chocolate in one’s mouth produced an increase in brain activity and heart rate that was more intense than that associated with passionate kissing, and also lasted four times as long after the activity had ended. But as we all know, too much of a good thing can do you harm. Every now and then, I still indulge in dark chocolates but with almonds---because almonds are lower in calories, high in vitamin E, protein and fiber, and they can also protect the heart. Dieticians recommend eliminating something bad in our diet and replacing it with almonds. 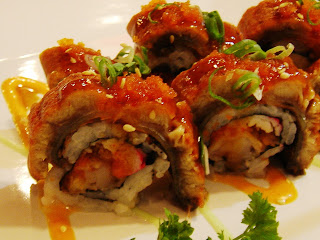 my favorite maki called Jurassic at Rai Rai Ken
My biggest struggle is usually in the morning, when crisp bacon and pancakes call to me. I was recently surprised to learn that some people, like my brother, Brian, actually crave healthy things, like laswa, an Ilonggo concoction of ampalaya, saluyot, alogbati, okra, malunggay, and the rest of the veggies in “Bahay-kubo”, boiled with shrimps or dried fish and shrimp paste. I absolutely hated laswa when I was a kid, the texture of vegetable leaves made me choke, and it usually resulted with my mother’s slipper hitting my behind. Eating laswa was like torture…the slimy broth reminds me of saliva, bribes, threats and lectures couldn’t convince me how nutritious laswa is. And this is one of my biggest regret…that I never learned to eat vegetables. 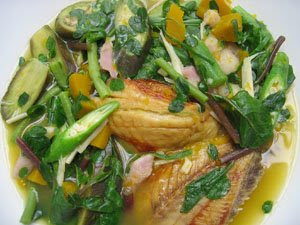 Of course, one way to surrender to cravings and still feel virtuous is to exercise---the “I ate French fries, therefore I will not use the elevator today” approach. Problem is I simply hate to exercise. Honestly, I am perplexed at people who make time to exercise every day. I’ve read all the benefits of exercise, and I do try…I go to the gym even when my “flesh” is weak and my “spirit” struggles and drags its feet. I have pep-talks with myself before playing badminton because visions of a couch and a good book beckon. Hayyy naku...Next time I have a food craving, I’d probably try a “Fear Factor Diet”! Ha-Ha

Luna, tanghalian dito at nagugutom ako sa lahat ng food photos na yan! (I know that excuse of using the elevator...mind you I got straight home from the gym waaaaaah!) kainggit!

Balik ako later to comment on PH, I missed joining that. Have a nice evening!

hi, luna! nice blog you got here. you know what, of all the food pics here, the infamous laswa is the one that i like best! healthy na, not that costly pa to prepare. :-)

i was into exercising before. it's been 3 months since. i dunno, i suddenly stopped and cant find the interest anymore.

It's really difficult to resist temptation---lalo na kung favorite mo! Thanks for droppin' by.

thanks for visiting, bingskee. if you have your own vegetable garden, then laswa is not costly. but if you're buying all the veggies, mahal din s'ya! but the health benefits are worth it naman.

i also find it hard to be consistent with exercise. i usually lose my momentum when i travel or after missing a few sessions because of work load--mahirap makabalik.:( kaya di ka nag-iisa!

I do like that garlic crab, I think I will try and cook that. Mouth-watering post naman, ke Lunes Lunes eh :P.

bakit pangalan "laswa"? Hindi ba may tagalog word "malaswa"? Did it come from there?

Thank you, photo cache. Nagugutom din nga ako looking at the crab.:D show us the photo of your crab ha?

I don't know much about gardening. I bought potted basil and oregano...so far, oregano na lang buhay. You can actually have your own herb garden there, and grow your own organic veggies kasi malawak ang lupa mo. Ako sa paso lang talaga pwede.:D

I also love seafoods, dong. Did you try steamed hammershell in Bantayan? They're so good...and I couldn't find them in Seaside or Dampa. My friends say I'm on a see-food diet...because I eat whenever I see food.:D

there's this generalization that children do not like vegetables, maybe they didn't see me because when i was a child i prefer ginisang sitao over porkchop, and feast on steamed okra (with bagoong). good thing that up to now, my attitude towards veggies did not changed, and that's good kasi sila na lang yung mura ngayon!

no, not all children hate veggie. i have a nephew who, like you, loves veggies. at 6, he likes camote tops salad--and when you ask him what's his ulam, he'd say, damo po.:D i wish my mother tied me to chair when i was a kid and made me eat veggies!

It was a bad idea for me to come to your site after having a light dinner last night and skipping breakfast this morning. I am now starving and even though I'm not a veggie eater, I'll be willing to eat anything you wrote about. :)

I didn't feel like eating tonight after I came home, but when I saw the photos of the food you posted, my appetite was aroused. Wala akong pagkain ngayon kung hindi recycled corned beef, "reconfigured" roast beef with veggie and reheated fried trout; probably OK, but I had the original for the last two meals and I am ready to see my shrink LOL. I'll go for sardinas fresh from the can dashed with toyo and calamansi juice or freshly fried tuyo with vinegar,garlic and sili for a dip.

hahahaha are you on diet, Mr. Panaderos? I stop dieting when I start to drool over photos of food, or when I envy friends who are eating veggies. Kain lang ng kain...life is short! :D

thanks for your appetizing comment!:D

hi luna!
i just had lunch but all your food photos look really scrumptious! na-intiga ako sa jurassic maki fave mo! looks like it will be a fave too if i can just have one tiny little bite...please? hey, sali ka sa lasang pinoy, sundays!and i'm adding you in my blogroll, ok?

hello, ces! thank you for adding me to your blogroll. sige, sali ako jan!:D when you're into light meals, jurassic maki is filling but not heavy...toppings are all seafoods. sure , take a bite.:D

thanks for droppin' by. will return to your site later.

hehe thanks for visiting, lawstude.