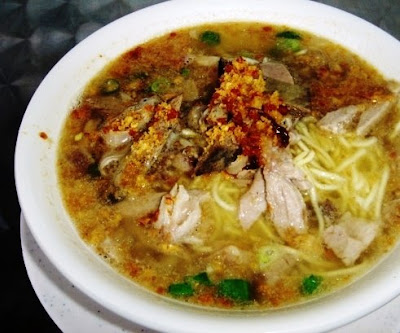 Ted's La Paz Batchoy at SM-Bacolod
A hot, steaming bowl of soup is comforting on rainy days like what we've been having for the past few weeks. Like the traditional chicken soup that has been regarded as a cold remedy for centuries, the Ilonggos’ La Paz Batchoy has been giving more than comfort to Filipinos. Friends go to the local batchoyan to eat and bond, families get together after an afternoon siesta to share this filling noodle soup. Although we enjoy this noodle soup in the summer as well, the craving for something hot during rainy days always leads me to good old Batchoy.

There has been scientific evidence that hot liquids in general can be soothing, if only because they require you to slow down and sip patiently in order to consume them without spilling and scalding yourself. I believe Batchoy has healing powers, not only for the body, but also for the soul…because a bowl of what you fancy does you good.:D

Batchoy or Ba-chui, meaning “pieces of meat”, is a noodle soup, possibly concocted by Chinese immigrants and made famous in a town called La Paz, in Iloilo province. Miki or round noodles is used, mixed with stir-fried pork innards, shrimps, chicken breast or beef loin, beef and shrimp broth, topped with crushed pork cracklings, and garnished with fresh leeks and fried garlic. My mother has a secret ingredient but she's not telling!
This is my first entry to Lasang Pinoy, Sundays. Thank you, Ces, for inviting me.

Mayroon kayang local batchoyan dito sa LA/Oange counties? Anybody?
I know there's a Mami King but they serve mami not batchoy. There's the Vietnamese pho. It's good but it is a pho.

Your photo of Ted's bachoy looked so comfortingly delicious, I'm starting to dream about it.

This is weird. I used to dream of beautiful girls but now I dream of delicious food! Is something wrong with me or am I just getting too old LOL.

When I translated soup for the soul, it wasn't quite as catchy.

But I do agree with its healing powers.

just like bertn i would like to ask if we have it here in the east naman, but i doubt it...i can almost smell the garlicky batchoy! even drooling over my cup of coffee here!

La Paz batchoy is very delicious especially if you put a lot of roasted garlic. I tasted this when we went for a vacation in Iloilo last year. That soup was the highlight of our trip.

I haven't had Batchoy in a very loooong while. I ought to have one the next time I'm in Manila. :)

Eating batchoy in Ilo-ilo is a must like buying dried mangoes in Cebu. Once we were treated to home-made batchoy---ang saraap! The cook was a Home economics teacher and she says the bones of pork should be kept boiling for 8 hours (!) to reach that tasty flavor. As to the spices, she wouldn't tell me :-). At that time, I was thinking of LPG as her shource of cooking kaya I was shocked. But with uling-cooking, it is possible.

Do you know of the spices involved, Luna? Thanks!

My mother boils 'bulalo' for the broth. And yes, 'bulalo' is boiled for hours to extract the marrow from the bone. It's the marrow that makes the broth tastier, shrimps also add to the flavor. We used uling to boil 'bulalo'... according to my mom, it tastes better than cooked in LPG.:D I don't know any secret spices, except for the usual fried garlic and leeks. Oh, probably while bulalo is being boiled, onions are added and 'ginamos' (shrimp paste) instead of salt.

This is a dangerous concoction for people who have arthritis and high uric acid level.:D

Thanks for visiting, Bernadette.

Ted's Old Timer La Paz Batchoy has now a branch at SM-Mall of Asia, and I think another one at the Festival Mall in Alabang. Pareho pala tayo, nauutal din ako when I see foods that I love! Hahaha

Leapsphotoalbum,
My friend in Iloilo used to say that you tend to forget your name after you have tasted their La Paz Batchoy. I hope you didn't forget yours.:D

Sabaw ng kaluluwa...honga, pang Halloween!:D When i was a kid, i was served batchoy by my lola whenever i was sick or had no appetite, with Royal True Orange and saltines on the side.:D Thanks for visiting, Em Dy.

bertn, i guess it's normal as we get older, to think of food instead of our usual fantasies.:D sa dami ng bawal kainin pag old na tayo, food becomes an equivalent of pornography. :D

ey! i just ate at teds last week. i still love their batchoy. jollibee though tried to release their own la paz batchoy.

OMG! I love La Paz Batchoy! My college girlfriend introduced it to me and now I'm missing it so much! Yum talaga yan!