Misua Co for the soul 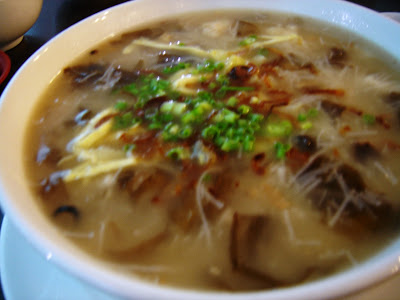 Misua Co
Misua soup was the very first edible food I cooked when I was about 11 years old. The ingredients were "gathered" from my grandmother’s sari-sari store and cooked at the backyard using my cooking set made of clay. I remember how my playmates and I got so excited while I sautéed the garlic and onions, and while the soup was simmering, we almost burned down our makeshift tent. I ended up with burned bangs and one girlfriend with a nasty burn on her arm. Misua is my favorite cold weather soup...it’s a no-fuss soup, fast and easy to prepare and cheap, too. And I’m still being teased at home that my specialty is Misua Soup with sardines, usually with a side comment that the fire station should be alerted when I’m cooking misua.:D

Admittedly, one misua that is better than mine is Mann Hann’s Misua Co---the best-tasting misua I’ve ever had. I can live on Misua Co---no kidding! It’s light, simple and tasty and doesn’t hurt the wallet (P145/bowl for 2 persons). Misua Co has ground pork, mushrooms and some leaf I don’t recognize (I’ll ask the next time I’m in Mann Hann). The Mann Hann I frequent are: 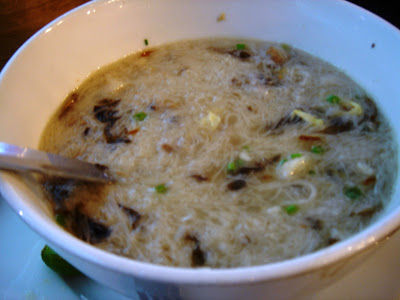 If you're interested in my "girl scout" version of Misua, here it is:

tip from my mother: to extract the flavor, make sure tomatoes are thoroughly cooked

my tip: you can mix it gently or mash sardines if it's one of those days :D

add water and bring to boil

my tip: misua absorbs water so its better to add a bit more water; i tend to add too much water that you can drown in my soup :D

option: a raw, beated egg can be added

I love misua soup!! I only eat patola or upo if it is in misua soup! Gotta cook one now! :-)

anything noodles... misua is one of my fave with shredded tinapa as a one of the garnishings, hmmm...

Hi, Pete! Yes, it's my specialty..misua with tinapa. I can cook it even when half-asleep.:D Thanks for visiting.

Ask your friends and relatives to send you packs of misua, Roselle.:D Or the next time you're back in 'Pinas, make sure you try misua co.

Hmmm.... pretty interesting. I haven't tried misua with sardines. Pardon my ignorance but do you mix the sardines in with the misua or do you have the sardines as a side dish?

Nice little story about your first misua cooking experience. How far is the fire station from your place anyway? Hehe :D Just kidding.

hi, panaderos! my girl scout version is, sardines (in tomatoe sauce) sauteed with garlic and onions. so the soup has a sardine-tomato flavor.:D

the nearest fire station is about 10 minutes away---that's without traffic.:D but not to worry, i have a fire extinguisher ready (haha).

as for the recipe, i'll add it on my post na lang.:D

to answer your question, Luna!
Mu husband Tolerates my misua :-D! I eat it all by myself...I cook him something else. Sometimes, because of my sarap-na-sarap eating, he eats it in the long run ;-).

perfect for the rainy days miranda.

it is raining now so i'll definitely try this but i'll call my misua soup a boy scout's soup 'coz it has lots of hibi.

now, we have a boy scout's version!:D enjoy your hot misua, lawstude!

to tell you the truth, Bernadette, ako lang ang mahilig sa misua sa amin.:D my family don't recognize it as "food". tell your husband that misua is for the lazybones...easy to cook, easy to eat...you don't even have to chew! Hahaha

Hehe... I love misua! Although I personally prefer misua guisado. Quite coincidentally, I blogged about it just a few days ago hehe... nothing as fancy as that delicious looking misua co you posted! :)

hi, philos. i didn't know there's misua guisado! i hope you'd post a photo of misua guisado (and a recipe, i hope).:) thanks for visiting.