Babe in the woods

I'm an avid fan of a TV series Law & Order- Special Victims Unit. Special Victims Unit is a unit of NYPD that deals with sexually-related crimes such as rape and murder, kidnapping, pedophilia, among others. Here, we have the Women's Desk at every police station that investigates crimes against women and children. There's also the DSWD and a number of NGO's who help women and children who are victims of abuses. But sometimes, I wonder if the government and all of us, ordinary citizens, are doing enough to help victims of child abuse. Shouldn't we work on the prevention rather than after the crime has been committed?
A few months ago, a local TV network showed a story of 2 sisters who were sexually abused by their own father. The eldest sister was raped when she was 12 and it went on for 5 years. At times when the eldest daughter refused the father's advances, he would punish the younger brother by tying him up and giving him electric shocks. How sick is that???? Then the younger sister was also sexually assaulted by their father. It was only when the older sister sought the help of their aunt that the animal was arrested. The mother, a laundrywoman, was allegedly clueless to the abuses on her children. I couldn't help but get angry at the mother for her failure to protect her son from physical abuse and her daughters from her pervert-husband. But most of all, I was enraged at the father who instead of being a protector, was the predator who preyed on his young children. 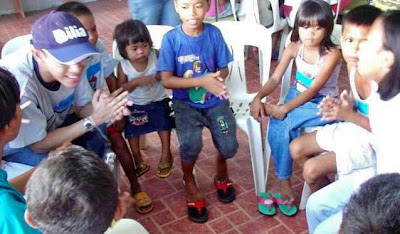 my friend Rey with Gawad Kalinga kids
I’m not advocating death penalty because the Philippine justice system is so imperfect. But with criminals like fathers who rape their own children, pedophiles who brutalize children, adults who kidnap children and use them as pawns for their illegal activities, bullies who enjoy degrading children, I wish I’m Jane Bond---licensed to kill!

Aside from sexual abuse, there are a number of hazards that face Filipino children today. Physical, emotional and psychological abuses, emotional and physical neglect, with more than a million children are estimated to live in the streets, begging for food and often engaging in criminal activity. More than 3 million children work under grueling conditions, in spite of legislation outlawing child labor. Children are also at the crossfire of armed conflicts in some parts of the country.

Last week, the story of a 7-year old girl from Cavite was all over the news. She was rushed to the hospital after her own grandmother had beaten her. The cruelty had been going on for months, according to the girl’s 10-year old sister. Her hands and knees were swollen from being hammered by the grandmother [with a hammer]; her leg was burned by a hot flat iron, her body was full of welts. The girl is a daughter of an OFW and was entrusted to the grandmother when the mother left to work abroad. But instead of taking care of her, the grandmother from hell vented her problems on the helpless girl. I hope the evil woman rots in prison! 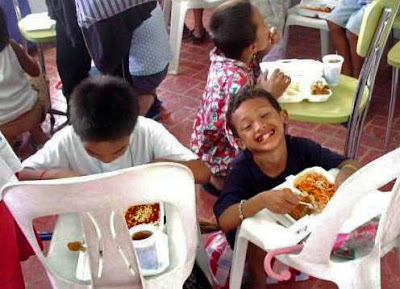 Sagip kids at Gawad Kalinga
I find it hard to understand why there are people who abuse children. Studies say its poverty, drug addiction, and other socio-economic conditions. This problem is not confined to a third world country like the Philippines---even rich countries have abused children. Reality is, there are really sick people out there, like the Austrian man who held his daughter captive in his own cellar for 24 years and had children with her.

There are parents who confuse discipline and child abuse. Sometimes physical punishment can go too far, and crosses the line from being ‘reasonable’ and ‘moderate’ and causes a child’s body to be injured (from mild bruising to death). Corporal punishment is permissible in our culture that sometimes we forget that children get humiliated, too. I was once a child, so I know that striking a child in anger humiliates and frightens him/her and it never solves underlying problems. When we remind ourselves that it is against the law to hit or hurt an adult---why can it be okay to do the same to a child who is smaller and vulnerable? It helps to put ourselves in the child’s shoes, and think about what it would feel like. When you’re about to strike your kid, ask yourself:

- Would I like someone to do this to me?
- Will this really make a difference to the kid’s behavior?
- Am I letting go of my own frustrations on my child?

I hope parents [and educators] realize that there are more effective parenting and disciplinary strategies beside corporal punishment. Let's all make a conscious effort to uplift the situation of children, and please don’t look the other way when you see an abused child---report the abuser to authorities. Let’s give them the love, nurture, and respect that they deserve...after all, children didn't ask to be born.
Posted by Unknown at 2:00 AM

i agree with you here. we cannot just judge them we really need to help them or at least inform the ones responsible.

my lawyer-friend has been discussing this sad plight of that abused girl and the crimes committed by her very own grandmother. shocking? well, not really 'coZ a good number of really dusgusting crimes were committed by a person against his own relative.

i just feel sorry because no kid should be treated unhumanly.

Oh I too have a lot of stories that would infuriate you, Luna! One such is a young girl we are helping go through computer secretarial at the AMA. Her father got all his daughters (except her daw) to be his bedmates. This continued until even up to the daughter of his daughter!!

Karma has it that he fell off a tall coconut tree and died. Was discovered a day after he was considered missing. He was still grieved over because he still looked over his children's needs---however, he deemed he should do.

All we can do is listen to these children's stories so they can find refuge somehow---even just from a listening ear.

Maybe the mother who was unable to protect her son from physical abuse and her daughters from her pervert husband is a victim herself. The husband is a horribly sick man that need to be incarcerated for life!

I've always believed that the last thing we would want to mess up is a child's mind. For a better future in our world, we should take upon ourselves the responsibility to properly care and educate kids so that they grow up to be responsible, productive, and tolerant people.

Why? I'd qoute part of 2nd Timothy 3:3 "without love, unforgiving, slanderous, without self-control, brutal, not lovers of the good..." =( It is not only the environment but a spiritual thing...

If you remember there was 42 yeard old woman in Amstetten locked by his dad and bore about 6 kids, 3 of which remained in the cellar never seeing the sun...sick and horrible as in...

that's right, dong. victims of child abuse need all the help they can get.

hi lawstude! even when we hear stories of human cruelty everyday, it still shocks me. i'm not looking forward to the day when people are not shocked anymore...that would mean we've become totally indifferent and jaded.

My experience with child molesters and those who physically abused children (at times other adults), are they themselves were abused.

This is not to justify their actions though. Good post and an excellent topic.

I did not know Gawad Kalinga looks after abused kids. Good on them. Very excellent organisation doing excellent community building and work.

True, Bernadette. Victims of abuse really need a sympathetic and understanding ear talaga. Whoaa! All his daughters and apo! Grabe! Your scholar is one lucky girl. Thank God, the SOB is finally dead!

Probably, bertn. Mothers of abused kids are usually victims of physical, psychological, emotional abuses...they're too scared to stop their husbands. Then one day, we'd just read in the tabloids how a mother chopped-off her husband's genitals.:D Buti nga!

Yes, I agree, Gizelle. But there's no denying that sex crimes and abuses are also being committed by priests and other religious persons. So it's probably more of a psychological problem.

Very true, Panaderos. We always say that---the children are the future. But still, they're usually the last priority of the government. It all starts when a woman gets pregnant by accident, then they keep on having children with no means of supporting them. Dad is jobless,bored and drunk most of the time, notices his 12-year old daughter; Mom becomes losyang, busy making ends meet, she's out of the house most of the time. Or she leaves the country to work aboard, leaving her kids with her good-for-nothing husband and her daughter gets raped. Hayyy naku!

hi filmasons. those kids from Gawad Kalinga were not abused. i don't know why GW call them Sagip. my friends & i spent a day with them to eat together and play.