Videoke: the new opium of the masses 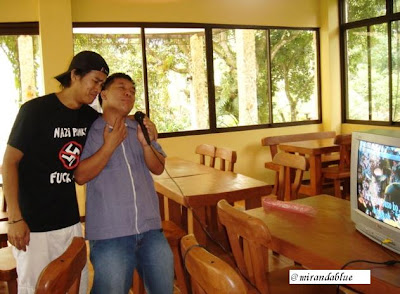 finalists of All-Star K One Million Videoke Challenge
On Sunday afternoons, my nap is usually interrupted by my neighbor singing Green, Green Grass of Home, or Bon Jovi’s Bed of Roses in his Magic Sing. For somebody who loves music, I suffer a great deal when my neighbor is in the mood for a concert because he always “murders” the lyrics of the songs, and I’ve been gritting my teeth listening to his version of Skyline Pigeon. It sounds like this---

Torn me lost from your hens
Let me plyyyyy to distant lands
Ober green pelds, trees and mountayns
Plowrs and poorest pawnteens
Home along the lanes of the skyweeee…
OK, he’s having a great time, and nobody in her/his right mind has the right to stop him because the guy is having fun. But enduring three solid hours of Michael Learns to Rock, I found out, is a form of torture worse than sensory deprivation or submersion in ice water. I’ve grown to hate Michael Learns to Rock with nuclear capacity (sorry, MLTR fans)…their songs are as tasteless as oatmeal, and soooo boring---drives me to pull my hair! Sometimes, it becomes physically painful to listen to my neighbor and I feel this tooth-edge pain on my 2 front teeth. When I feel that, it's a sign that I need to be somewhere else, or I'd lock myself in the bathroom.

Well, I had my revenge last Sunday. My cousins arrived for merienda, and they requested that we celebrate Mother’s Day with a videoke party! Yeheyyyy! Images of Celine Dion and Lani Misalucha rushed to my head. I dug up the vcd’s and microphone, turned the volume up, and we’re ready! My cousin Pinky started with Get Here, followed by the walang-kamatayang Dancing Queen.

Filipinos share a passion for music although naturally we have different tastes. No party in these islands is complete without a videoke. Beer tastes better when you’re holding a mic and belting out Mariah's Ken Leeee (I'm sure you saw the video in You Tube)! You forget the cholesterol in sisig and crispy pata that you’ve been munching for over an hour; forget the unpaid, overdue credit card bill when you’re crooning your favorite Beautiful Girl. You sing Livin’ on a Prayer like there’s no tomorrow, forget for a moment the rice crisis, the skyrocketing oil prices, inflation, tuition fee hike, predictions of an earthquake or rumors of another coup. Then you sober up, drink an espresso and chant your haunting version of I Love You for Sentimental Reasons.

In one of our Red Box parties, a very feminine friend, grabbed the mic, climbed on top of the table and sang, Lakas Tama, with matching head-bang. We all sat there, our mouths open! We never thought she had it in her. An officemate surprised everybody when he suddenly dropped on the floor like an epileptic in the middle of I Don’t Wanna Miss a Thing, imitating Aerosmith’s vocalist Steve Tyler’s vocal histrionics. A very macho friend got drunk, sang Diana Ross’ Touch Me in the Morning, and did a center split like a ballet dancer. After that episode, we never looked at him quite the same way again.

And here’s a secret: one of my frustrations is singing Aegis songs like Luha, Halik, or Basang-Basa sa Ulan. A friend and I even tried rolling on the floor while singing Luha but we couldn’t match Aegis’ vocals (yeah, we were a bit loaded when we did that stunt!:D). My top 3 videoke songs are:
1) I Will Survive
2) Better Days
3) Superstar

But a Pinoy videoke experience is not complete without somebody (usually a man, balding, with a beer belly) singing---

I ate it up and spit it out,
I faced it all and I stood tall,
And deeeeed eeeet my way!

Applause! (But be on the look out for some juramentado ready to attack the singer with a fork!) 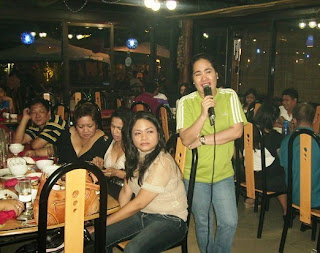 it's My Way or the highway 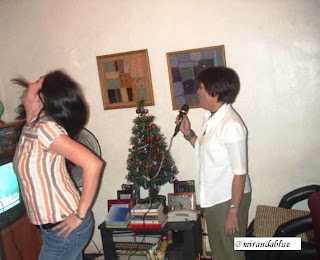 a song and dance number 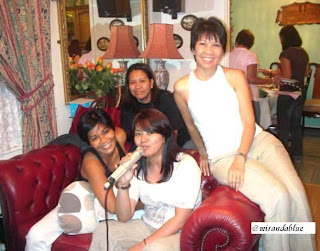 our videoke party in London 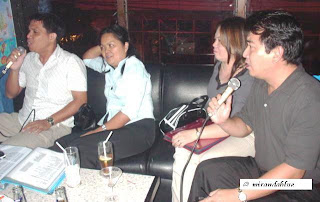 with friends from Cebu 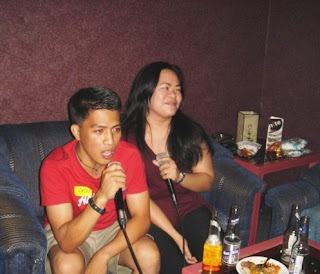 a Bon Jovi-wanna-be and his muse

hehehe! this made me laugh. when my friends and i go out for a videoke escapade, i always tell them not to sing MY WAY if they don't want to be killed. so many died because of that song... literally. LOL! :)

I don’t understand why violence in videoke bars usually connects with somebody singing My Way. It’s a mystery to me! Does the song trigger some hidden rage, a passionate dislike to the song and singer that drives people to kill? Psychologists should look into this phenomenon.:D

Another song that gets murdered during these videoke sessions is Carole King's "You've Got A Friend". Not a few times have I heard people murder a particular line in this manner:

I do agree that a lot of us Pinoys are hams. :)

Right now, my neighbor is at it again...and it's only Saturday! :( I should have taped his version of MacArthur Park---papatok sa YouTube, I swear!:D

Not only hams, Panaderos...malalakas talaga ang loob despite the lack of talent. Hahahaha

Haha, indeed! Its like almost every pinoy family here owns a Magic Mic!!! When someone comes home they had to bring back a mic as someone asked them to buy it for em.

As for us, hubby had something else for me but works well as karaoke too...I did improve with it lol. So what's the highest score you got? =D

I only have vcd's, no Magic Mic, so we don't have scores. But I'm sure I'd score an embarassing 25 with Aegis songs! Hahahaha

Magic sing ba yun? haha sorry, its when I get hold of it naku, very small chance I'd let others have it.

Hubby bought singstar for ps2 but since the songs are limited we had our own karaoke player downloaded with my songs of choice! Aegis here are Patok! I can't pull off Halik or any of theirs neither Heart's Alone...*sigh*

Naku, with my officemates, you would wrestle the mic out of their hands! Di na kailangan pang pilitin.:D

thank god for the magic mic! hahaha! in tokyo too, pinoys love to jazz it up. after sunday mass and lunch, its off to the karaoke box!

I guess pinoys are born performers...and our love for life is evident in our love for music. Thanks for visiting, Caryn.

I don't want everyone die from singing "My Way" to any videoke machines.