Memories from the big chair 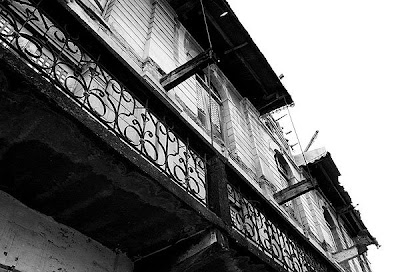 Old houses remind me of my childhood at my grandmother’s house in Valladolid. It was an old Spanish house with a huge ballroom, big rooms with antique chairs, and wide windows overlooking the highway. I remember the echoes in that old house...the lingering traces of laughter, of my aunts playing mahjong on weekends, of my grandmother singing Besame Mucho, of fading footsteps, and the chatter of women-weavers on the ground floor.

"Hablon are hand-loomed textiles woven by women in Western Visayas who have the tradition of weaving for more than 150 years. Hablon fabrics come in muted colors and sometimes combined by silk threads."

The hablon-weavers were headed by an old woman, Tia Tonia, who fascinated me and my sister because of her bright red lips and black teeth. We watched Tia Tonia prepare her nganga (mama in Ilonggo), the ingredients of which were kept in a knotted hanky hidden under her chemise, delighted by the ritual. One afternoon, she taught me and my sister how to put together just the right amount of bonga (fruit of areca palm, a green-colored nut), buyo (leaf of betel piper vine) and a dash of lime to chew on and produce a blood-red juice that we gleefully spit out---checking who has the most vivid red spittle. Sharing betel chew with the women after the afternoon siesta was our bonding time---my sister and I felt like grown-ups!

...aside from assuaging hunger pangs, betel-chewing is believed to strengthen the teeth and gums. The Spanish chronicler Pigafetta, describing the customs of the islanders in the 16th century , wrote that “it is very cooling to the heart, and if they ceased to use it they would die.” The betel nut tradition once bound together Filipinos from the Cordilleras to Sulu. ~ from "Hidden in the Heart"

Everyday, there was a fiesta atmosphere in that house, with relatives and friends coming and going, guests at every meal. As a child of 8, there was always some corner in that house to be explored, to hideout and build my kingdoms of make-believe. The front staircase was my favorite place--- a grand 13-step staircase. Sitting on the steps, I would watch people come and go and listen to snippets of conversations; or listen in to afternoon soaps from a transistor radio the weavers were avidly tuned in to.

The old house was a landmark that people would tell the bus driver where to get off. “Sa balay daku lang,” the conductor would yell at the driver, and the bus stopped in front of my grandmother’s house. Balay daku means big house. I would climb in my grandmother’s big chair by the window, count the buses that stopped by, and sometimes wave at some stranger who smiled from the bus window.
I miss that old house, with its cracked paint of yellow and green, latticed windows, and creaking doors. It was torn down when I was 13. When I see an old house, I always wonder about its history...the people who lived there and those who left their scent and footprints.
Birds and butterflies
dart
down
canyons
between tall buildings
looking for a place to hide
as the sky
above the city darkens
and the rain begins
timid at first---unsure
then creeping
into window ledges
and foraging along the sidewalk.
They're tearing down the old house across the street.
And the old woman who sat cushion high
behind the flower boxes
is gone.
Even the children who played along
the broken sidewalk
have disappeared
and their chalk lines
are washed away.
Only the cinnamon-colored cat
preening on the shop window
is unconcerned...
as night begins.

What a wonderful way to spend one's childhood -- in a huge house with plenty of people and activities.

Sayang nga..but living in that house was no longer healthy at that time. There was a huge rice mill nearby and the saw dust (ipa ng palay) from the rice mill was a health hazard, it also permeated through the wood. My grandmother was afraid that one day the whole house would just collapse. I’m just grateful for the great memories I had growing up in that house…para s’yang Disneyland.:D

I love this post about your grandma's house and it certainly is a pleasure to know that you are from Valladolid. I have passed your hometown many times but have never gone around town - except to your beautiful church and the adoration chapel beside it.

It's a pity that they had to tear down your lola's house. There are plenty of old houses being torn down around Negros... that's why I am in a hurry to take pictures of them!

Salamat gid for visiting my blog!

Anyway, I guess what matters are the memories we have of the place. Although your dear grandma's house no longer stands, it continues to occupy a special place in your heart because of memories of all the great times you spent there.

Hi Daniel. I wish the house still stands...a place to gather the family together like it used to. I guess I'm just a bit senti.:D

That old house symbolizes something significant in my childhood. It was place where I was always a child, no worries, no fears. In my mind, it’s still a pleasant place to run to when adult life becomes too stressful. Thanks for visiting again, Panaderos.

It’s sad to see those old ancestral homes being torn down to put up some monstrosity. It’s a sign of progress daw! I remember reading about Negros Heritage Society…aren’t they suppose to protect these ancestral houses, churches and other landmarks? Yes, Valladolid has an old church…I was there on Viernes Santo. The old convent was destroyed by a fire recently, and the parish is building a new one.

Looking forward to your photos...the photos you posted were beautifully composed.:)

Beautifully written. Such intimate memories conjured by a chair. Thanks to your prose, I can imagine how those days in that Spanish house were spent.

Your history, via a chair.

Enjoy the weekend---bed weather or not.

Hi Miranda,
I just stumbled upon your site and I got a chuckle from reading the piece about your Lola's house. I can relate to your story because I have some warm memories about my Lola's house also, but especially about doing the "nganga" with her.. I would tell my kids (3 boys) about how I would have to gather the palm nut, leaves and the creamy paste (didn't know it was lime paste!)and make the nganga for her. By the way we're from Iloilo (Guimaras).