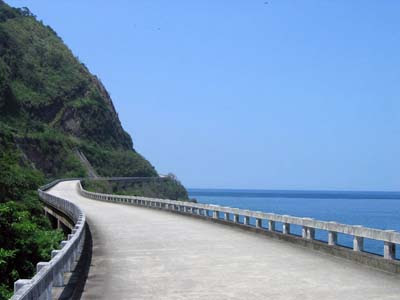 I dream of driving on this highway someday soon. And this would be the perfect song to sing along...

"Afternoon Delight" was a quintessential soft rock chart-topping single from the Starland Vocal Band's debut album in the summer of 1976, which peaked at #20 on the Billboard Hot 200 and remained on the album charts for 25 weeks. That same year, the band received a Grammy Award for "Best Arrangement for Voices" and the "Best New Artist of the Year." They also received 3 other Grammy nominations and "Afternoon Delight" is in the Rock 'n Roll Hall of Fame.

Hi Luna! I drop by often but not leave comments, but today I got the time =D

I had a photo of this same viaduct sent it by a friend.

I'd definitely love if you have other shots taken while in a vehicle...Musta na?

I remember this song like a forever LSS (last song syndrome)...at some point it would just pop out of my head without really thinking what the lyrics are hehehe.

Hello, Gizelle! I'm doing fine...glad you've had some free time to blog hop.:D The photo in Patapat was taken a few years ago during my vacation with friends. I saw Pagudpud on TV on Saturday night so I looked for the photo.

Yeah, I have those moments, too. A song or a melody would suddenly pop out. Kakainis lang minsan, yong mga hate kong songs ang bigla kong naha-hum, like those April Boy songs! hahahaha

This band was one of those one hit wonders for they disbanded within a year after Afternoon Delight hit the charts. The song remains popular to this day and I still hear it played quite often on oldies stations that I listen to.

Songs like Afternoon Delight has an enduring appeal, and brings back that old feeling for "oldies" like us! Hahaha Nag-aminan na tuloy.:D

Tanggapin na natin...oldies stations are more fun to listen to because we can sing along. I could never sing along with hip hop or rap music!:D

You are really getting to be a fine photographer, Luna :)