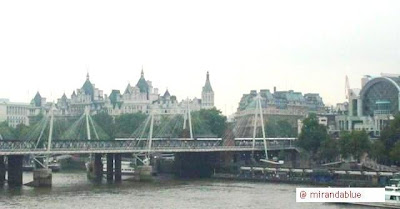 Hungerford Bridge
For Photo-Hunt’s “support” theme this week, I’m posting photos of a few London bridges crossing the River Thames. The weight of a bridge, and of any traffic on it, is carried directly to the ground by the “support”, often called piers. The piers take the full weight of the load, and support-piling depth is one of several factors that determine a bridge’s load-carrying capacity. These photos were taken in 2005 while I was on a cruise along River Thames from Tower Bridge to Greenwich Pier.
The top photo is Hungerford Bridge, a steel truss railway bridge, sometimes known as the Charing Cross Bridge. This bridge was designed by Isambard Kingdom Brunel and opened in 1845. 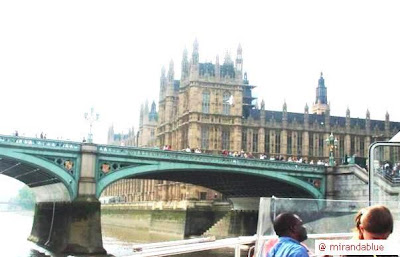 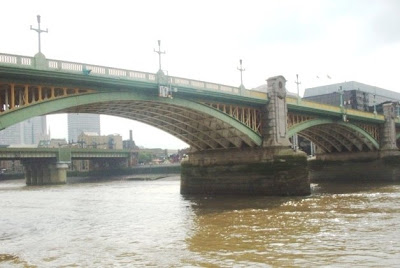 Southwark Bridge is an arch bridge designed by Ernest Goerge and Basil Mott, and was opened in 1921. This bridge was notable for having the longest cast iron span ever made at 73 meters. 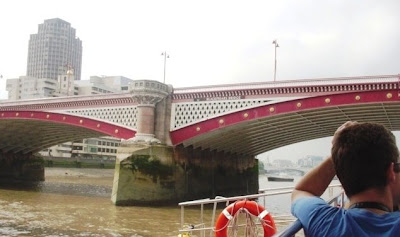 Lambeth Bridge was opened in 1932 and has a five-span steel arch, designed by engineer Sir Geroge Humphreys and architect Sir Reginald Blomfield. The most conspicuous color in the bridge’s current paint scheme is red. The bridge was used for the movie "Harry Potter and the Prisoner of Azkaban" for the scene where the Knight Bus must pass between two Routemasters. 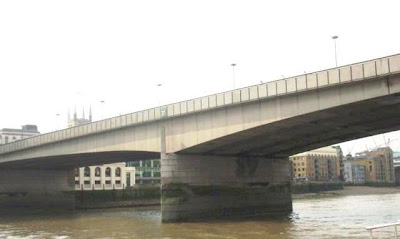 Waterloo Bridge was built during World War II by (mostly) female labor---a quirk of the War as the men were away fighting for King and Country. The name of the bridge is in memory of the British victory at the Battle of Waterloo in 1815. The original bridge on the site was opened in 1817 but serious problems were found in its construction. The first bridge was demolished in the 1920’s and replaced it with a new structure designed by Sir Giles Gilbert Scott.

I am a bit of a history buff so I enjoyed reading the post and the fact that you were able to relate your photos to a bit of their history.

I love all the bridge photos and the historical value you shared of each!!! Excellent Photo Hunt!!

My Photo Hunt is posted. Stop by if you can, would love to have you visit with me. Have a great weekend.

I love bridges! Good idea for this week's theme.

Great chices. I love the new Hungerfood foot bridges. Far better than the narrow old one that was on this side of the bridge. Happy weekend

Enjoyed seeing and learning. I still want London Bridge to be there instead of here! Thanks for stopping by Spatter...

bridges' support underneath are perfect examples for the theme.

I love bridges too and love your choices for this week's theme, very beautiful!

Love your photo of Hungerford Bridge in particular. :)

Great shots and very informative posts on each of the bridges that cross the Thames. :)

Great choice for today's theme... Thanks for dropping by.

Very interesting infos about these Londonderry bridges! That Waterloo bridge is also quite something----very female in power! :-) My hubby would usually take to appreciate structures in Germany. Engineering is really what makes the world go round---even more than money! Of course, that can always be open for debate (heehee!)
Thanks, Luna!

Beautiful series of bridge supportM piX! I enjoyed reading the interesting arrative as well. ThanX for stopping by yesterday via the photo hunt.

Hi, Gizelle! Oo nga, brown ang water ng Thames. I think the poor water quality is caused by pollution. Of course, it's not as bad as our Pasig River but River Thames has its share of problems of industrial discharges, and people throwing their litter.

Of course maganda! brown water adds interest pa di ba...hope they do something to save the river....anyway rivers do have "healing power" as long as man stops putting waste, lilinis sha uli...sana!

sige na nga, maganda na! hahaha ang bilis ma-convince e no?! yes, i've read an article that the quality of water now is much better compared to the past 20 years. i'm sure the UK gov't is making a big effort in maintaining the cleanliness of River Thames. hindi tulad dito sa atin na laging ningas-kogon ang effort to save Pasig River. kasi ang mga taong nakatira sa tabing-ilog, wala ring paki---they're leaving it up to the gov't to clean up their mess.