Daydreaming [and a Tag] 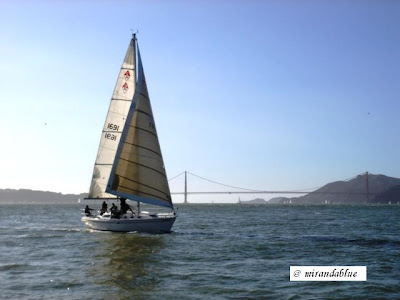 sailing in San Francisco Bay, the Golden Gate Bridge at the background

I like to daydream. It's one of my escapes when I'm bored or stressed. It's also a motivator when I need to get creative. I guess I just have an over-active imagination.

I daydream about all sorts of things. I never told anybody but when I was a kid, I used to daydream I was Kelly (played by Jaclyn Smith) of Charlie's Angels. In my grandfather's laguerta, there was a huge uprooted acacia tree and it was my favorite playground. I would sit at the longest end of the root and daydreamed of being a pirate princess riding the waves. 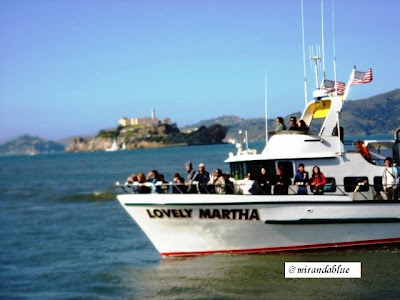 a boat-shaped Alcatraz at the background
I'm an adult now and yes, I still daydream.
While stuck in traffic, I imagine myself driving a red Porsche along the Italian Riviera. Most people would rather go to sleep during long trips, but not me. I prefer to daydream...build my castles in the air. In one of my trips to Baguio, I imagined myself living in a rustic cabin on top of the mountain, complete with a satellite TV and wi-fi. In Boracay, I daydreamed of owning a yacht where I also live, read all day, and sail from island to island. I imagine myself in an African safari as a professional photographer. I imagine visiting the Taj Mahal with Richard Gere (my imaginary boyfriend) where he pledges his undying love for me. I imagine being rich enough to have my own shelter for battered women and abused children, and have more than enough money to send my three nephews to Harvard or Oxford (this would probably remain a dream, unless there's divine intervention on their grades).

As I get older, my daydreams have become a little bit realistic (well, except for Richard Gere and his undying love, but hey, who knows? ). I don't think that old age has made me less imaginative. I'd like to believe that I'm now aiming for things that I can possibly attain. I once daydreamed of going to Paris and walk by the River Sienne under the moonlight. Well, it was not exactly under a full moon, but I was able to visit Paris two years ago and walked by the River Sienne from the Louvre to the Notre Dame Cathedral. I dreamed of experiencing New York City (yeah, from watching Sex and the City :D), and it happened. I don't know what will come next. I hope it's the rustic cabin on the mountains or a DSLR camera!:D I have a cousin who once showed me a scrapbook of her dreams. A picture of her dream house, her dream car, beautiful places she would like to see. She believes that if you have visual aids of your dreams, it's easier to strive for them. No, I don't have posters of Richard Gere or a vintage red Ferrari at the ceiling above my bed.:D

Is daydreaming bad? No, i don't think so. As long as you separate your daydreams from reality, they're a great motivation for us to work harder for a better life. I'm a dreamer. There are a lot of things that I dream of doing before I die. Some I've already been able to attain, but some I still need to work for.

How about you? Do you think dreams can come true?


While you're thinking about the question and your dreams, I'm doing the Tag from Lawstude.

1. Link to your tagger and post these rules on your blog.
2. Share 7 facts about yourself on your blog, some random, some weird.
3. Tag 7 people at the end of your post by leaving their names as well as links to their blogs.
4. Let them know they are tagged by leaving a comment on their blog.

1. The younger years: My first fashion show was at age 3 where I wore a muumuu, kalachuchi garland, another kalachuchi at my right ear, and my beaded slippers were chewed by a family dog. I won my first singing competition at age 5 with the song “Help Me make it Through the Night. Prize money was 10 pesos. I practiced singing on top of the dining table with the whole clan as my critic and audience.

2. I have been to Thailand, China, Hong Kong, Taiwan, Japan, US, London, France, Italy, Amsterdam, and three quarters of the Philippines---half the time, I traveled alone.

3. I cry at the lamest of movies. I deny crying when Gabby married Sharon. I cry at TV commercials, Lupang Hinirang, and one time at Don McLean’s American Pie while riding a jeepney. I cry at weddings and christenings more than I cry at funerals.

4. I have cravings for pop corn, salmon sashimi, squash seeds and raw oysters dipped in vinegar with chili.

5. I pull my hair. Shaving my head is one of my favorite fantasies when I look in the mirror.

6. I once dreamed of becoming a painter, a writer, and an architect. Sometimes, I wish I’m a social worker, an activist, an assassin, or a barrio doctor.

7. My weary spirit is soothed in bookstores, with body massage, and at the ladies’ shoe section.

I'm tagging 7 blog buddies whose blog sites I visit often, and are nice enough to leave their comments here. No pressure, no rush...no need to reveal your deep dark secrets.:D

Okie I'll do this soon...we have lots in common hehe,later sabihin ko kung alin =D Thanks!!!

Got it. It will be done. I just need to compile my darkest secrets. Hehehe :D

I have been to Thailand, China, Hong Kong, Taiwan, Japan, US, London, France, Italy, Amsterdam, and three quarters of the Philippines.>>>>AMAZING!!! galing naman.

number is weird but cool.

since you didn't tag me (hahaha!) wala naman akong blog!... I will comment on the daydreaming. I learned from daydreaming is that you can get what you wish for kaya careful lang. When as a child I daydreamed that my house would be big, my husband guwapo and my garden even bigger. I got them all...and I have to "relate" with them 24 hours a day! Nope, I'm not complaining :-)!

Thanks, Gizelle. Looking forward to it.:D

I guess you're referring to no. 5, Dong.:D Weird nga talaga! It's always great to travel when we get the chance. Thanks for visiting.

I wish you have personal blogsite, Bernadette, para kasali ka rin sa tagging.:D It would be an interesting read.

So the 'be careful with what you wish for' still applies? Daydreams tell us a lot about ourselves. They drive us to make things happen. Thanks for visiting, Bernadette.

You are living a good life, having travelled much. Nice to know more of you.

I'm fortunate, photo cache, my job takes me to places. In the process, the travel bug has bitten me. Thank you for droppin' by.

thanks for playing the tag. what a nice view. i would definitely love to go there.