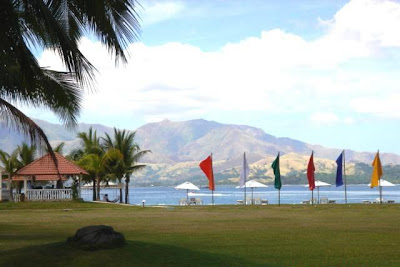 White Rock in Subic, Zambales
My friends and I drove to Subic one weekend last year to see our friend, Nina, and experience the Zoobic Safari. Rey was the designated driver and I was the navigator, entertainer and all-around commentator. Dowie and Joan were just enjoying the ride and the sights along the way. I don't remember ever visiting a zoo in my life, maybe because I grew up with animals (no pun intended). I also work with monkeys so there was no need really to go to the Manila Zoo. :D
Reason why Zoobic Safari was an exciting trip for me. I had ostrich meat once and it tasted like red meat, but when I was face to face with an ostrich, I silently promised the gentle bird that I would never eat his meat again. The most exciting part of the safari was when we were brought inside the tigers' playground aboard a jeep with protective grille. We were warned by the tour guide not to expose any body part outside the grille but I was desperate for a shot at these big cats. Hanging out from the grille were my hands holding a digital camera, about 2 meters away from the tiger. My heart actually jumped when the big cat looked at me taking his picture. 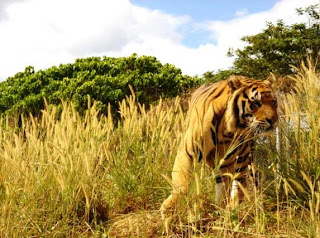 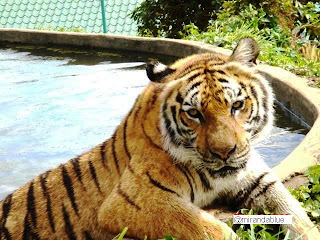 up close and personal

The safari also included a tour in the tigers' den where we observed how the giant felines mate. According the guide, the female tiger is fertile for only a few days that copulation is frequent during that time period---from 40-60 times a day! Whew! I took a video of the big cats 'doing it' (hehehe) but it was over after only a few seconds. No wonder they have to do it 60 times a day! :D

Oh, if you're blood-thristy or you hate Chicken Joy, there's a part of the tour where you can feed the tigers with live chicken. My friends and I agreed that we like our chicken dressed and battered so we skipped the live chicken ritual. 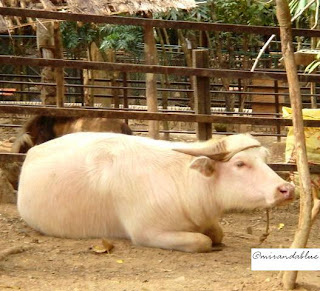 There's a Serpentarium where various reptiles are housed. I played with snakes and other reptiles at my grandfather's farm when I was a kid. A childhood friend didn't talk to me for months after I played a prank on her when we were about 8. It was really nothing---I gave her a match box telling her it contained a spider her brother was looking for. Inside was actually a small green snake which I got from my grandmother's vegetable garden.

These reptiles are fascinating. 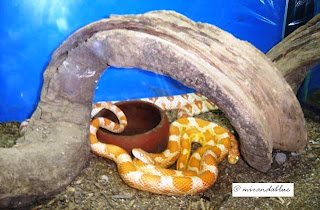 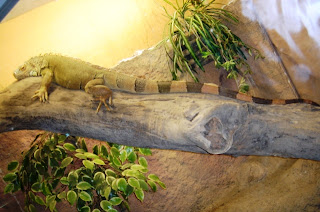 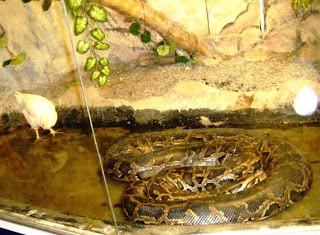 sleeping with the enemy

National Geographic Channel is where I get to see wild and endangered animals in their natural habitat like this black bear. In Zoobic, the bear was having a tantrum when we visited his cage, the growls were a bit scary. It's understandable---I'll have bad temper every day if I live in a cage, too. Poor bear. 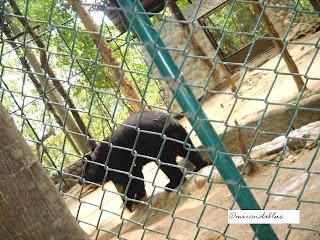 in a bad mood
We rode in this 'choo-choo' train around the park. 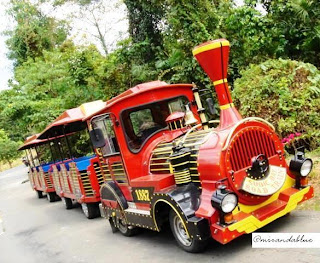 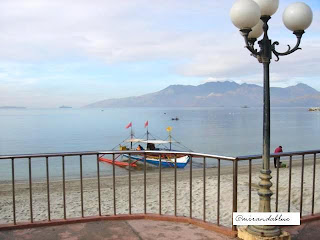 view from our hotel, Mirage Resort 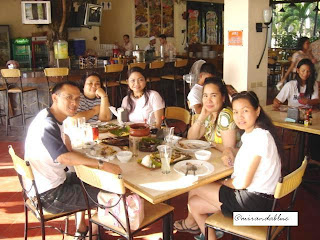 We planned of going to see the Ocean Adventure after Zoobic Safari but being senior citizens that we are, we voted to drive around Subic then took our afternoon nap in preparation for a night out in 'Gapo. Nina took us to a pizza place, said to be the favorite hangout of local folks, where we pigged out on pizza, chicken, etc. The band was good and one of the singers was an outstanding comic.
Before driving back to Manila the next day, we had lunch at the White Rock Resort.
Posted by Unknown at 7:56 PM

is the zoo still open to this day? waaaa i wanna go there :)

yes, zoobic safari is open. my friend's sister brought her kids there after the new year. the kids were had a great time but a bit traumatized with the live chicken being fed to the tigers.:D

Thank you, Gzel. Tukayo mo nga pala ang resort.:) It was also my first time to see an albino carabao---he's so cute.