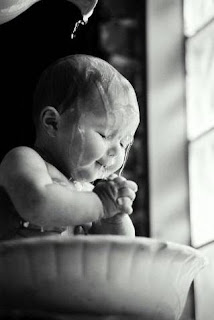 I've wanted to write this blog for weeks now but I don't know where to start, and what to write exactly to express what's inside my head. This really started a couple of months ago when my co-workers and I had lunch with one of our service providers. R, a single guy, told us that somebody sold him a newborn baby for P6,500, and he bought the baby! The baby is an 8th child of a poor family and the parents decided to give up the baby. He registered the baby boy as his child, took the baby to his hometown in Bicol and left him in the care of his sister. He sends support each month and visits the baby.

When we returned to the office, my co-workers started to suggest that I adopt a baby instead of lavishing all my love and attention to my dog, Fritz. What's wrong with that? But that night, I thought about it. Would a baby make my life happier, more meaningful, and more purpose-driven?
This is not the first time that I thought about adoption. A few years ago, my sister-in-law called about a college girl who gave birth to a beautiful baby. The girl wanted to give up the baby for adoption…my sis-in-law asked me if I'd be interested. My first instinct was to say yes…but after a few hours, the thought of raising a human being scared me! I'm surrounded with mothers…women at work, my girlfriends, and relatives.

I know what some women would be willing to go through just to have a child. Many women would leave a fulfilling career to be able to conceive. My high school friend went through an emotionally draining and expensive process to get pregnant. A co-worker had 4 miscarriages but she kept on trying until her last and 5th pregnancy where she and her husband spent almost half a million pesos to bring the fetus to full term.

I've been asked many times why I don't have a child. It is difficult sometimes to explain that I remain childless simply because I do not have a husband. I am uncomfortable with a child not having a father---no physical person u can look in the eye, no grave to visit, no photo album to pore over to see where the resemblance is. I think fathers play an important role in the lives of children. If I'd say I've been married 2 times and failed at each marriage---that would be fine, that would be normal. But never to have married is not.

There are married women who even develop certain smugness when they learn that I am not married and childless. When did I get to be a bad person because I never married? How did that happen? Because I was smart enough to walk away from a couple of guys who were pretty good catches, I may add---but in hindsight my instincts were absolutely right---it wouldn't have been a good marriage. When did I get to be damaged goods? So I've been told that I'm too picky, that my standards are impossible, and that I should adopt. Some well-meaning friends and relatives seem to make it their mission to remind me time after time after time that I'd grow old alone without a child. I was told that I don't really need a husband, just a child to take care of me when I am old. They maybe right (that I don't need a husband)…but I believe that bringing a child into this world for the purpose of having somebody to wipe my ass when I’m too old to do it, is a very wrong reason to have a child in the first place. I like babies, especially when I could return them to their parents after a couple of hours. I have encounters with children…they usually run away from me because I enjoy making them cry---by biting their pudgy fingers, tickle them, make scary faces, tell them scary stories, and then make them smile/laugh. I felt "maternal" when my nephews were still babies and a couple of times just recently. In the elevator at SM, a few-month old baby kept on smiling at me even when I was doing nothing. Suddenly, I felt my throat tighten and I had an urge to grab the child from her mother's arms and run away. That would be a sight---Look! A crazy woman kidnapped the baby! In a plane from HK, a boy of about 3 was trying to talk to me. The boy's dad tried to distract him but he kept on talking to me in a language of 3-year olds, and then later, sat on my lap. Well, I had the window seat---I guess, he wanted to see the clouds outside. Kids at the beach, malls, and parks are talking to me---and I don’t know why!

I bumped into a former officemate in the mall one weekend. I never really liked the woman but when she said hello (like we're old friends), I politely said hi. After the usual chika, she asked if I have children. When I said no, she said that she only felt complete when she became a mother---that it totally fulfilled her. I thought it was a blatant attempt to make me feel like I was not worthy because I am not a mother. Considering the source, I didn't take it personally, but looking at her---with dry hair, wrinkled skin, sagging boobs, my guess is, she never had an orgasm in years! OK, that was bitchy.:D

But wouldn’t it be nice if we respect our differences? It’s not that simple that this woman is childless---don’t assume that she’s not capable to nourish, cherish or indulge another human being. I find it amusing, even endearing when a man goes against the grain and does something like cross-stitch, but I know people who are suspicious of a woman who does not wish to nurture. I truly believe that we limit what it means to be a woman if we define womanhood within the narrow confines of motherhood alone. It is often difficult to understand the choices other people make. I can no more understand how my best friend feels about giving birth to her daughter than I can imagine winning a gold medal in the Olympics, performing brain surgery, or walking the streets begging for food. We give birth to ideas, to relationships, to works of art, to hope, to peace, to children, and to each other. I go on, day after day, doing the best I can. And I would like my decisions in life, whatever they may be, to be respected, and my choices considered as valid as anyone else's.

Babies and children gets attracted to Good Samaritans. I have observed that with my 3 kids. I don't know how but they somehow have a nicer approach to some people and later I myself find those people are easy to be with.

I don't know if writing this would offend you or make you feel better, but I'll write it anyway, its easy to be nice with other kids, its different when it comes to your own. =) It's not easy to raise a reponsible person =(

It makes me feel better that I'm not different, after all! I'm very patient with my nephews, young cousins, and friends' kids...maybe because I only spend short time with them. I'd probably go crazy if I have to take care of a child 24/7! One reason why I prefer dogs.:D

I lost my 10-yr old nephew in the mall years ago! Well, tumakas sya when I was not looking to play pc games. Having children is not for the faint-hearted. And if someday I'd decide to raise a child, I'll make sure I'm ready---mind, body & spirit!:D

Wahaha! I imagine a bewildered you looking for your nephew! lol. When Alex was still about 3 yrs, we went to the grocery (not as big as sm though) and she was trailing me, few minutes, nawala! my german then was like a kindergarten kid learning english! Pina-page ko na lang hehe, binalik naman. And more than thrice, my second son would wander about, madali in his case, he would shout wherever he is: "Mommy, nandito ako! Mommy!" =D Katakot pero katawa! Lol.

I almost had a nervous breakdown in the mall! He was paged, the guards were looking for him...I saw a group of my cousin's friends, tumulong din sila maghanap. My knees were shaking when we found him---kinutusan ko nga!:D

Even the best mothers, I'm sure, have lost their children in a crowded place at one time or another. With my dog, he follows me around, even without a leash.:D

I think you should not ask yourself if you are abnormal because you are not married or because you have no children. As you rightly point out it is nobodies business.
What is important is what you wish and what you want to achieve in life. If you don't want to marry and have children than this is your right and other people should mind their own business.

Nothing is perfect in this life. Everything has advantages and disadvantages. When you are single there are moments when you wish you had a companion and a family of your own. And when you are married there are moments when you wish you were still single. There are difficult moments in married life too.Whn you quarrel with your husband or when your kids don't want to listen or do stupid things.

Life is like that. You need to say yes or no all the time and each yes or no might change your life for the better or the worse for always.

Try to find inside your heart what you really want and what really makes you happy and then go for it.

Anyway, it really sucks that women are sometimes perceived merely as layers.

I also felt the pressure of conceiving a child on my first months of marriage. It took seven months before I got pregnant. Everyone I knew would ask me everytime if I was already with a child. I even sensed my hubby was becoming impatient and I felt pressured that I should bear one. Inis ako noon talaga. They didn't even care to know if I was ready for motherhood or not. Goodness, I did not even know how to hold a baby in my arms!

You are right. One should not adopt or have a child just so they could have someone to look after them when they grow old.

Thanks for sharing your thoughts, Sidney. You're right, life is not perfect. Being with my married friends taught me that marriage isn't always romance and good times. And being single and childfree has its own advantages.:)

Hello, Rhodora! I thought my comment in your blog was not posted. There was an error when I posted it. Anyway, thank you for leaving a comment here.

Most people assume that motherhood is a natural thing for women, like breathing. Like most Filipino family, I was expected to marry and have children. My lolo even asked me one time if I was a lesbian! :D Even my mother feels the pressure when asked why her daughter is still unmarried and childless.:)

omg luna... it feels like im reading a post i would write in prolly 5-10 years from now!

but seriously girl... OMG i see myself in you

I guess my thoughts are common in single women who reach a certain age and still ambivalent on having children, or getting married.

Thank you, Gilbert, for sharing some lines from Joan Brady. Appreciate your visiting this page and leaving a comment.