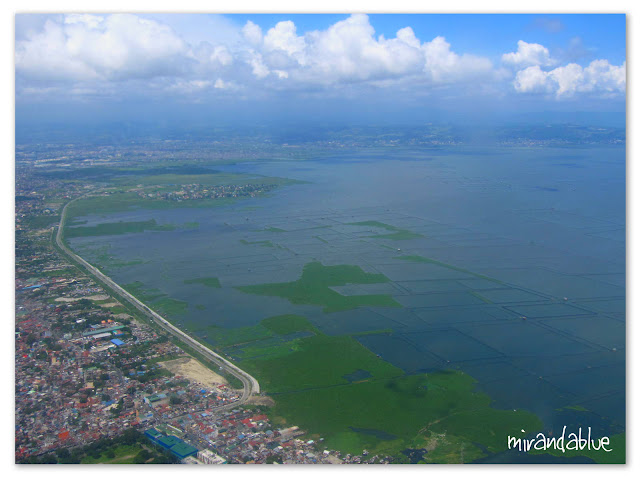 This was the first time that I was able to take an aerial photo of Laguna de Bay---well, at least a part of Laguna de Bay.  The heavily populated area on the lower left of the photo is part of Taguig City.  The superhighway at the edge of the lake is part of C6, a beltway that will connect the southern provinces to the northern provinces of Luzon without passing Metro Manila.

Laguna de Bay is the largest inland body of freshwater in the Philippines with a total area of 95,000 hectares,  with an average depth of 2.8 meters and maximum depth of 20 meters.  It has a 238-kilometer shoreline that covers 49 municipalities and 12 cities in 3 provinces. 21 tributaries drain into Laguna de Bay and the only outlet of the lake is the Napindan Channel  that merges with Marikina River and formed the Pasig River, which meanders along a 24-kilometer course and eventually discharging into Manila Bay.


The lake supports millions of people living in its watershed.  People depend on it for food, transportation, irrigation, among others.  Fishery  and aquaculture are major industries in lakeshore communities, and the lake is the primary source of freshwater fish in the country. Laguna de Bay also serves as a reservoir for flood waters to minimize flooding in Metro Manila during rainy season and one of the sources of water supply.  The lake is home to a variety of organisms, 31 species of fish, 269 species of plants and habitat for various species of birds.  About 48% of flowering plants and ferns endemic to the Philippines are found by the lake.

Because of the lake's importance in the development of towns and cities surrounding it, the water quality and general condition of Laguna de Bay are closely monitored.  But environmental issues brought about by rapid population growth, land conversion, industrialization and over-fishing are slowly killing the lake. A retired University of the Philippines professor was quoted years ago that the coliform level in the lake is too high "our microbiologists couldn't count it anymore." 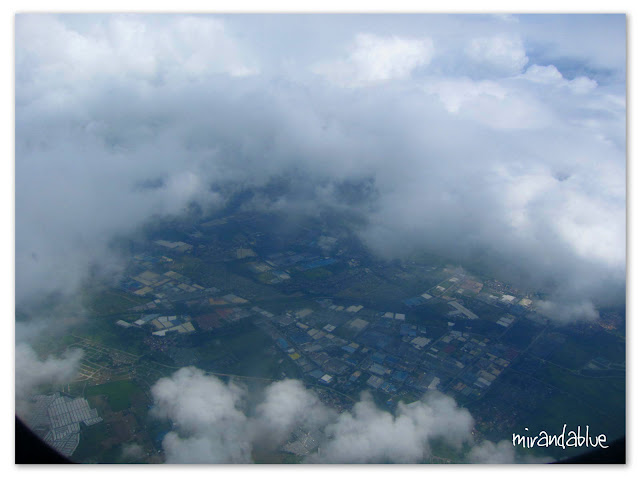 How sad to see such an important lake being abused in this way.

Hiya! Thanks for dropping over my blog and the comment.

Your photos took me back home. You've done really well capturing the Laguna de Bay, something I haven't done after loads of travels here and there.

Have a fab day!

I am your newest follower.

Nice pictures you show. Thanks for the comment on my blog :)

I love the shot through all the clouds!

Great photos. Thanks for sharing.
Have a nice day

Seeing the city through those clouds is quite amazing!

Terrific captures for the day! It is sad what is happening to so many of our lovely areas these days!! Hope you have a good week.

Beautiful colours in that first photo!! Boom & Gary of the Vermilon River, Canada.

A very remarkable shot. Love it.

What beautiful aerial shots. The colors are stunning. It was sad to read about the destruction of the lake. I hope something is done soon before it is too late. genie

A lovely shot of a beautiful lake. I hope people can find a way to save such a wonderful place.

You mentioned 48% of endemic plant species are found in the lake area, do you know where I can find a list of this or which resource has it?