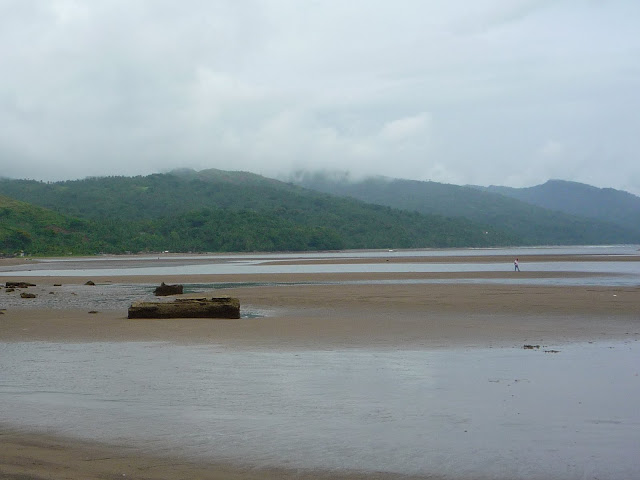 I have a friend who never saw an ebb tide until we went to  Cagbalete Island  last year.  Then we met a  backpacker at the resort who told me how scared he was to see the "waterless" beach, thinking a tsunami was coming.  I find it amazing that there are those who lived all their lives in an archipelago like the Philippines and didn't know about tidal changes.

Most coastal areas experience two high and two low tides per day.  One of these high tides is at the point on the earth which is closest to the moon.  The other high tide is at the opposite point on the earth.  This is because at the point right "under" the Moon (the sub-lunar point), the water is at its closest to the moon, so it experiences stronger gravity and is raised.  On the opposite side of the earth (the antipodal point), the water is at its farthest from the moon, so it is pulled less; at this point the earth moves more toward the moon than the water does--causing the water to "rise" as well.  In between the sub-lunar and antipodal points, the force on the water is diagonal or transverse to the sub-lunar/antipodal axis (and always towards that axis), resulting in low tide.  More here...

funny that your friend will definitely think a tsunami is coming. im not surprised because cagbalete's east coast has that character.

that is a serene looking scene luna :)

Thank you for the information, I learned something today, but ebb tide are common to us, how come your friend doesn't know? Anyway, now your friend knows!

Wonderful explanation of the tides...and what a beautiful photo to illustrate that. It is amazing what people don't know and what they fear because of that. I live near the ocean, so I am used to high and low tides occurring.

Pretty...so very pretty. I also love the low hanging clouds on the hills in the background.

My Wednesday post -Tall Sail Ships Arriving. Lots of photos! Hope you can come take the tour with me!

What a beautiful place! Love to take a walk there especially in the morning. Great shot.

Beautiful picture, like a slice of paradise and I love your explanation of ebb and tide.

I haven't known about this personally while living in PI becos my town was nowhere near the coast, but got educated when I moved here.

However, I haven't been on the beach when it's "waterless" like this. Must be fun beachcombing.

I have to laugh so hard about that tsunami thing. I've always loved the low tide moments as I can see how clean the beach is. And it's as if it is doing some detoxification. :D

We really enjoyed low tides when we lived in Southern California and walked the beaches. So many interesting things to discover when the tides are low.
Happy O.W. to you!

Beautiful picture! It's so interesting how the moon has a large effect on many things on earth.
http://fotoentusiastenfotoblogg.blogg.se/category/watery-wednesday.html

Beautiful photos! Thanks for the great explanation of ebb tides. Didn't know anything about them before!

Interesting and what a beautiful photo.

My husband is a water engineer. I am going to test him if he knows what an ebb tide is. I sometimes learn things that he doesn't know. LOL

i have seen something similar when i was younger, together with my father. i know i didn't want to be caught there at night and the tide's coming in! ..in the first place, ano naman ang gagawin ko dun pag gabi, right? :D