Tomb of the Unknown Soldier [Photo-Hunt] 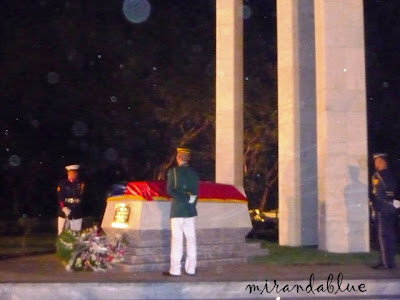 "Here lies a Filipino soldier whose name is known only to God."
The Tomb of the Unknown Soldier at the Libingan ng mga Bayani (Heroes' Cemetery) in Fort Bonifacio. This cemetery was established in 1947 as a tribute to the Filipino soldiers who died in battle during World War II. The 147-hectare cemetery also provides grave services to deceased military personnel, Filipino veterans, former presidents, government dignitaries, statesmen and national artists. 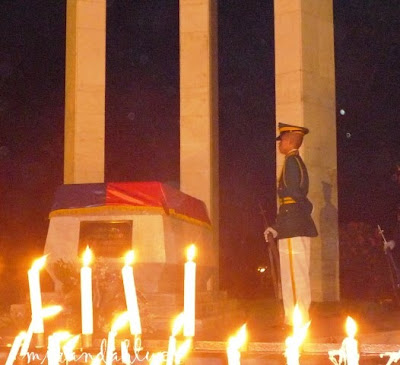 The Tomb of the Unknown Soldier is at the center of the cemetery and behind the tomb are three marble pillars representing the three main island groups of the Philippines---Luzon, Visayas and Mindanao.

I visit this tomb every year, for the past 20 years or so, on All Souls Day (November 1st) for nostalgia. The "unknown soldier" appeals to my somewhat-latent-romantic side---it reminds me of chivalry and bravery, and the idiocy of war. 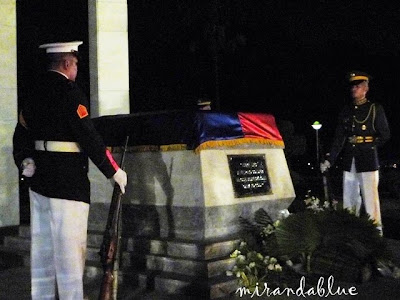 And it's also an opportunity to pay my respects to one of my favorite Filipino heroes---Carlos P. Romulo, soldier, diplomat, politician, journalist and author. 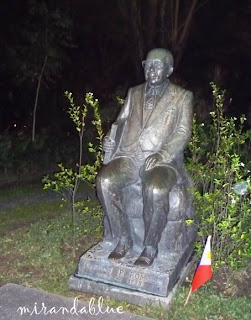 Posted for the theme "veterans/military for Photo-Hunt
Posted by Unknown at 10:27 PM

Carlos P Romulo is one of my student days idol for all his wisdom ... when he became the First Asian UN Secretary, he told the media that he felt like Gold surrounded by Silver because he was the shortest dignitary in that circle.

Sorry for being pretty slack. I'm trying to catch up.

Carlos P. Romulo is also my hero. In my Office, all the old bosses have great stories about him.

What wonderful pictures! Thanks for sharing them.

What a food artist you are!! You are a gifted chef!

Thanks for stopping by and leaving a comment on my blog. Our grandson was enjoying a sunny fall day and a visit to the goldfish pond. We have had alot of rain so it was so refreshing to get outside and feel the sun. He totally loved it-like you said, mud and water draw little boys like molasses draws flies!!

The soldiers in the photos look very smart. Hope none of them will ever have to fire a shot in anger.

Great take on the theme. THere is something sacred about the tombs of unknown soldiers

wow that is something. seems like a good place to visit

And the tribute to your favorite is perfect also.

One of MY favorite Veterans is on my post this week. Come see him if you have some time.
Click Here

Greats photo finds! :) I just wish we Filipinos live for what our heroes died for.

My PhotoHunt is here.

Carlos P. Romulo was truly one of the country's greatest statesmen. I have yet to see someone take his place. Great take on the theme :)

Neat photos for the theme, Luna. I've always heard about LB but ive never really been there. I wish one day i can.

Thanks for the visit and have a nice weekend!

A very moving and good post for the theme.

So you also visit every year there... Maybe we'll bump into each other..

Its good to look back of what our heroes have done to defend and liberate us.

Take a look at my HERO

Beautiful tribute to those who served and to a great man!

Great tribute, but I agree with magiceye - it is unfortunate that we have not yet learn to live with each other in peace.

Have a great weekend!
Anna

Nakaka-antig naman nang puso itong picture na ito. I do really appreciate sa mga taong nagbuwis nang kanilang buhay just to keep us safe and our country be peaceful. May they rest in peace.
Thanks for dropping by I do appreciate it.

Even with lots of sad memories to remind us of the tragic effects of war, there are still people who love to fight.

It is always an honor to serve for your country. Nice choice for this week theme!