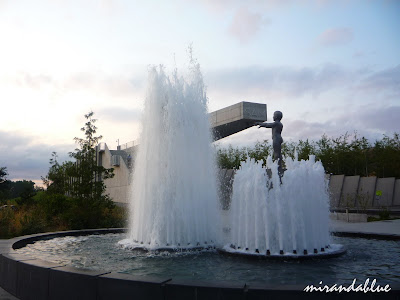 Father and Son is a fountain installed where the Olympic Sculpture Park meets Myrtle Edwards Park at the north-end of Alaskan Way in Seattle. The sculpture includes models of a nude father and son reaching for each other but the other is obscured by the water. The artist, Louise Bourgeois, explains that the nudity and obscurity represent vulnerability and the way male familial relationships deteriorate. Each figure will be obscured by water gushing over their surface. The volumes of water are on a timer to mark the 24 hours of the day, accompanied by the ringing of a bell. On the hour, the water is lowered to reveal the son. At the next hour when the bell rings, the water will rise hiding the son, while the other mound of water will descend to reveal the father. The figures when revealed seem to float in the air above the water. (Source:  Wikipedia) 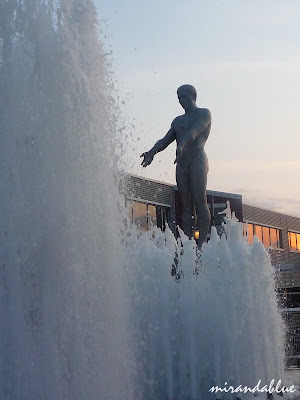 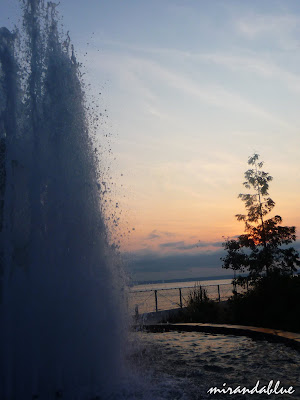 These are great and interesting shots! The fountains splashing with the unique glow of the sun in the backdrop!

This is great.
Sydney - City and Suburbs

Interesting info on the fountain/sculpture. I bet you took a ton of photos on that trip. Have a great rest of the week.

I posted my watery image over at http://ewok1993.wordpress.com

love the perspective on the 2nd picture and the sky in the 3rd picture. great shots.

wow that is pretty fountain falls...Mine is similar...happy Watery Wednesday. My first entry is up...

wonderful water fountains. I am amazed at the art that exists in fountains!
Spirithelpers

Very interesting post. Great shots of the fountains and statues, but really love that watery sunset!

Thanks for visiting my blog and your nice comment.
:-)

You mean they're never revealed at the same time? That's so sad!

It's a beautiful fountain though, especially how you caught it with the sunset.

I have been looking at the big crab and all the food - makes me hungry. Maybe you can eat the crab?
Water in a fountain like it and the sun behind. Good photo, MB

Your photos of this beautiful fountain are wonderful. The last one with a view of the lovely sky is terrific...

Beautiful water shots, you have a nice little sunset going in the last one as well! Happy WW!
Please see mine here
http://www.moorebloglife.com/2009/09/08/watery-wednesday-dont-be-koi-with-me/

so sorry for not visiting last week ... my lifesnippets.net blog got hacked for some reason and i couldn't get to it anymore...
will be transferring Food Friday to this blog... can you please change your FF button link to here: http://pictureclusters.blogspot.com/2009/09/food-friday-blogroll.html

appreciate it much!
many thanks! :)

What an awesome fountain!
My favorite is the one of the father and that beautiful glow you caught in the glass windows behind him.
I wonder if this is lit at night. I suspect it is and it would be gorgeous.

What an interesting fountain. You've captured it in such beautiful soft light. I'll have to look for this next time I'm in Seattle. Thanks for visiting my WW post...