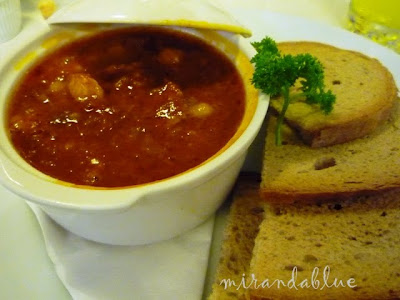 Because ox tripe usually requires a lot of cleaning and long, slow cooking, I seldom cook Callos at home. The few times I cooked Callos, it was a big hit (except for my mother who loves to critique my cooking :P). My favorite Callos is at Casa Armas. More than a decade ago when Casa Armas first opened in Ermita, we would brave the terrible traffic to get there just to eat Callos. This Callos, however, is not from Casa Armas but from Almon Marina, one of my favorite stops at Megamall. This was my dinner the other night when I was in the mall to pay some bills and it rained, and I forgot to bring an umbrella.
Callos is a quintessential Spanish dish, a rich stew of ox tripe flavored with chorizo de bilbao, white wine, ham, and olives. I love to pair this dish with crusty bread.

have read so much about this dish but haven't had the chance to eat one, yet...

thanks for playing again, LM
and for changing the link. :)

enjoy the rest of the week!
ps. my condolence to you and to your family...

wow! another new for me, but I do love Ox tripe,I always use it for Kare-kare.
FoodTripFriday

My Castle in Spain said...

oh i love callos ! i actually discovered this dish since i live in Spain...

i wanted to give you a big thank you for your kind words of support :-)

this would be the first time i'd hear about this dish. i think i'll google it and make it at home some day. it looks hearty and good choice for rainy day.

the dad of a friend cooks delicious callos and we love it! :)

Callos at Casa Armas is truly the best. Moms are like that... They are our worst critic but also the best. Looks yummy.
Happy Weekend!


I would like to take this opportunity to invite you on Monday as I launch my new photo blog with a new meme.

The problem with restaurants in a mall...they still have the mall feeling...
I guess the restaurant in Ermita had a better admosphere to eat callos!

hmmm...i should try this one.i like the way you photographed it. looks yummy.

My husband would love it!

yummy, ako din I love callos pero I pair it with lots and lots of steaming rice *grins*.

Yum! Thanks for this. We should try Callos at Casa Armas then. My husband has been looking for a good callos. :)

haven't tried cooking anything close to this yet. mukhang masarap talaga. :)

I haven't been to Casa Armas and I would definitely order their Callos when we go there. Thanks for the visit ; )

Hi Luna... Callos is one dish that I haven't had in more than 10 years! My mom cooks a mean callos but she rarely makes it nowadays... Perhaps a trip to Casa Armas should be included in my itinerary the next time I go home. Thanks for sharing. Btw, how's your Fritz?

Hi, Streisaat! Fritz is doing great...sweet as ever. I'm missing him right now (spending the long weekend in Subic).

You should try callos at Casa Armas, it's a dish Ilonggos love.

I love callos and minus the tripe, hehehe!

i hope i can try that too

That's my husband's favorite in Almon Marina. :) Quite hard to find callos nowadays.