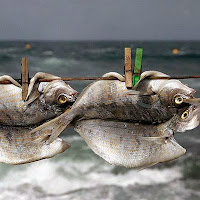 After the weekend, Monday mornings are always a reminder that it's another week of keeping my nose to the grindstone. I'm always zombie-like on Monday mornings. This morning was cloudy, and that kept me in bed for another 20 minutes. Remember that Carpenters' song, "talking to myself and feeling low/sometimes I’d like to quit/nothing ever seems to fit/walking around, nothing to do but frown/rainy days on Mondays always get me down". This song perfectly describes my Monday blues. Nothing is really wrong, feeling like I don't belong...
Anyway, nothing meaningful and earth-shaking happened to me during the long weekend. The weekend was marked by a series of uneventful yet pleasant episodes in a life of a single woman with nothing else to do. Out of boredom, I secretly wished for a week-long coup d'etat! Unfortunately, tear gas was enough to make the coup plotters surrender, so I resigned myself to the doldrums of a long weekend. Sigh!
Friday

I planned of going to Liwasang Bonifacio last Friday to witness the celebration of Andres Bonifacio's 144th birthday. But I got stuck in front of the television watching commentaries on Trillanes’ recent misadventure at the Manila Pen. By late Friday afternoon, my friends called from Greenbelt inviting me to have coffee with them. After dinner at Capricciosa, we explored the newly-opened Greenbelt 5 while debating on which movie to watch---my friends wanted to see One More Chance (giggles), I wanted to see The Namesake. I was out-voted! Fortunately [for me], One More Chance was not being shown at Greenbelt 3 (yeheyyyy!) and we were too lazy to walk to Glorietta.

The Namesake is based on a novel of the same title written by Jhumpa Lahiri. I came upon this novel early this year when I was grounded at the Minneapolis airport on my way to San Francisco. Our plane returned to the terminal 15 minutes after take off after we complained of an unpleasant odor inside the plane---it smelled like a combination of daing and smelly feet! It turned out, there was some problem with the plane’s air-conditioning system. The flight was delayed for almost 4 hours!

With nothing else to do, I looked for a bookstore thinking of Jhumpa Lahiri’s Interpreter of Maladies (a Pulitzer-prize winning debut). Interpreter, however, was out of stock…so I bought The Namesake. And I’m glad I did.

Gogol Ganguli, an American-born son of Indian immigrants, was afflicted from birth with a name that is neither Indian nor American. He is given a name by his father, who before coming to America to study at MIT, was almost killed in a train accident in India. Ashoke, the father, was holding on to pages of Nikolai Gogol’s book when rescuers found him. The story of Gogol and his family kept me busy and entertained till I landed in Manila. I cried my eyes out on the plane while reading this novel that the old guy across the aisle was giving me sympathetic looks, and the flight attendant served me an extra scoop of ice cream.

The movie also sent me to tears (I pretended to wipe my nose!). I could relate to Ashima’s (Gogol’s mother) loneliness in a foreign land, away from her family and anything familiar.

I was supposed to go to the supermarket in the morning but I was too lazy. Spending the whole Saturday morning in bed listening to the radio was a pleasant exercise. I had a late lunch then went back to bed for a nap and by 3:30 pm, I was driving towards Mandarin Hotel to check out the Annual Wiredstate Hi-Fi Show. But the line to the parking lot was very long; I drove around once, and then decided to go to MoA instead. I was planning to see SM Science Discovery Center in preparation to my nephews Xmas vacation in 2 weeks. But the Science Discovery Center was full of school children---the reason for 10 or so buses at the parking lot.

By dinner time, I was at Seaside with 3 friends binging on suahe, talaba, crabs and lapu-lapu. We went to the nearby pet shop after dinner and shopped for our dogs’ Santa costume. I also bought cookies and a red shirt for Fritz.

Happy that the curfew was imposed for only 1 night, we drove to Bonifacio High Street to have coffee. The place was packed with people. The midnight breeze was cold we regretted not bringing our jackets.

Catching up on movies/TV series that I missed is usually my Sunday morning activity. Brunch in front of the TV watching Hairspray in my pajamas was the place to be...also feasted on House' Season 4. Then chatted with my land lord about the Trillanes’ disaster while reading the newspapers. A retired soldier and a loyal Binay supporter---you can imagine which side he’s on.

I put an Armik cd on, played with Fritz, and gave him a bath. Made pop corn and began reading Istanbul (by Orhan Pamuk) until it’s time to leave for the supermarket. It was crazy at the mall---I was dizzy with all the people, colors, and movement before my eyes. Christmas songs permeated the air---the merry season is definitely here!

When I woke up this morning, I knew I had the blues. I wonder if there's a medical term for it. I'm just tired of feeling this way on Monday mornings. Just when you're getting used to the weekend---it's over!

The long weekend produced a languor in my soul I feel that I have been sleep-walking the whole day. I decided to write this blog while having coffee to get my brains into mental aerobics. My blood is just warming up...
Posted by Unknown at 3:30 PM

Now that wasn't such a bad weekend you had. Sometimes we need to avoid making plans and enjoy spontaneous activities more often.

I know...life is great [without PMS]! hahahaha I agree though that being spontaneous is much more fun.