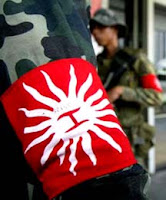 Pardon my ignorance but I didn’t know what alibata was. During the Oakwood mutiny in 2005, alibata was emblazoned on the Magdalo soldiers’ armbands but it didn’t stay in my memory bank. I read the word again during the NPC press freedom mural controversy, where Bonifacio, depicted as a cigarette vendor, had a tattoo on his arm---an alibata---which was replaced with a heart pierced with an arrow in the altered version. I got curious what this alibata is all about.

Alibata is a script that first represented the ancient Filipino language and writing system before the Spanish came. The origin of the script has not yet been ascertained---some believe it came from India, or Celebes. It was used around AD 1000-1200, and was extinct by the late 18th century. Only two forms of the indigenous scripts survive today: the script used by the Tagbanwa of Palawan, and by the Mangyan of Mindoro.
The term alibata was coined inexplicably to mimic the first two letters of the alphabet of the Maguindanao, used in the southern Philippines, which is derived from Arabic. (The term refers to the first two letters, alif and bet.) It is also called baybayin, which means "to spell" in Tagalog.
Reading about alibata, I stumbled into Hector Santos’ A Philippine Leaf where he wrote about the Laguna Copperplate Inscription. An 8 x 12 inches copperplate inscribed with a mysterious script found along the shores of Laguna de Bay in 1989. The object gives a precise date from the Sanskrit calendar which dates back to 900 AD. This is 621 years earlier from the first observations recorded by Pigafetta in 1521.

Why does the world consider China, Japan, and Thailand as countries that have a tradition of writing and assume that the Philippines owe its literacy to the Spanish? It is because these countries use their own writing systems while Filipinos read and write in the Latin alphabet. Although outsiders may be forgiven for such a belief, many Filipinos unfortunately also do not know that a writing system was in place in the Philippines long before the Spaniards arrived.
Pedro Chirino, a Jesuit historian, who wrote in his 1604 Relacion de las Islas filipinas,

All these islanders are much given to reading and writing, and there is hardly a man, much less a woman, who does not read and write.

Many other historians had similar conclusions, including Dr. Antonio Morga, Senior Judge Advocate of the High Court of Justice and commander of the ill-fated galleon-turned-warship San Diego that was sunk by the Dutch Admiral van Noort. He wrote in his 1609 Sucesos de las Islas filipinas,

Almost all the natives, both men and women, write in this language. There are very few who do not write it excellently and correctly.

It was a simple and elegant system that was called baybayin or alibata.
Posted by Unknown at 8:12 PM

Hello, Luna. Thanks very much for visiting my site. But you're a fantastic writer yourself! I ought to pay the Philippine blogosphere more attention. This post about alibata is extremely insightful; I've never before known what it was, too. I am glad to have confirmed the notion that Filipinos are more literate than what others think - even before the Spaniards arrived.

I enjoy reading your blogs, Migs…very much so that I’m looking forward to your next post. I’m new to this blog thing and I’m amazed at writers like you---very refreshing.

This is interesting, I remember seeing alibata back in highschool but never learned how to read it...lol. And ouch...I am learning kana and kanji but never our own writing system =( Thanks for sharing!

I don't even remember learning about alibata in high school! hahaha