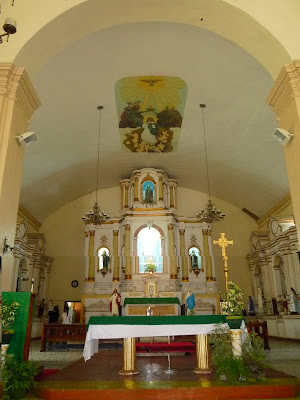 Nuestra Senora de la Asuncion Church in Santa Maria, Ilocos Sur is a historical landmark as well as a UNESCO World Heritage Site.  It stands on top of a hill and we climbed 82 steps to reach the church. 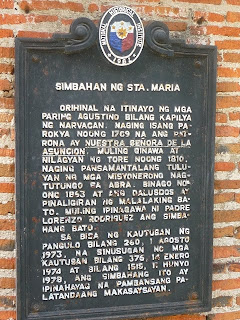 My first visit to this church was more than a decade ago, but it's beauty has never stopped to amaze me.  This church is a great attraction to both the traveler and the faithful---I'm more of a traveler.

Santa Maria Church is not only a reminder of the 377 334 years of Spanish colonization but it's a unique structure built on heavy stones and mortar.  It's not as flamboyant  in scale and less stunning in the facade but I like its simple design, the reddish brick exterior, and the fact that it was built on top of a hill--giving visitors a panoramic view of the town, the green fields and the blue sea in the horizon.

One of the old Baroque churches in the Philippines, the church in Santa Maria was built in 1765.  Thick buttresses were added to re-enforce the structure to protect it from earthquakes.

There were two Requiem masses when we arrived.  We waited for the funeral march to begin before entering the church.  Santa Maria Church is one of the 8 pilgrimage churches in Ilocos Sur.  The town is about 360 kilometers north of Manila. 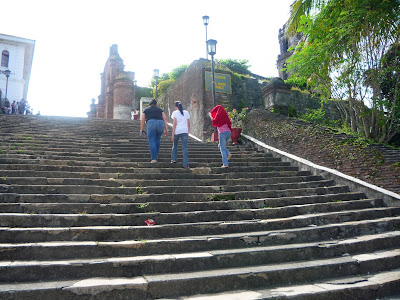 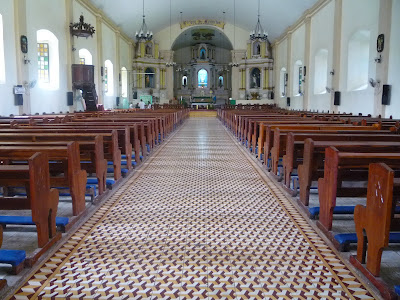 my walk to the altar 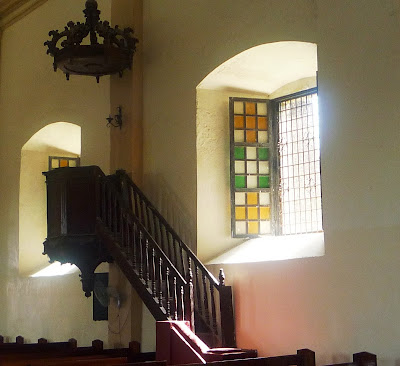 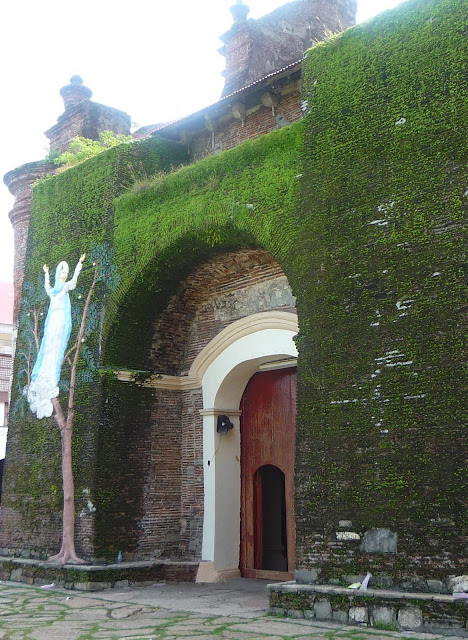 side entrance of the church 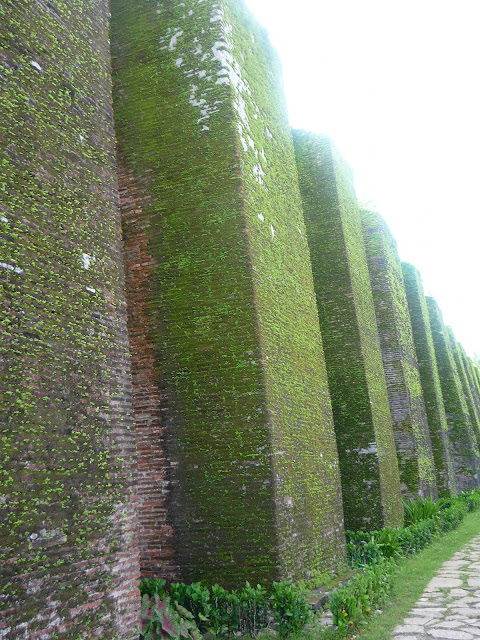 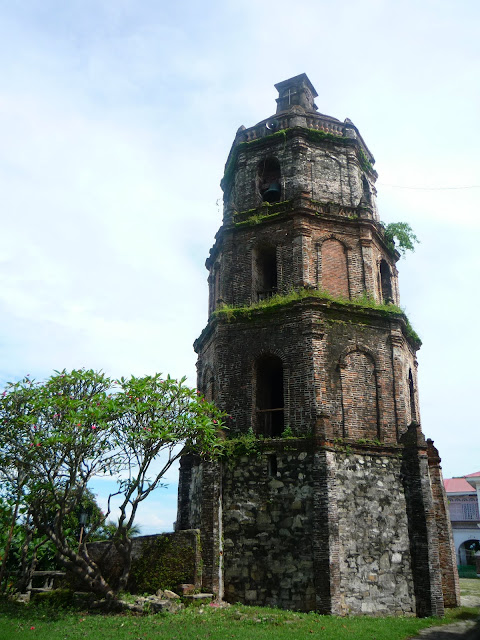 a hexagonal bell tower, built in 1810 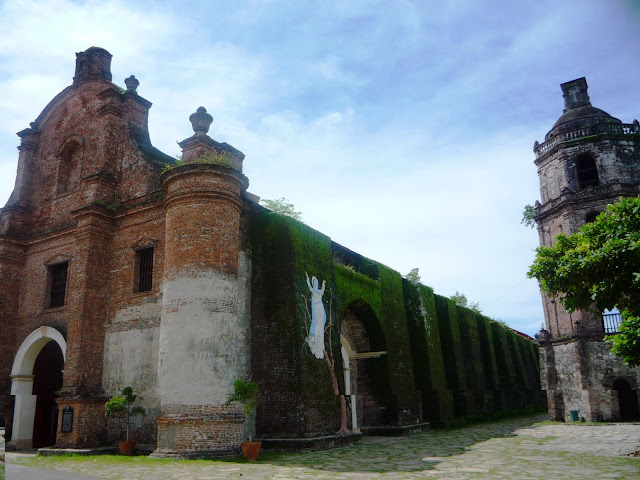 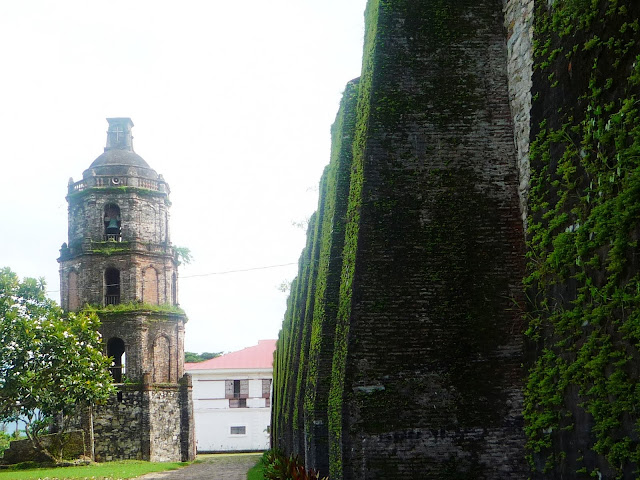 What an incredible and beautiful old cathedral! Your photos are fantastic! Would love to visit there! Hope you have a wonderful week!

It seems to be a beautiful place to visit.

The alter, so gorgeous and the stained glass windows, beautiful. I love the way they are open and I can see the red, green and yellow crosses. Exquisite.

Isn't it beautiful how the moss grows? What a beautiful texture it gives this church. It is breathtaking for sure.

The bell tower is so gorgeous. What a true treasure to behold.

As I am not able to make long walks and especially steps, I am so grateful to you for taking me to this beautiful site this morning. You have SO blessed me sweet friend. Just so beautiful. What a gorgeous blue sky background too.

Many hugs and so much love, Sherry

The architecture is stunning and I love the moss growing on the old stone. The insides of the church are as exquisite as I would imagine they'd be! You COUNTED the steps? I probably would have too.

Whoa! What a church. And what a walk to the altar!

I really love this church. Its lines, its location and its ambience. I've always made it a point to visit this church each time I get to Ilocos. You've done well with its photos. Great!

one of the few remaining heritage churches that i havent visited. i should visit this. very beautiful!

Thank you for sharing this beautiful church with us. It is exquisite.
Kay
Alberta, Canada

Would love to see this church for myself as well. You did a great reporting on this as always.

Impressive and very beautiful church.
You took some great pictures of it... not easy with such big structures.

Wow - those shots of the moss-covered entrance and buttresses are just superb. And the way the light filters through the stained glass window. Just superb!

what a lovely church and the surroundings are exquisitely beautiful.

Well worth the 82 steps!

Such an impressive building must be preserved at all costs. It looks very exquisite inside and very strong and imposing on the outside. Thanks for sharing.

I like the atmosphere there, great shots of the church.

What a beautiful church! Great photos. Thank you for sharing.

These are wonderful pictures, Miranda! I can almost touch the stone and moss on this lovely church where souls seek inspiration. :)