Luneta by night [My World-Tuesday] 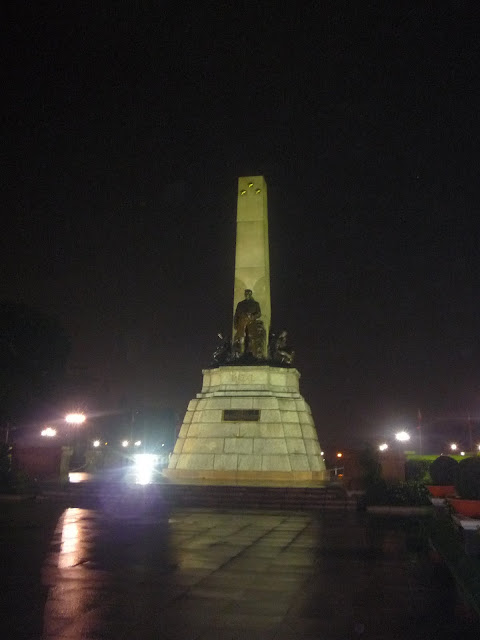 The bronze and granite Rizal monument at Luneta Park is one of the most famous sculptural landmarks in the Philippines, and a major tourist attraction in Manila.  This 48-hectare park was used to be called Bagumbayan (or New Town) during the Spanish regime, then Luneta for the park's half-moon shape.  It was officially renamed Rizal Park as a tribute to Jose Rizal, the national hero, who was executed here on December 30, 1896.  But to most Filipinos, this park is popularly known as Luneta.

Luneta is not my usual weekend destination--for one, it's a bit far from where I live.  For some, visiting Luneta is unglamorous, and most of my friends would  laugh if I'd invite them to visit the Rizal monument.  I don't know if a Parisian would react  in the same manner when asked to visit the Eiffel Tower on a given day.   Many city dwellers consider Luneta as an oasis on hot and humid days and nights, a picnic ground for folks who  prefer open spaces or couldn't afford to go to the malls.  There are gardens, playgrounds, an open-air concert hall, an artists' sanctuary, historical markers, a light-and-sound theater, a grand stadium and fountains in this park.

Ironically, it was raining when we walked around Luneta on Saturday night.  My friend and I pigged out at a restaurant in the nearby Manila Ocean Park, and we decided to walk off the calories in Luneta.

When I took photos of the Rizal monument, I crossed the metal chain  to get a closer shot, then I heard a  persistent whistle.  It was the security guard signaling me to  step out of the perimeter fence.  We asked why there is a perimeter fence when it is a public monument.  The guard explained that people tend to leave their trash near the monument, the perimeter fence also protects the monument from vandals and vagrants.  The Rizal monument is continuously guarded by ceremonial soldiers, known as Knights of Rizal.  It reminded me of a family anecdote about an uncle who had the penchant  to tickle the on-duty ceremonial soldiers when he had one too many. 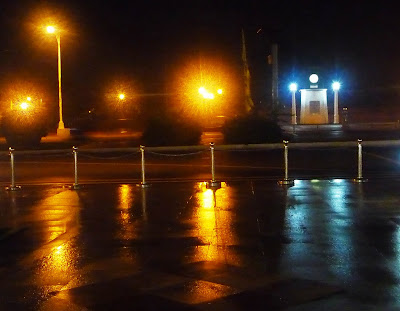 Across the Rizal monument is a marker with a white ball---the Kilometer 0.   Similar to ancient Rome's Milliarium Aureum, Kilometer Zero is the point of origin to all other cities in the Philippines. 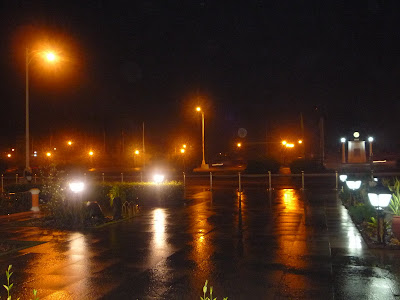 the wet and deserted Roxas Boulevard across Kilometer 0


Rizal Park (or Luneta Park) is at the northern end of Roxas Boulevard, overlooking Manila Bay.  It is a walking distance to the historic Manila Hotel, the National Museum of the Filipino People, the National Library, the neoclassic Department of Tourism building, the Orchidarium and Butterfly Pavilion, the Planetarium, and the walled city of Intramuros.

I promise to revisit the park again soon...at day time, to show you better photos.:p

I remember it wasn't safe back then to loiter in Luneta after dark so I never got to really see it outside of the little peeks when the jeepney whizzed by the park on our way home.

Great shots Luna and hope the week starts great for you.

Thank you for sharing details of this impressive monument. Often a tragic event such as the killing of a hero or soldier fades over time and people come to view commemorative statues as a glorious work of art that should be protected but also accessed freely and enjoyed safely. :)

Oh my, those lights from the lamp posts reflecting are really beautiful. Though I have never seen Rizal Park at night, I was really happy when I first visited during the day.

Marvelous post for the day and I love your photos! The lights are so lovely! And a very beautiful monument! Hope you have a great week!

oh yes. you cant get that close anymore. so a telephoto lens is needed for a close up shot of the monument.

I love your photos, very nice reflections. Good that you didn't let the rain deter you. Sounds like a nice place with lots to see.

Lovely reflections from the street lights.

what a beautiful monument and beautiful night shots Luna.

Thank you for sharing these beautiful night photos

Thank you for sharing these photos and for the information about the monument. In Rotterdam we have the statue by Zadkin, which is a cry to heaven of a man whose heart is ripped away by the bombardment in May 1940. So we have warmemorials for the Dutch in the Netherlands and for the Dutch who lived in Indonesia during the war.

Did I tell you in high school, I studied the History of Dr Rizel.

thanks for this post, learned a few things about Luneta, hehe.

Somehow the Rizal monument looks more enchanting with the lights at night. How sad that we need to protect a national landmark from vandals. Nice capture despite the rain.

Beautiful snapshots. It's sad to know that some show little respect to this park & view it "unglamorous". Oh, well.

I have been here a long time ago & enjoyed walking along Luneta. I would go back & visit someday too. :)

great shots with the lights reflecting in the rain-washed pavement.

I really like it that this place has been maintained. For sure, it needs sprucing up more. I was able to visit it a few years back and I really surprised that there were a lot of people considering it was a working day. Nice captures! have a good week!

My world is here.