My introduction to Middle Eastern food was very recent. After a Fear Factor-ish experience at an Indian restaurant during my "impressionable years", I made up my mind that Middle Eastern food and flavors were too "strange" for my taste. My Middle Eastern culinary experience consisted of kebab and shawarma, and I was OK with that. Until about two years ago when I had to take a Middle Eastern client to dinner. I had zero knowledge on Arabic cuisine so you can imagine my anxiety when the client invited me to dinner at an Arabic restaurant one night. He sensed my apprehension when I told him that I've never been to an Arabic restaurant before, and I didn't know any good ones in Manila. Good thing I called a friend on a hunch, and was directed to Hossein's in Serendra. The client asked if Hossein's serves "halal" food---"ha" what (haha)? Because he speaks unintelligible English, and I don't speak Arabic, I asked the restaurant manager to explain to me what "halal" means. And he did, more or less (he's also Middle Eastern but speaks with a Tagalog accent).:P

Halal is an Arabic word designating any object or an action which is acceptable to Islamic Law. Islam has laws regarding which foods can and cannot be eaten, and also on the proper method of slaughtering an animal for consumption. And yes, Hossein's serves halal food. Dinner was a learning experience that night, and the client relished on educating me about Middle Eastern food and about Islam. And yes, oh yes---I enjoyed every bite! Loved the rich flavors, I almost licked my fingers!

Nowadays, whenever I get a chance, I try small Middle Eastern dishes here and there to educate my palate. I had this Beef Biryani recently at Persian Grill in Megamall. 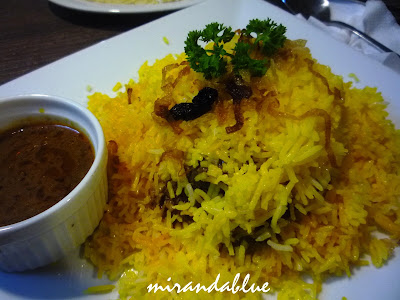 Beef Biryani is a rice-based dish brought to India by Persian travelers and merchants. It's made with spices, rice (usually basmati) and meat or vegetables. We are used to meat or fish toppings---meat over rice, but with Biryani, rice covers the meat...it's beef with rice topping. And the beef cuts beneath the saffron-seasoned rice were incredibly delicious! Served with Biryani was a dip called Mirchi ka Salan---a chili and peanut curry, the flavor was rich, tangy and spicy and simply yummy!

Basmati rice is a variety of long grain, fragrant rice. When cooked, it's free flowing, not sticky and has a pandan-like aroma and flavor. The rich golden-yellow color comes from saffron, a spice locally known as "kasubha". For decades, saffron, a seasoning and coloring agent, is the world's most expensive spice by weight.

For me, discovering new tastes and flavors is like learning a new language, or visiting a new place. It opens new doors for adventure and learning. 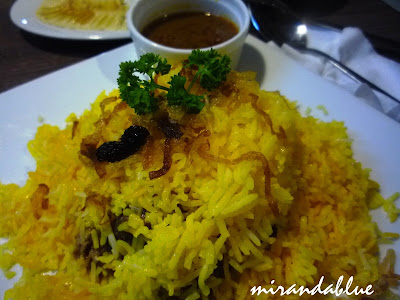 I never tried Arabic food before, but yes, I do notice that most of their specialty store here mentioned the word "halal" and I got curious what it means, until I found out that, aside from what you mentioned, it was also a meat that they offer a prayer first before killing or cutting.
When I last visited our country, I'm so happy to see all different restaurant offering international cuisine. :)

The Basmati rice when eaten and cooked plainly is deliciously and I've also tasted the Biryani rice, I did like it too infact one of my faves at the Fil-India Resto here in town.

Our Adventures Together/
Her and History
Tasty Exploration

i agree with you regarding trying out new flavors/dishes ... it's like dipping into a different culture all of a sudden. :)

thanks for playing again, LM
enjoy the rest of the week!

Interesting food. Never tried it yet and I would like to one day :)

Halal yata is like kosher to the Jews, tama ba?

haven't tried beef biryani yet but your post got me curious.

By the way, what's the title (and who's the singer) of the song that's playing here? I love it! :)

I also love trying different dishes all over and one of my fave is tasting a biryani rice.I have an friend when I was still working here and cooked for us--nagkamay pa nga kami eh lol!!I love their spicy foods!!^_^

Thanks for dropping by!!
aawww!!Is Fritz your pet?He's a cutie!!^_^

the picture looks so yummy... this is a good dish to try

I have never really tried much Middle Eastern food, but this looks good.

hmmm sumthing worth trying for

Ive seen different kind of foods in todays FTF. This one looks yummy, though I cant see any meat in there but the mixture of rice and other stuff look delish. I wish i can try this one day. Happy FTF.

Id definitely love this dish, Luna! Having an indian boyfriend made me able taste lavish indian dishes when vacationing together. :D but in some dishes, just can't stand the spicy taste more than my tongue can contain. hehehee.

Only this year that I've really appreciated biryanis. I still prefer the one with chicken.

i've tried all the certified Halal restaurant here in Manila being a Muslim myself wherever we visit Phils. Hossein's & Ziggorat are too expensive for traveller's like me & my family so we often go to Persian Grill's @ Legaspi St. Legaspi Village. it's very affordable & the foods are sooo yummy, Lamb biryani together with mango lassi are one of my faves.