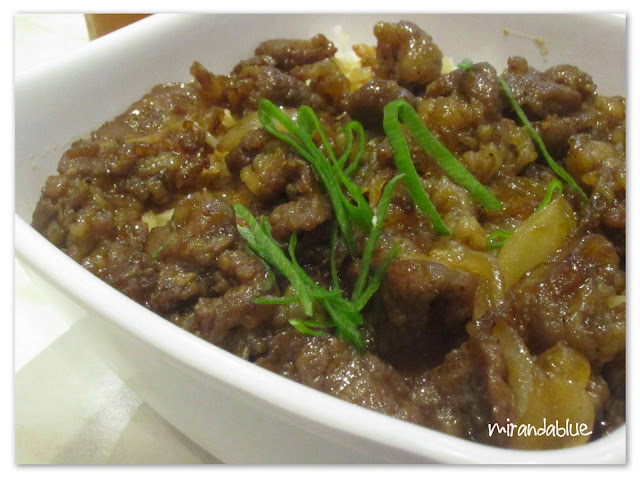 I was 10 minutes away from home when a heavy downpour, courtesy of Mang Gorio, brought the late afternoon traffic to a crawl.  Luckily, I was just a few meters away from the mall, and I decided to take shelter instead of wasting gas and sitting in traffic.  I haven't been to a newly opened BonChon Chicken branch here and although I'm not that crazy about their chicken, I'd like to try their other dishes.

I got Beef Bulgogi with rice, and extra beef for an additional forty pesos, and ChapChae, a traditional Korean noodle dish (which I had bagged for take-away, hence, no photo.:p).  ChapChae is made of black glass noodles (bigger than sotanghon), flavored with sesame oil, thinly sliced vegetables--I couldn't remember if there was meat, and garnished with sliced scrambled egg and sesame seeds. It was a bit too oily but tasty.  I'd definitely order it again.

I also enjoyed the flavors of this Beef Bulgogi (Korean pronunciation:  pulgogi), but some slices of meat were not as tender.  Bulgogi is one of the most popular Korean grilled dishes made from thin slices of marinated sirloin.  Bulgogi was listed at no. 23 on CNN's Your Pick: World's 50 best foods.

Both are on top of my favorite dishes ever! Gaaah, I'm getting hungry again (just had lunch).

Not keen on Korean cuisine but I learned a new dish today, thanks. So that's it - I'm going to try beef bulgogi.

appreciate much your taking the time to share and link over at Food Friday, LM