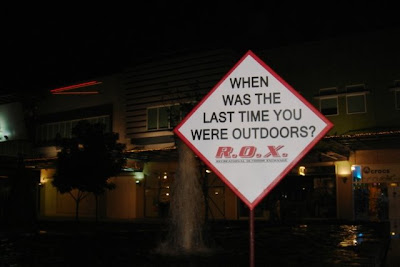 A friend invited me to join an early dinner with her former office mates last Saturday, and I was surprised to hear them talking about their office Christmas Party next week. Yes, you read it right---a Christmas Party in January! December was a busy month for them that they didn't have time to organize an office party. We chatted over coffee until half past 2 in the morning and they were still receiving work-related calls---from 8 pm until 2 am! The girls told me that they couldn't even enjoy their vacation because their Korean bosses wouldn't approve it. I was troubled and shocked that these women who work hard until late every day, get calls about work at 2 am, couldn't even have a decent vacation! That's horrible!

We work long hours in our industry so all the more reason to respect each others personal time. I believe it's a matter of "educating" the people we work with that our time after work is our own. I used to read business emails even when I'm on vacation, call suppliers when there were problems---in essence, I was working while on vacation. Then I realize that I should take my personal time seriously because it's my time to de-stress and experience down time. Remember---we teach others how to treat us through our own actions. For the past year, I have been able to establish healthy boundaries that separate my work and personal time.

Mobile phones certainly reduce our private time. I used to receive work-related calls while watching a movie, having dinner, or sleeping even. And I'm not a surgeon! Then I learned the wonderful features called "call divert", "voice mail" and "caller ID". Divert work-related calls to a voice mail after office hours---you can decide if it's an urgent matter for you. Someone else lack of planning does not make a matter your emergency.

We all need time away from work even for just a few hours...so make sure you take back control of your personal time. Use your unplugged time to connect with your family, your friends, or spend some much needed time on you---not to do laundry, spring cleaning, run errands, or other have-to's.
Posted by Unknown at 12:15 PM

i totally agree with you. i worked super overtime din dati, then realized i was working too hard. and nasanay yung mga boss ko to the point that they would have me picked up from my house at 2AM!...we all need some "me" time.

wow! a christmas party is a christmas party but then...if it's because of working your butt out while the holidays are on---parang unfair talaga! And we often be teased or tease workaholics but it's really just wanting to get things done well and on time! So goes what you call "a small global world"---halo-halu na ang time zones, attitudes towards work etc. na hindi rin naman likas na Pinoy. We're the fun people of the world!

ok lang yon, Reena, to have a late Christmas get-together with friends. during the holidays, we're all busy with family activities that we sometimes put our friends at the bottom of the list. my friend's former office mates, however, worked during the holidays, and while everybody's partying, they were working. lungkot naman di ba?

I used to work for a company who had its Christmas parties in March every year. It was called the "Better-Late-Than-Never Christmas Party". :D The reason for this was that it was much cheaper to have the party in March than during the busy and pricey holiday season. The parties were still very enjoyable though. :)

I enjoy working for my current boss because he respects his people's personal time. In the years that I've worked for him, I can only count with the fingers of one hand the number of times he called me either in the evening or over a weekend. I appreciate that in him.

In contrast, I had worked for a lady who showed no such respect for personal time. I was depressed a lot during that time because she made people's work life a living hell.

i imagine any party, as long as the company is paying for it, would be fun!:D a Christmas party in march is new to me...it's alright as long as the bonuses were handed out in December (haha).

bosses like the lady you used to work for are usually miserable people---naghahanap lang ng damay! i had a boss years ago who thought his staff were his personal slaves. i'm so glad there's justice in the universe!:D