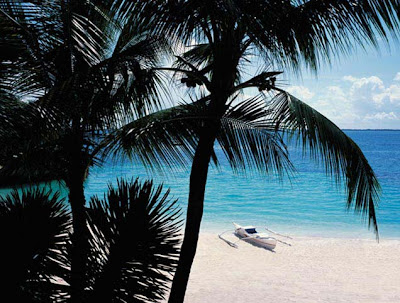 beach at Mactan Shangri-La
My trip to Cebu last week was interesting. The client from the Middle East was fascinated with the designs he saw in the booths as well as the factories I brought him to. But the Cebu X has gotten smaller this year. A lot of furniture exporters in Cebu has closed shop because they couldn’t compete with China prices. The depreciating US dollar has not also helped the export industry. It’s sad that the old, lively Cebu market is now wilting.

The client was also captivated with the lush Mactan Shangri-La. I booked him at the hotel’s spa on his second night, and he couldn’t stop talking about it the next day. He was delighted with our dinner of lobster, crabs, prawns, and oysters at the Cowrie Grill, Shangri-La’s beach-front restaurant.

We were at a factory one afternoon, selecting furniture, when the client asked me where the west is. For a minute, I wondered at the question---then he asked for a fabric he could use to kneel down to pray. It suddenly dawned on me that Muslims pray a couple of times a day. I couldn’t find a fabric or a carpet, so he asked for a folded carton instead. He doesn’t smoke or drink alcohol, and we talked about Islam and Christianity while stuck in Cebu traffic, about terrorism, and the wars in Iraq and Afghanistan.
I also got two offers that day. The client offered to double my pay if I'd work for him in the Middle East. Then the Italian guy who owns the furniture factory suggested that I relocate to Cebu since I'm single, and stay at his 3-bedroom condo, rent-free. Yeah, right! Rent-free, indeed!

What surprised me was the client's interest in girlie shows! Frankly, I am not that naïve to be surprised anymore…but after seeing him pray a couple of times a day, I find his interest a bit strange. Oh well…he’s only a man after all! I’ve been going to Cebu regularly for the past 9 years but I’ve never been to a girlie bar there. I called a couple of my Cebu vendors and was advised to bring him to Jaguar or Arena, both class A bars, or to Gold Fingers for some raunchy dancing, or to the Silver Dollar in Jones where the Australian tourists go, said to be the wildest of them all.

More than a decade ago, our American clients would ask me to take them to Firehouse in Ermita, or at the Hobbit House. I would leave them there and go home, the driver would take them back to the hotel. And some of our auditors and IT persons from Hong Kong would shyly ask about girlie bars in Timog or Pasay. My male colleagues would take them, and I usually stayed out of it. But with nobody to turn to in Cebu, I brought the client to Jaguar, Gold Fingers and Silver Dollar in a span of 3 hours, feigned nonchalance and drank beer in-front of gyrating bodies of young Cebuanas.

By midnight, I brought the client back to Shangri-la, returned to my hotel and took a very long shower.
Posted by Unknown at 4:22 PM

So you had a wonderful trip...Lovely reading about your experience...we can learn about so many cultures, customs & tradition while travelling to different places & it also teaches us so many things and after travelling a lot our mind also craves to learn and experience new things with ease...have a wonderful time!

I miss Mactan Shangri-la. It's been close to two years since my last trip there.
Peace and quiet without the extra long drive from the city center ...

Globalization can indeed be crippling. The trick is to find the next niche or to find a way to reinvent and compete in response to market realities.
This is where governments really show their mettle - in being able to steer local economies through the maze of world competition to effect a flourishing groundswell of commerce. But if the government is otherwise preoccupied with their own "pocket industries" ...

Hobbit House in Ermita still exists, though in a new location. I caught Freddie Aguilar there still singing "Anak".

Men and girlie bars is like women and shopping malls. Nothing necessarily irreverent - it's just the way we are wired :-)

Wow, did you reject the offers? =D I find your job amusing and also a bit (whaaat?) haha...I mean the part where you have to look for girlie bars hehe...

Just telling what you ate makes me want to go at that very lovely and clear blue water shores!

I wanted to warn you in your previous post but then I found it would be unfair to the people of the Middle East... I don't like to generalize and put people in particular boxes...

He must be a good client of yours... Shangri-La, lobster dinner, girly bars...

How much furnitures do I need to order from you to get the same treatment? ;-)

Hi, Sidney! I thought that he would be curious at the local night-life but I didn't expect him to ask me to bring him to those bars. He's a new client, and he paid for his stay at the Shangri-La.:D I have a budget for one nice dinner for every client, but he insisted to pay...so I let him! hahahaha He also paid for the girly bars---there's no way I could ask my boss to reimburse me on that!:D

I can't imagine myself working/ living in the Middle East. Too much freedom here---I'd probably come home in a straitjacket! hahahaha

Hayyy, Gizelle...the things we do for clients! I had a client once who asked me to take her to a fortune-teller. We drove to Madam Auring's parlor near UST...it was raining and Espana was flooded. She got impatient and decided to walk to the parlor. Guess what happened---she fell into an open man-hole! I was running behind her and froze when she fell. About 5 students pulled her out. She was a big-busted lady and that saved her! :D She broke a rib, though.:(

Mactac Shangri-La is a slice of heaven...I hope you'd be able to bring your family there someday.

Hi, Dagul! I understand how you guys are wired, and I didn't think badly of him because he wanted to see girls dancing naked.:D I guess I was just disconcerted at his seeemingly devoutness and diversion to girlie bars.

You said it---the government is busy with their own "pocket industries" that the SME's are left to fend for themselves---the SME's who provide jobs at the grassroots level. China is evolving...soon, our production problems would be there's too. Let's hope that our SME's would benefit from China's economic reforms. Matira na lang ang matibay!:D

Hobbit House was our expats' favorite hangout, second to Firehouse.:D

No, I didn't reject the offers, Gizelle. I just smiled and get on with what I was doing.:D

Thank you, flyingstars. The experience taught me a lesson or two. I realized that people have so much in common despite the differences in religion, culture, traditions, etc. We are all basically the same. I guess that's a good thing.:D

Just curious...where there other women watching the girlie shows? I've seen them here on occasion, accompanied by their male friends or whatever...but like me, they are only there for the drinks LOL.

Hi, bertn! I didn't notice other women watching the shows. A female colleague accompanied me and the client---and we were asked if we're 'together'. My colleague laughed and told the manager we're not lesbians. Then the manager said, Ah, so he's your husband! To which I replied--- Hindi, magiging husband pa lang! hahahaha

Lol at the manhole story wahahahaha....good thing she wasn't carried away to the end of the tunnel =D

I'd surely wanna go there but as of now, hubby plans to stay here, he doesnt want to visit Pinas, if we go on vacation, just somewhere near....waaahhhhhhh...

Hi, pusa! if you'd like the experience , there are decent (for lack of a better word) strip clubs in metro manila. we got home in one-piece, so it was ok.:D

I literally bit my tongue when i saw her being pulled out from the man-hole, Gzel. Yeah, it was a good thing we didn't have to fish her out of the Pasig River...do'n daw ang end ng man-hole na yon!:D

Well, be patient...who knows, your hubby might change his mind someday soon.:D