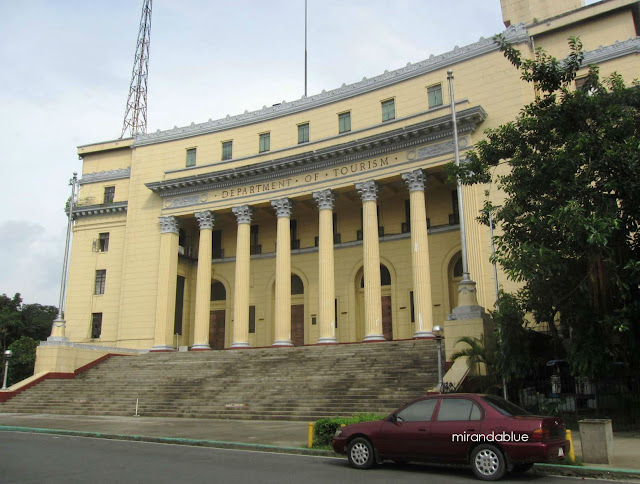 The Department of Tourism (formerly Agriculture Building) headquarters in the southern section of Rizal Park in Manila.  I recognize the Corinthian columns (thanks to the designers I have worked with.:p)---an example of neoclassical architecture; designed by Architect Antonio Toledo and was built in the early 1900's.  The DOT building is the future address of the Museum of Natural Sciences. 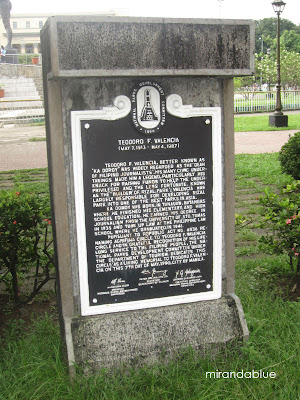 "Teodoro F. Valencia, better known as "Ka Doroy," was widely regarded as the Dean of Filipino Journalists. His many civic undertakings made him a legend, particularly his knack for raising funds to help the underprivileged and the less fortunate. Known as the "Builder of Rizal Park," Valencia was largely responsible for developing Rizal Park into one of the best parks in Asia.

Ka Doroy was born in Tanauan, Batangas where he finished his elementary and high school education. He earned his degree in Journalism from the University of Sto. Tomas in 1935 and took up Law at the Philippine Law School where he graduated in 1941.

Pursuant to Republic Act 6836 renaming Agrifina Circle to Teodoro F. Valencia Circle and in grateful recognition of his life-long service to the Filipino people, the National Parks Development Committee under the Department of Tourism, dedicates this circle as a living memorial to Teodoro F. Valencia on this 7th day of May 1990. City of Manila."

It is a pretty building, I like the columns and color. Thanks for sharing your world. Have a great week!

It's attractive architecture to be sure.

A lovely old building and good to see it still in use and in great shape! Hope you have a good week!

A very dominant building. One not to be missed.

What a magnificent building!

Wonderful information. Many of which I am not aware of. Thanks for sharing. :)

Thanks Luna, i didn't know it has been an Agriculture building in the past.

About the orchid show, i replied in my site, but you might not see it there. You should not wait for the weekend to see the exhibit. Flowers are at their best a day or 2 after the opening day, might not be goo at the last day. The only good thing about the last day is the cheaper price of plants at the commercial booths.

Lovely capture. This looks like a treasure of a building. Love all the detail and the beautiful columns.genie

Graceful building! It looks like an ancient shrine or temple. It is great the building has been used as the DOT, being preserved very well.
Have a wonderful week.
keiko