Kayangan Lake: A journey to paradise 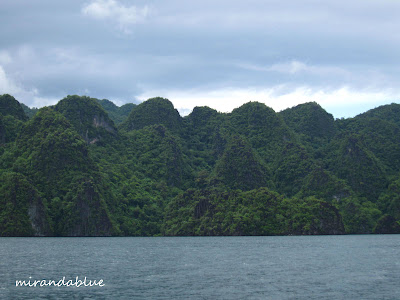 From a distance, Coron Island is a massive and unbroken limestone wall of sheer precipices that juts out from the sea.  Up close, lush stunted forest vegetation, so resilient that they are able to grow on pure rock, cover the craggy cliffs of the island.
On a cloudy morning, we traveled to Coron Island to see the famous Kayangan Lake, one of the seven mountain lakes in the island.   Out of the seven lakes, only Kayangan and Barracuda lakes are open to the public.  It took our outrigger boat less than 30 minutes to reach the island from Coron town harbor in the nearby Busuanga Island. 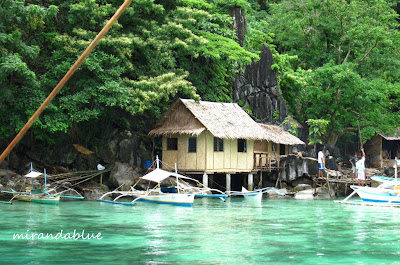 Coron Island is an ancestral territory of the Tagbanua, one of the oldest tribes in the Philippines.  Visitors must pay an entrance fee of P200 (or less than $5) per person.  Funds go to the Tagbanua Foundation that supports community projects such as medical assistance for the elderly and scholarship for Tagbanua children. 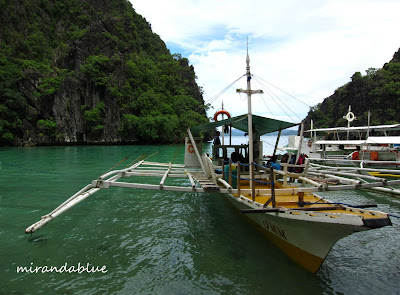 This was the outrigger boat that brought us to the island.
We stopped to read the sign---the rules are listed here. 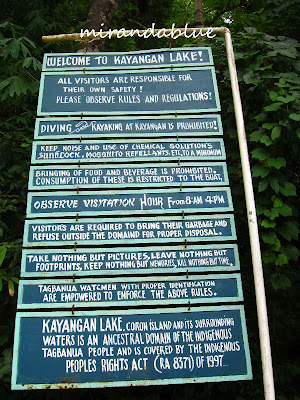 The steep ascent and descent to the lake are ideal for trail hikers---I'm not one of them though.  So imagine me almost running out of oxygen on the way up and down the steps.  This was my --th stop in the guise of taking photos. 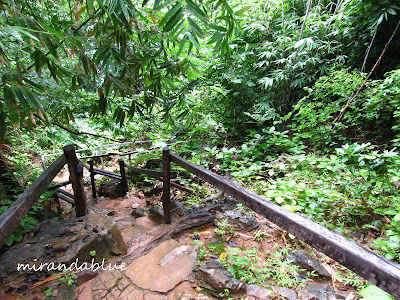 It had been raining and the rocks that formed the steps were slippery, the wood railings helped me a lot.  After an arduous climb, we were rewarded with this spectacular view of Coron Bay and the most photographed channel entrance to Coron Island. 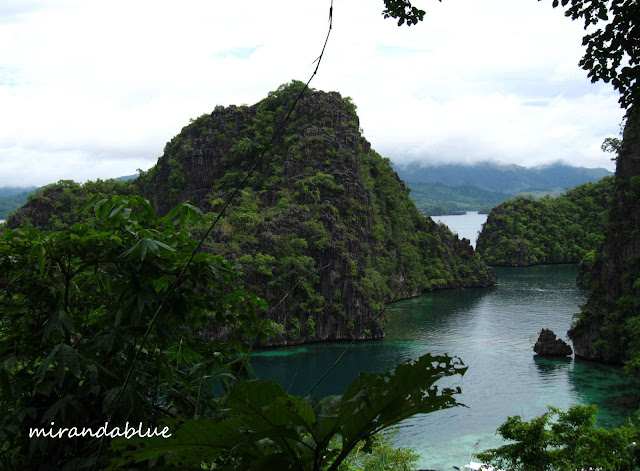 From this viewpoint of 250 feet above sea level, we started our descent to Kayangan Lake.  The lake is a Hall of Fame awardee for the "cleanest and greenest inland body of water".
Enclosed by high limestone karsts, this splendid awuyuk (lake) is held sacred by tribal folks. The Tagbanua believe the panya'in (hostile spirits) dwell in the lakes so they seek the advice of a babailan (shaman) before they go to the limestone walls of the lake to search for balinsasayao (Collocalia troglodytes) nests. 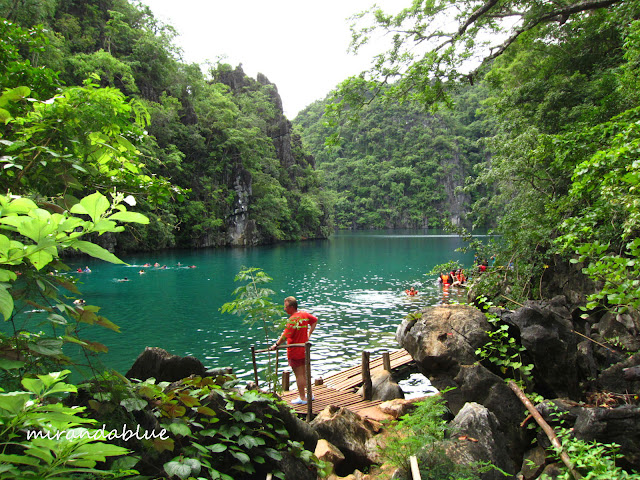 The water was warm and a bit salty, according to my sister.  And the emerald water was so  clear that breathtaking stalagmite formations underwater and schools of fish were visible from where I sat.  There were no corals underwater, only rock formations. 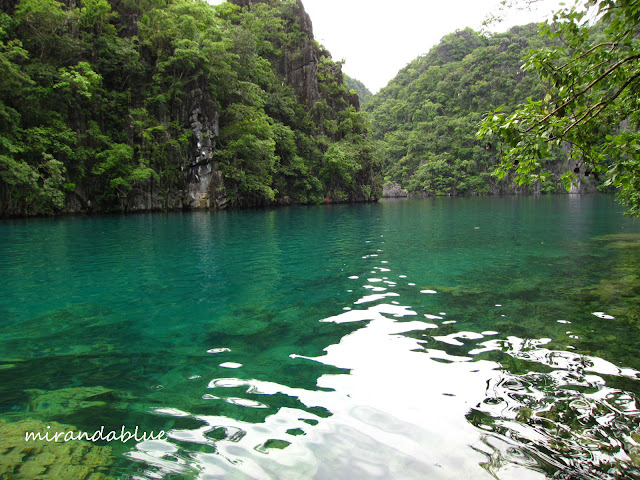 I only soaked for a little while then stayed on a shady spot under the overhanging  branches.  This place is undeniably beautiful, but lakes spook me...images of Loch Ness monster  and undiscovered life forms crossed my mind.  Lakes are  mysterious--I wonder what forces of nature created them.
I admire this boy's courage--the dark crevices under the rocks creep me out. 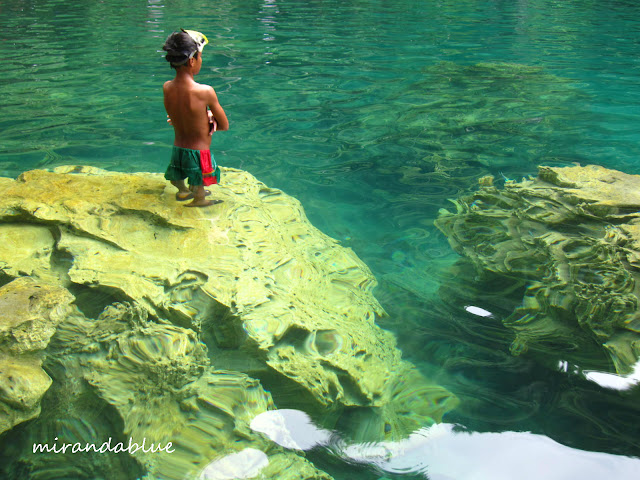 Swimming with the fishes...some even bit my legs!  They probably wanted me to swim with them, too.  Sorry, guys.  Our guide assured me there were no big fish in this lake, only the greenish elongated fish that resembles dilis (anchovies) were found here. 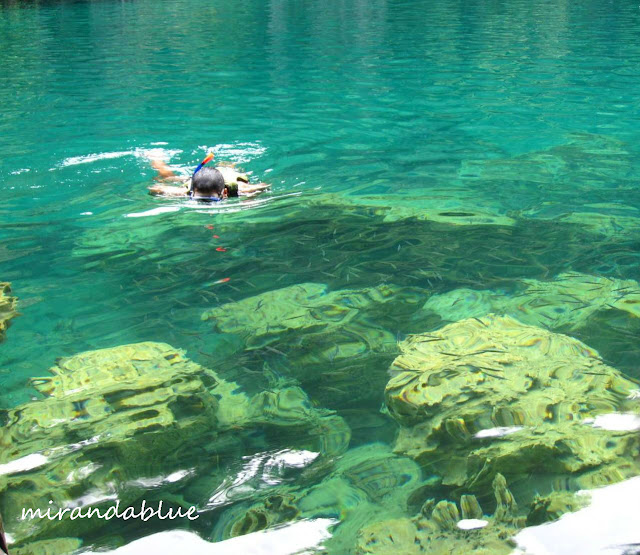 And here's my little sister---she's fearless and tireless!  She snorkeled all over the lake, even attempted to get into a cave on the other side. 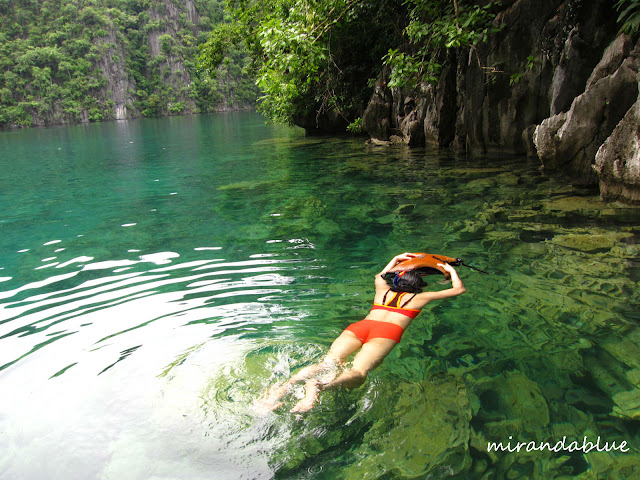 We stayed the whole blissful morning in Kayangan Lake...it was serene, an amazing experience.  Thanks to the Tagbanua for taking care of this place and sharing a piece of paradise with us.

Wow, what a beautiful place to visit. the scenery and water looks gorgeous. My hubby would love to snorkel there. Thanks for sharing your world.

How beautiful, it looks like paradise! I would love to snorkel there. Your photos are breathtakingly beautiful.
I'm so happy to meet you.

What a beautiful place to snorkel. I can just imagine the colorful fish to be seen. So breathtaking!...Christine

Wonderful look at a beautiful place. I'd love to be able to explore there.

What an incredible, breathtaking place! A dream world! And your captures are superb as are the colors everywhere! Wow! Absolutely gorgeous! Thanks for sharing this incredible part of the world! Hope you have a lovely week ahead!

so beautiful. unparalleled grandeur. so worth all the puffing climbing up to see that sight.

A paradise worth preserving! I love it that you stopped to take photos whenever you needed to catch your breath. Very smart. ;))

Wow! Grand experience! I like the little stories associated with places, they make it more special.

What breathtaking scenery! I am glad that the money goes towards the people and not some corporation.

What crystal clear water and breathtaking scenery. What a wonderful experience!

Must find time to go back one of these days. The last time I was there was way back in the late '90s still. I do remember loving this lake so much and the view! Spectacular. Nice to know that they maintained the cleanliness! Beautiful captures!

is this heaven or close encounter with nature...lovely pictures and for sure you really had a great time....ka miss mag bakasyon:)


Thank you for sharing!

There is no excuse not calling it a paradise.

Those white rugged rocks under water looks like giant sponges!

What a superbly beautiful place ! I would be in there like a shot with the water so clear and little fishes all around me.
A really beautiful post. I wish I still had time to go to this wonderful place.

It is breathtakingly beautiful! No wonder it is venerated by the tribals.

You're right - it IS paradise! I hope the rules and regulations on the sign actually help preserve it!!

Awesome photos for an awesome place. Wow!
thanks, namaste, Carol (A Creative Harbor) linked with OWT ^_^

What a wonderful place to visit! The views are spectacular and the water looks most inviting! You must have felt rejuvenated after the trip!

wow, what a place. Looks like a place you can stay for weeks and always find new things to explore. :)

Great shots too. Love the effect the water does to the boys legs. :)

the place looks heavenly and so inviting. i wish i were there now.

What a heavily series of gorgeous photos. This is such a beautiful spot to of swimming and walking. The landscapes are to die for. You live in such a wonderful part of the world. The shots you share with us always amaze me with the beauty of your country. genie

luna, you're so blessed to have experienced this paradise! the place particularly the lagoon looks magical! fantastic!

i love the boats, i like the picture with the boy in water. nice, nice, nice!

hi, I´m opening up a new watery meme. I call it NF Waters and you can find a testrun here if you like to check it out:
http://nfmemes.blogspot.com/search/label/NFWaters

Awesome place, WW meme isn't up yet so we cannot add it-hope she puts it up soon. Great shots!

One of he most beautiful places I have ever seen. Marvellous pgotos!

Wonderful water views and such rich colour in the area! Awesome place!

Wow, this is absolutely fantastisc!!!

What a fabulous world!

It's all About Clark said...

oh! my! that place is heaven.... kakaingit..hehe

Thanks for the visit anyway.

They've said it all. Ang Ganda..... And as always you've captured and presented our country in a diff'rent light. I'm so proud of what you're doing Lowla, na-iinggit ako sayo. I wish I could do something as noble as this. Oh meron kana Nationalistic value aside from the social awareness dahil sa yong bagong endeavor. Hay how I wish I cud take the kids dito pero parang di ko nga kakayanin ung pag akyat sila pa. Will take them to the subterranean underground river first, I want them to experience and see the magic inside the cave. ;-)