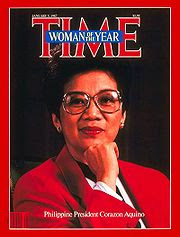 For what is it to die but to stand naked in the wind and to melt into the sun? And what is it to cease breathing but to free the breath from its restless tides, that it may rise and expand and seek God unencumbered?

~ Kahlil Gibran
It has not stopped raining, its as if the heavens are also mourning the death of Cory Aquino. I woke up this morning to the news of her death, and I shed tears for Tita Cory, as she was fondly called by Filipinos. A few days ago, my colleagues and I even talked about her over coffee, about her illness and her legacy, and we knew that death was imminent. But even as her passing was not unexpected, it is still astonishing to know that the icon of our democracy was truly gone, forever.

Tita Cory became the first woman president when I was 21 years old. I didn't understand women's empowerment until Cory ran for president and EDSA Revolution toppled the Marcos dictatorship. Democracy for me at that time was just an idea, a big word I overheard from family debates at the dining table. Even when my brother became an activist and went to the mountains, I couldn't appreciate what he was fighting for. Tita Cory opened my eyes to the possibility of an ordinary person making a difference, and that freedom and peace are inseparable.

Because of her moral leadership, simplicity and sincerity, Tita Cory endeared herself to many Filipinos. She embodied the standards that we should all hope to achieve in our lifetime---privileged but selfless, simple yet strong, unassuming but decisive, prayerful yet practical. Politics did not shape Cory Aquino, her indomitable spirit was inherent long before she became president. I admired her unshakable faith, her grace and love for this country.

It is a sad day for Filipinos who have lost an inspiring person, but I am relieved that death had finally ended her suffering. Rest in peace, Tita Cory.

Faith is not simply a patience that passively suffers until the storm is past. Rather, it is a spirit that bears things---with resignations, yes, but above all, with blazing, serene hope.

The country and the world mourns the loss a great woman. Luna, very well written and a very fitting tribute.

Thank you, Ebie. I hope it would stop raining so we could visit her wake later tonight or tomorrow.

Let's pray for her..May she rest in peace...

Luna Miranda, I appreciate your words shared here. I was very young when all that transpired. As an American, we only saw what the press wanted us to see. I am surprised to hear of her passing. I thank you for sharing.

Nice tribute. We will surely miss her.