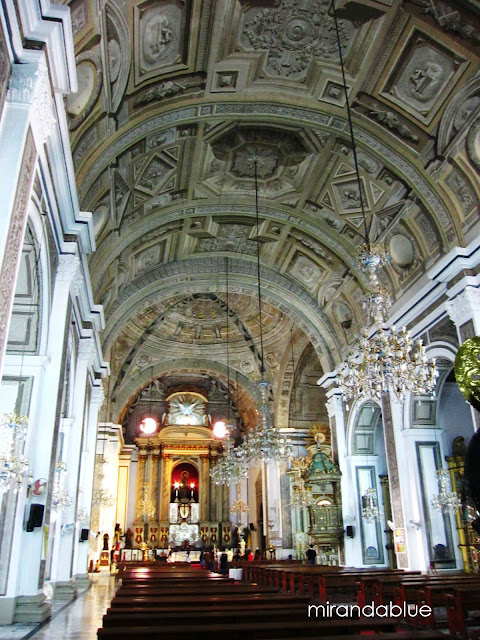 I was in San Augustin Church last month to accompany balikbayan (Filipinos who live abroad) friends.  My friends who live in London were here for 2 weeks to attend a relative's wedding.  This church is one of the most popular wedding churches in Manila.  In fact, my best-friend wanted to get married here almost a decade ago, but they were fully booked for over a year when we inquired.

Originally known as "Iglesia de San Pablo", San Agustin Church was founded by the Augustinians in 1571, built in 1589 and completed in 1607.  It is the oldest stone church in the Philippines, and was declared a UNESCO World Heritage Site as one of the Baroque Churches in the Philippines in 1993.
During the Seven Years' War in 1762, San Agustin Church was looted by the British forces who occupied Manila.  It was renovated in 1854.  The church was also the site where the Spanish Governor prepared the terms of the surrender of Manila to the United States of America in 1898.
In World War II, the Japanese turned San Agustin Church into a concentration camp for prisoners.  Hundreds of Intramuros residents and priests died here during the final days of the war.  Among the seven churches in the walled city, San Agustin Church was the only building left intact after the destruction of Intramuros during the Battle of Manila (1945).  The  present structure is actually the third  to stand on the site and has survived 7 major earthquakes.
San Agustin Church has 14 side chapels and a magnificent trompe l'oeil mural on its ceiling and walls.  Trompe l'oeil is French for fools the eye,  an art technique involving extremely realistic imagery in order to create an optical illusion that the depicted objects appear in three dimensions.  The nave art was painted by two Italian scenographers Giovanni Dibella and Cesare Alberoni in 1875--scenegraphers are artists who paint backdrops for operas.
It was practiced in the last centuries for prominent persons to be buried inside this church---the painter Juan Luna, Spanish Governors, statesmen and archbishops.  El Adelantado Miguel Lopez de Legazpi, founder of the city of Manila who died in 1572 was entombed in one of the chapels while wealthy patrons of the church paid for their final resting place here. 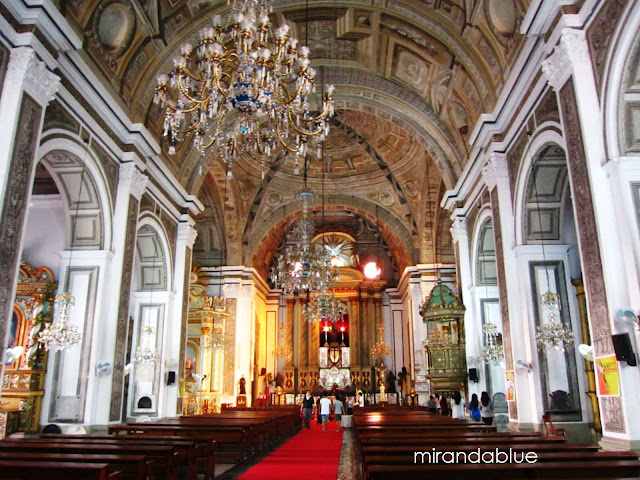 Linking to Our World-Tuesday
Posted by Unknown at 8:08 PM

"The more we see the world, the richer we become."- love the words and the header :-)

I find peace always in places of worship....wonderful photos of a beautiful place, where those who have faith and live the word find true happiness...happy Easter!

Beautiful photos from the church.
Wish you a nice week.
Greetings from Hilda

I love the words and your header too! What a beautiful church and sad, but amazing history. Thank you for sharing them both! Hope you have a great week!

Great shots of this magnificent church, MIranda!
I too love your header and the quote.

Great shots of the beautiful church.
I love your header and quote too.

How very interesting to read and see !

Please have a good Tuesday.

It would certainly be a magnificent church to be married in!

Lovely church and photos. Great post, thanks for sharing. Have a wonderful day.

Hi there - that really is some building. I can see why people would want to use it for a special day.

the church looks remarkable. thanks for sharing the beauty.

I can see why it's booked for over a year for weddings! Thanks for giving us the history of this church:)

It is a beautiful church, I can see why there would be so many wedding there. Lovely photos, thanks for sharing.

A beautiful church. What history it has seen. If only walls could talk what stories they could tell.

Hi Luna, San Agustin and Manila Cathedral always put me to shame whenever i see their photos. I've been in the metro for a long time but haven't yet seen them. Imagine seeing old churches in other countries neglecting my own! What a shame!

Grand interiors! What a history it has! So glad it survived all natural and unnatural damages.

Those interiors are marvellous!