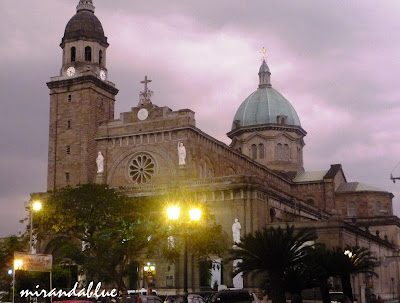 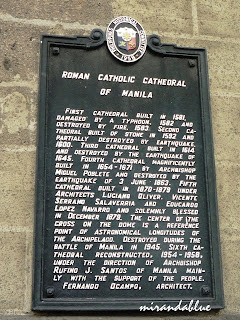 I seldom wander in this part of Manila, and if I did, it's purely by accident or for an important occasion. The last time I was inside the Manila Cathedral was during the wedding ceremony of a business associate's son. That was eons ago. A few times before that wedding were mostly coincidental---like a foreign client happened to notice the cathedral on our way to a showroom, and he wanted to see it. Another time was when my friends and I had a community project at Baseco Compound in Tondo, and we all agreed to meet at the cathedral grounds at 6 in the morning.

This particular visit to the Manila Cathedral was also unplanned. I was driving along Roxas Boulevard one Sunday afternoon when my mother mentioned that she's never been to the cathedral since the early 60's. OK, let's go and say hello!

The cathedral has a long history of construction and re-construction. The cathedral was destroyed five times since its construction in 1581. The original structure was damaged by a typhoon in 1582, demolished by fire in 1583, rebuilt in 1592 and was leveled by an earthquake in 1600. It was rebuilt for the third time but was toppled again by another earthquake in 1645. Again, it was reconstructed but was severely damaged in 1863 by another strong earthquake. In 1880, another earthquake crushed most of the cathedral including its huge bell tower. The fifth cathedral was rebuilt in 1870-1879 with the center cross of the dome being a reference point of astronomical longitudes of the archipelago.

The edifice stood for more than half a century until World War II erupted and bombings ruined parts of the cathedral. The current Manila Cathedral was constructed in 1954-1958 under the supervision of National Artist for Architecture, Fernando Ocampo. It was elevated into the rank of Basilica Minore in 1981 by Pope John Paul II.

I would have wanted to take more photos of the naves, statues and carvings, but there was an ongoing wedding ceremony that afternoon. Will re-visit the cathedral soon. 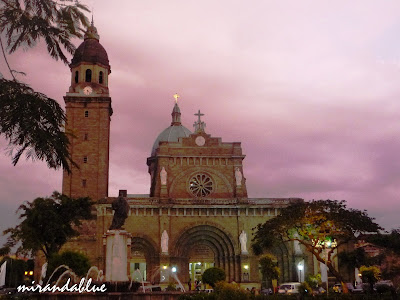 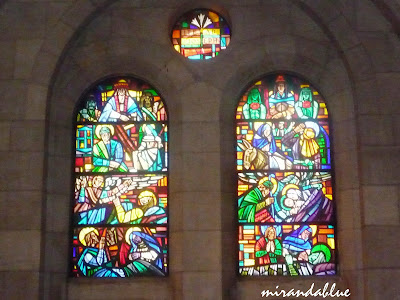 stained glass windows in the Chapel of Saint John 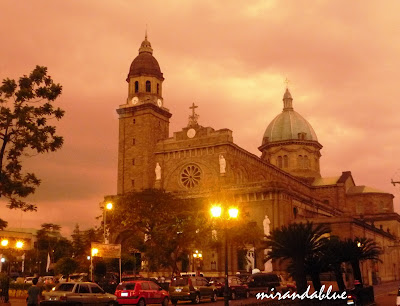 the cathedral at twilight

More about the cathedral here.
Posted for Weekend Snapshot
Posted by Unknown at 12:15 PM

Lovely glass paintings. And what an amazing story of the series of constructions.

Beautiful. I hope this building will b well preserved for generations to come. They don't make buildings like this any more. A national heritage

Love the architecture and the stained glass. In spite of all the destruction and reconstruction, it has survived.

i really like Manila Cathedral and I'll never tire going there each time i get to Manila. You capture it beautifully at night time.

one of the best church the philippines has to offer. ang ganda talaga nyan.

wow a real monument which is blessed by mother nature after so many times demolished due to calamites still it is rebuilt really charmisatic,....great job Miranda

I read somewhere that our beloved banana republic is a place where you experience 300 hundred years of Catholicism and 50 years Hollywood. (*_*)

I've been to this pace on once back in grade school. I want to see the place again. thank you for sharinf and for the visit as well. Till next WS!

that is definitely one of the most if not the most beautiful church exterior in the philippines. one of my favorite.

hi, dong! it is, indeed, a beautiful structure. i noticed that the facade is similar to Notre-Dame Cathedral in Paris.:D

mmn...when will i ever see that place?... the idea never crosses my mind everytime i'm in manila. i saw pics of the cathedral interior from my ex-brother-n-law's wedding albums and their vid, but seeing the real thing i'm sure will be an awesome experience.

An interesting place to visit..hope i can visit this place one day. :) Dyan ba kinasal si sharon and gabby noon?

This one really has a great architectural design

Awww, that's the Church where I got married! I love your shots! Thanks for sharing.

a good place that can increase the inspiration for all of us ..