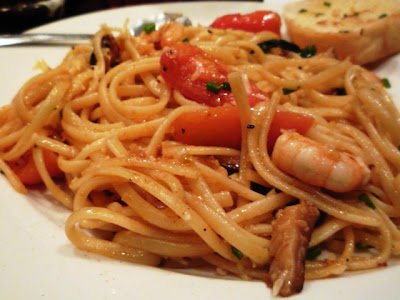 My first pasta dish after the New Year---a spicy seafood marinara from Texas Roadhouse Grill in Bonifacio High Street. Texas Roadhouse Grill is my current favorite restaurant in High Street...love their food and the prices are reasonable. I usually order light for dinner---a lone ranger plate of their Southwestern Cobb Salad and grilled tuna belly, but the other night I had a carbo craving after a long day at work. This is my reward.:D

A bit of trivia: Marinara sauce is a popular, robust Italian sauce made with tomatoes, onions and herbs. This red sauce tends to be a bit spicier than other standard tomato sauces, with large amounts of garlic, oregano, basil, and even chili pepper. Marinara sauce originated with sailors in Naples in the 16th century, after the Spaniards introduced the tomato to their neighboring countries. The word marinara is derived from the word marinaro, which is Italian for "of the sea". Because of this, may people mistakenly believe marinara sauce includes some type of fish or seafood. However, marinara sauce loosely translates as "the sauce of the sailors" because it's a meatless sauce extensively used on sailing ships before modern refrigeration techniques were invented.

Join us at Food Friday
Posted by Unknown at 10:10 AM

I love seafood pasta! There's an Italian cafe near where I work and whenever my budget allows, I go there to have a plateful.

thanks for playing, Luna
happy ff

i have the recipe for marinara, but i am afraid to try it because we (the family) aren't really used to the taste. i hope i can have the courage to cook it.

My FF entries are posted here and here.

Whe i tasted marinara in our only ritzy italian resto here sabi ko sa sarili pina-anghangan lang nila itong pasta dish. Well, to be fair naman, the prawns in their marinara were just abundant! that i guess made the price worth it! Thanks for that trivia about the dish, Luna!

you can at least try it, jhen...malay mo, your family might like it. maraming pinoy mas gusto ang matamis na tomato-based sauce...marinara is not sweet kaya siguro di nila masyadong gusto.

i wish i can have seafood pasta everyday, iska! grabe nga temptation kasi there's a really good pasta scampi on the 4th floor of my office building. hayyyy!:D

Super late na ko for FF! Mamaya pa...Congratulations for winning the contest over at Dong Ho's! I wondered who the man in camouflage was! :D

I love seafood pasta! Your post reminds me I should eat one today ;) photo looks YUMMY!

thank you, G! the man in camouflage was probably some resident who wore a camouflage that day without thinking about it...paranoid lang talaga ako (haha)! but when you're in the middle of nowhere, kakabahan ka talaga.:D

will check out your FF...

Great day for us Food Friday Eaters :)
Thanx for the Visit :)

That pasta dish in Texas Roadhouse Grill is good. Yum!