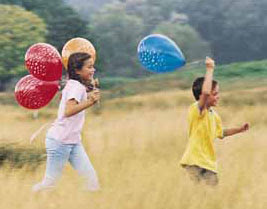 "The beginning of knowledge is the discovery of something we do not understand."
~ Frank Herbert
I started school when I was four. I do not think it was because I was especially smart. But I think my parents wanted me out of the house because I asked too many weird questions. I remember being obsessed with the indentation between our nose and our lips. I overheard an aunt (my mother's cousin) saying that people with deeper indentation are tamawo---fairies who inhabit anthills, they pretend to be humans, attend church but leave before the benediction. So I examined everybody I see at home, in the bus, at the market, church, even the neighbors. And I would ask my elders if they agree that this and that is a tamawo---his or her indentation is much deeper than ours.

Kindergarten school was my whole world. I loved my school uniform---a blue jumper and pink blouse with puffed sleeves, lace socks and black shiny shoes. My bag was full of crayons, papers and pencils and ten pieces of pandesal with peanut butter or Milkmaid condensed milk as palaman. My grandfather didn’t want me to have pocket money to school, worried that I might cross the street to buy something and be run over by a bus. I savored each day I spent in kindergarten…it was my little personal launch to a life of knowing, of discovery.
From then on, I discovered books, comic books, magazines. I guess my siblings and I are lucky because we grew up in a house full of books and reading materials, where people debate and argue about anything and everything at the dinner table. My aunts and uncles are all opinionated, my grandfather was the ringleader. And even we kids were encouraged to join into their debates. The only quiet member of the family is my grandmother (she’s now 95 years old). A younger aunt would ask something about her physics assignment and everybody would tease her about how low her IQ is.
Then my grandfather would launch into his speech that we keep our interest in everything; that we’d be curious about how the natural world works and even if we know that a mystery may not be solved in our lifetime, we’ll try anyway. I don’t remember my grandfather's exact words but he was always passionate about not being afraid to walk your mind…that it is like the universe; it does not walk into a limit but it creates the space as it expands. He reminded all of us at the dinner table that we were all born with talents but what we do with them is yet undefined and will be our entire life’s work. He demanded that we seek where and how we can be most creative. To work hard and set our sights high but pay attention to the little things.
I learned from these debates that intelligence is only liberating if it frees yourself and perhaps others, of ignorance. If not, then it is just overbearing nuisance and therefore a curse, not just to me but to others. He emphasized that the pleasure in finding things out is deeper than the recognition by any award, and that knowing and understanding make living so worthwhile. He wanted his children and grandchildren to work from a desire to discover and imagine how nature, in its many aspects, does its job of creation so well in an endeavor called science — one of the greatest pleasures of being human — worthy of any pursuit spanning entire lifetimes…Or something to that effect… Now I think all these maybe were a combination of my grandfather, Charles Darwin, Albert Einstein and Richard Feynman’s wisdom.
We were all in awe of my grandfather (we called him Lolo Toñing). People admired as well as feared him. He had a volatile temper and didn’t mince his words for the sake of anybody’s feelings. We called him Bonifacio behind his back because he always carried a bolo knife around. I realized when I was a bit older that he used it in tending to his crops; he turned into a farmer of some sorts after his retirement. He was a voracious reader, a coffee drinker, a smoker and a great storyteller to us kids…of his adventures, black magic, World War II and his encounters with Japanese soldiers, among others. One unforgettable story was the mandragona tree in Spain---where you take its deepest roots, then burn it on a crossroad where blood was once shed, kill a baby in the middle of that crossroad and you will see the devil face to face, even talk to him. Not exactly a bedtime story for kids…but I enjoyed it. I loved the feeling of my little heart beating faster under my chest.
Then there’s the story of a black cat…take the black cat by the back of its neck and let it stare at a noonday (12:00 noon) sun. When the cat’s eyes are shedding tears, wipe the cat’s tears to your eyes and you will see everything the cat sees. My little brother and I tried it one time but the cat was very skittish and we couldn’t get hold of it. When we told Lolo Toñing about the cat incident, he admonished us that cats see things that would scare most humans, and would even drive us insane; he made us promise not to try it again.

Lolo Toñing would sit in his bamboo lounge chair after dinner and we kids would sit by the floor. Stories about aswangs (a generic term to all types of mythological creatures, ghost, witches, shape shifters, monsters) were our nightly entertainment before going to bed---we had no TV. He told us about the kapre, a big black hairy creature smoking a huge cigar, and living in the old kapok tree at the backyard. During the full moon, I would nervously peep from the window hoping to see the kapre. I comforted myself and thought of it as our night guard, watching over us while we sleep.

My grandfather also narrated that he once spent a night in a house of a maranhig, a living dead with the strength of ten persons. The man died but somebody who resented the dead man brought him back to life by applying mercury to his scrotum. The maranhig tickles his victims to death and turns to dust when it gets wet and decomposes into worms. Lolo Toñing barely escaped with his life. Then he would tickle us until we were all shrieking with laughter.

And I would never forget his encounter with a santermo (St. Elmo’s fire) when he was a young man. A ball of fire that changes its shape chased him until he dived into a well to get it off his back. He later explained to us the scientific fact behind the St. Elmo’s fire. But my young mind preferred the supernatural version of the story.

I believe that the stories from childhood set my sights on knowing and discovering so much more. I’m always curious and interested…haven’t lost the sense of wonder. I embrace the larger world with the march of my own mind.
"Imagination is everything. It is the preview of life's coming attractions."
~ Albert Einstein

You're fortunate to have Lolo Toning, a wonderful storyteller. My mom's father also delighted in telling us stories :)

I think it's a blessing to grow up in a liberal and intellectual environment as you have.

Indeed, I count myself lucky. Lolo Toning's stories are now entertaining his great grandkids. But his greatest legacy is the wisdom he shared with us, his family.